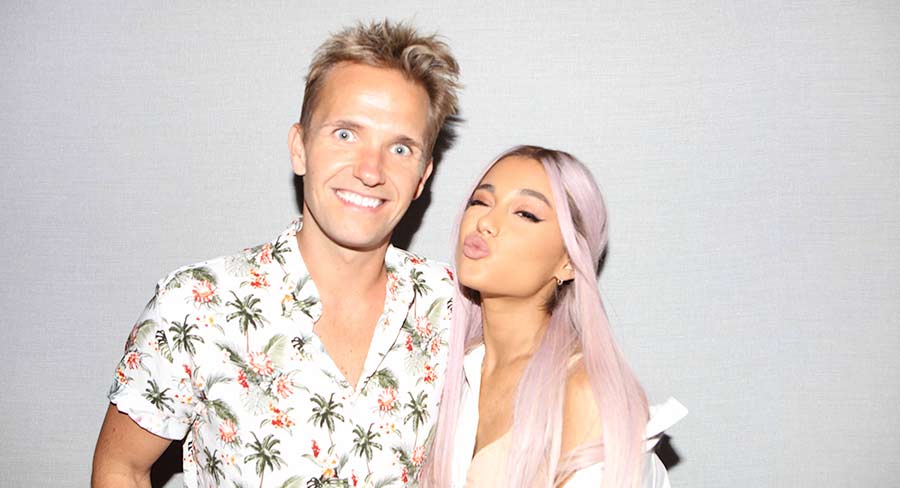 Nova network award-winning and ratings-winning evening host Smallzy has just returned from a special Red Room USA edition, which took listeners to the US to spend time with Shawn Mendes and Ariana Grande.

But before he got time to settle back in to his seldom-used Sydney home, he was off again, this time to Perth where he spent time with Katy Perry as she starts her Australian tour.

The Katy Perry exclusive radio interview will be packaged into an hour special to run across the Nova network tonight. After his audience with Perry, Smallzy said: “It was great to go backstage and hang out with Katy before her first show. I’ve had the pleasure of interviewing her a number of times over the years and she’s as gracious today as she was the first time we met.” The Red Room USA tour was originally planned as a return trip to Los Angeles. But when Grande couldn’t meet them in Los Angeles because of a schedule change, a New York leg was added to spend time with the diminutive pop star.

“No one ever complained about having to go to New York for a couple of days,” Smallzy told Mediaweek.

Mendes performed for the Nova tour party in Los Angeles with a full band of 12. The gig took place inside the legendary Village Studios, which have been home to artists the calibre of veterans from Fleetwood Mac, The Rolling Stones, B. B. King and Bob Dylan to younger artists like Lady Gaga, Coldplay, Taylor Swift and John Mayer.

“You name a classic album and the chances are it was recorded there,” said Smallzy. “It seems as if everyone has been through there. We were in their main studio with high ceiling and timber floors. They had magnificent red curtains hanging in there too, which was perfect for the Red Room.

“I got to interview Shawn in the room where he wrote and recorded some of his current album with John Mayer. The fans loved it because if was a full concert experience with his band.”

The following morning Smallzy, the listeners and the Nova entourage flew out to New York. The touring party included 12 competition winners, which was an exclusive group, and much easier to handle, than some of the bigger groups who have been lucky to embark on the legendary Nova Red Room Global Tours.

“They hit New York… and they hit it hard,” Smallzy said about the enthusiastic Nova listeners. “They did the tourist spots during the day and then went out to dinner and drinks. To be honest they put some of us from Nova to shame after we said we had to call it quits. They were very keen to keep going.”

The Ariana Grande experience didn’t include a live performance, but Smallzy said they ended up being blessed with more than they expected.

“As well as a listening party, Ariana and her people wanted to spend more time with us. After what was a very challenging year, she has been somewhat guarded in terms of her media exposure since then. We were very lucky that everybody got to ask her questions in what turned into a Q&A session with me hosting. I was roaming around the audience like Oprah with a microphone as people asked questions. She came across as being very genuine, transparent and honest.

Smallzy has calculated he has hosted most of the 200 Nova Red Room events both in Australia plus all the international editions.

As of survey four 2018, Smallzy and his executive producer Zach La Cava have won 39 consecutive surveys as the #1 national FM evening show. It’s the longest consecutive run for an FM program currently on air – either in a local metro market or nationally.

Smallzy didn’t want to predict he will win the next survey too and possibly jinx five years of survey wins, which should happen after the results of survey five 2018 are released.

While Smallzy ranks #1 nationally, he noted the challenges that come with that – he doesn’t have the chance to be hyper local and tap into what is happening in any one of the metro markets he broadcasts to.

Smallzy’s Surgery airs in a challenging timeslot (7pm-10pm) given the number of other attractions for people during what is also TV’s primetime.

“You are constantly under pressure at the younger end and it is a daypart whose audience has traditionally had its finger on the pulse more than others. It is humbling to be close to having those people making us #1 for five years.”

As to what might happen if he does go 40 wins in a row, Smallzy wondered if he’d get a gold watch. “If anyone at work is reading this, I like Rolex – it’s a good brand.” [Laughs]