Newspaper media reaches 94% of all Australians, or 16.5 million people, with printed newspapers still commanding the largest share and digital readership growing at the fastest pace, today’s emma (Enhanced Media Metrics Australia) data for the 12 months to April 2015 has shown.

National and metro printed newspaper media reach 12.4 million people over a four-week period, while community newspapers are firm favourites with Australians, with an audience of 7.9 million, or 44% of the population.
Printed newspaper media reaches seven in 10 people, or 3.4 million, aged under 30, with digital closing the gap at 65% of young people, or 3.2 million. While older demographics still prefer print, digital has a strong footprint among those aged 70+ at 990,000, or 47% of this demographic.

Digital newspaper media readership continues to grow, with PC and laptop readership still leading with an audience of 10.6 million, or 59% of the population. It was followed by mobile at 3 million, or 17% of people, and tablet at 2.7 million or 15% of people.
Mobile once again leads newspaper media readership growth, rising by 15% year on year, followed by table at 5% and PC/laptop at 4%. The digital readership growth was spearheaded by those aged under 25, up 12% year on year.

“The emma data clearly shows that newspaper media continues to reach nine in 10 Australians, who still consume the majority of their news and information from printed newspapers. The ability of newspaper media to inform and influence their audience is unrivalled and this is true for cities, regional and rural communities,” said The Newspaper Works CEO Mark Hollands.

The Sydney Morning Herald continues to lead with the highest cross-platform readership, 5.48 million readers, followed by The Daily Telegraph on 4.48 million and the Herald Sun on 4.17 million. 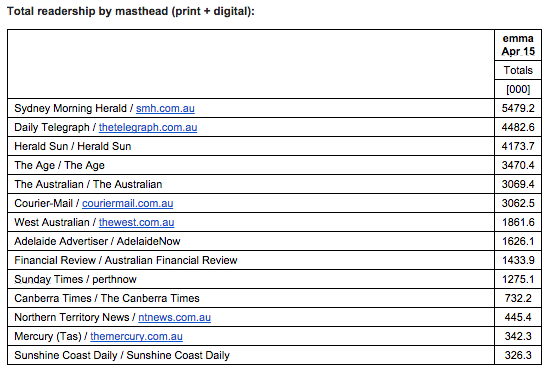