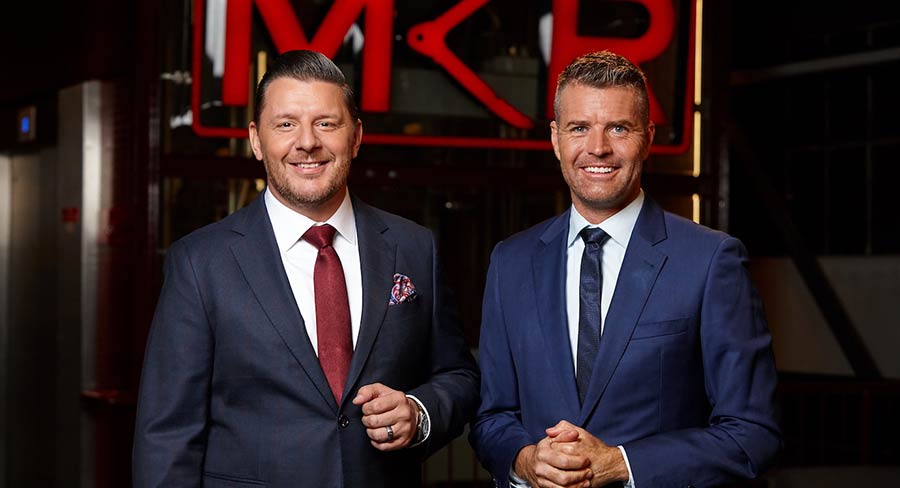 Mediaweek has also released separate podcasts on PodcastOne with both Pete Evans and Manu Feildel.

Mediaweek has also released separate podcasts on PodcastOne with both Pete Evans and Manu Feildel.

Pete: Rikki is a well respected and much loved executive producer. He’s wonderful at creating concepts and bringing them to reality (pardon the pun). He’s a true master of the genre. It is always a privilege to catch up with him and I owe him a debt of gratitude for giving us this opportunity.

When I did the audition I think I got the job the first day. I then did a chemistry test with another host a couple of days later, but it didn’t feel right.

I hadn’t met Ricky yet, but I looked at the call sheet and rang him up. [Evans call to Proost] “We haven’t met, and thanks for the job. But the person we are working with, I don’t think [as a duo] we will be strong enough to go up against MasterChef. There is only one person that I know of in the country that I think would make a great partner for me.”

I’m very studious of my industry and I keep a watch on the hospitality world like a hawke and I said for this show to work you need someone like Manu Feildel.

Rikki laughed and told me Manu had done three pilots with Seven, but they had to sideline him because some people thought his accent was too strong which is why we reauditioned.

Manu and I had been mates for many, many years prior and I just knew…I like to work with big, colourful personalities when there are two of us onscreen.

Someone else like me isn’t the right formula. I love working with bold people. It allows me to be myself and be comfortable with that.

Evans didn’t always get the roles he tried out for

Pete: My first day ever on television I auditioned for Foxtel and a show called Home. It was a very simple premise – there was a landscape architect called Brendan Moar, a stylist called Shannon Fricke and then they brought me in as the cook because somebody pulled out at the last minute. I was the shyest person in the world. They asked me twice to come in because they loved the food I was doing in my restaurant.

I’ll never forget the first audition day when they had someone to train me.

They told me I was too boring. “Can you be a bit more flamboyant like maybe Jamie Oliver.” I told them the only person I can ever be is me. Now 10 years later I am still being me, so far so good!

Even the seemingly easiest things can take some time

Pete: When we arrive in the car outside a [contestant’s] home – that scene can take the longest to film out of anything. We do it about five times in and out of the car to get all the different angles. That is part of the success of the show – the high production values and they don’t cut corners.

Even ringing the doorbell can take some time. We walk up to the door, press the button and do it with all different angles. Then there is the entrance with the teams – hopefully we get that in one take. Sometimes it takes us two takes to get the angles right.

Then it is game on as we wait for the different courses.

One of us always visits the kitchen for entrée, main and dessert. Maybe they might only show one visit, sometimes none.

When the good stuff happens at instant restaurants

Pete: Manu and I leave the table for a substantial amount of time. We find the contestants open up a little bit more amongst themselves. When we are at the table it is MKR. When we leave the table to go into the kitchen, or to talk to production, that is when they can be more themselves.

Best parts of working on My Kitchen Rules every season

Pete: The first episode is always the best because we have never met the teams.

The viewers get ads leading up to the first episodes and they are getting to know the contestants. We sit down without knowing anything about them.

The first time the contestants cook for the public in challenges is always great.

The ultimate instant restaurants are also fantastic which is when they get to cook in their homes again. At that stage of the series they are right into competition mode.

The grand final of course is a highlight when we see the results of all the hard work and the experience gained across the series. This year we have changed it a little as to how the teams get to the semifinals and it is brutal. It was hard for Manu and I and a brutal way to pick the last four teams. There was so much pressure both for us, and the teams.

The lowest points are when we have to say goodbye to teams. It is very hard to tell a team they might be going home because they haven’t put enough salt on a dish. Something so petty can be the difference between winning and losing. I can be gut wrenching for us. Some people think it is all glamorous for us, but it is not as easy as they would think.

What are the days on My Kitchen Rules you enjoy most?

Manu: It is the day when contestants finally understand what they are there for. The first few weeks are holiday time. They are all away from their families and their work. They are meeting new people and making new friends.

We have to remind them that the instant restaurant round is actually the easiest part of the competition.

When the people realise it is a real competition they start working their hardest and it is when they start cooking some great food.

What are the hardest days during a My Kitchen Rules shoot?

Manu: They are long days, some days maybe two challenges in a day. We might be hot, sweaty and exhausted and half of the food that you had was not great.

It is a lot more than what you see on TV. We have big responsibilities and it can be tiring.

Tomorrow: What people don’t always understand about the MKR format + trouble in the kitchen