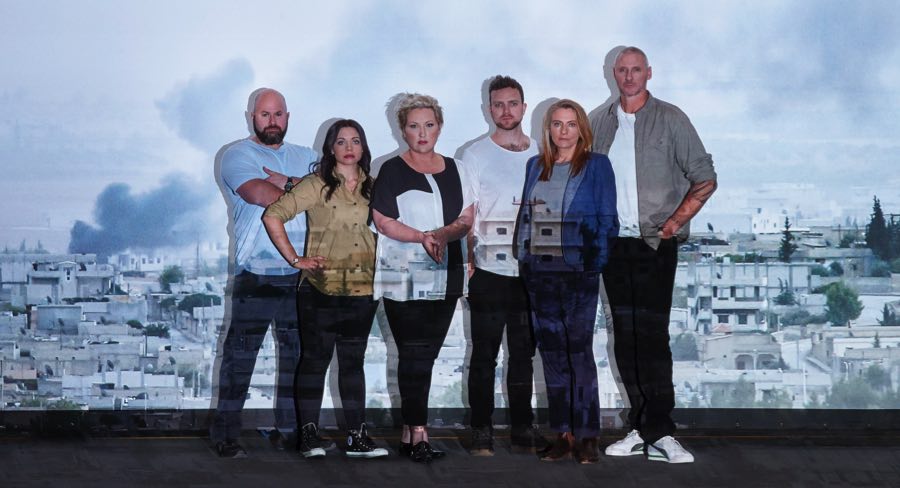 • The fourth season of the award-winning show will screen in October 2018.

SBS has announced the first wave of participants for the fourth season of Go Back To Where You Came From. For the first time in its history, the program will be broadcast live on SBS.

Well-known media personalities such as comedian Meshel Laurie, former AFL player and breakfast radio host Spida Everitt, and writer Gretel Killeen have been confirmed for the show. Everyday Australians including 41-year-old Steve from Adelaide, 29-year-old Gareth from Bathurst and 24-year-old Dannii from Townsville will join the celebrities on the program. Details on more participants for the show and locations at which they will be sent are yet to be announced.

Produced by CJZ, Go Back To Where You Came From Live aims to take the pulse of the evolving global refugee crisis in real time and challenge the views of the participants about the issue.

The refugee crisis continues to be the world’s greatest humanitarian disaster with 68.5 million displaced persons worldwide.

Over three nights from October 2 to 4, viewers will follow events live from conflict hotspots and frontlines across multiple continents, witnessing the complexity of mass human migration and its ripple effects in 2018. Journalist Ray Martin and SBS World News’s Janice Petersen will be stationed in the SBS studio in Sydney.

In its lifetime Go Back To Where You Came From has collected two Logie Awards, an AACTA Award, an International Emmy, two Rose d’Or awards, and a UN Peace Award.

SBS director of television and online content Marshall Heald said: “Using state of the art technology to broadcast from the heart of the global refugee crisis, Go Back to Where You Came From Live is one of the most ambitious television events in Australian broadcasting history. By taking audiences to the frontlines of this crisis in real time, the latest instalment of SBS’s award-winning series will capture a snapshot of the issue as it develops with a sense of urgency befitting the subject.

“Opinions will be challenged as we witness stories of adversity, resilience and an optimism for a new life from refugees and asylum seekers at home and abroad. Putting this human face on a seemingly unsurmountable problem and encouraging a national conversation is what SBS does best.”

CJZ creative director Michael Cordell said: “Covering the global refugee experience in a live television event is probably the most difficult project we have attempted. Despite the challenges it’s hard to imagine a more important story to bring to Australian audiences. The immediacy and veracity of live TV will make this incredibly compelling.”

The fourth season of Go Back To Where You Came From received a principal production investment from SBS in association with Screen Australia and has been financed with the assistance of Create NSW.

Sally Caplan, head of production at Screen Australia, said: “It is exciting to see this award-winning series return in an innovative and more technologically advanced format. SBS has proven itself to be a leader in event television, with bold documentaries that spark national conversations on complex issues. With new hosts, and new ways of bringing these stories into Australian living rooms, I’m sure this series, produced by the experienced team at CJZ, will resonate with audiences and have an impact beyond broadcast.”

Sophia Zachariou, director of screen investment, engagement and attraction at Create NSW, said: “As a champion of diverse storytelling, we are hugely excited to be involved in what is set to be a timely and epic broadcast experience. Through incredible access, Go Back Live will shine a unique light on the global refugee crisis to capture the attention of audiences across the country and challenge the perceptions of many. This is such an exciting technological feat for SBS and we can’t wait to watch the experience unfold across the three nights.”

Getting to know the views of the participants

• Meshel Laurie: The comedian and TV presenter is an active supporter of asylum seekers. Her Buddhist spiritualism is a motivator for her to give back to communities around the world.
• Spida Everitt: The ex-AFL player believes refugees should only come in “the right way”, should work and offer something to Australia. Everitt holds the view that African gangs are a problem in Melbourne and worries for the safety of his daughters who live there.
• Gretel Killeen: The writer believes Australia’s treatment of refugees is barbaric.
Steve: The 41-year-old Adelaide local is a prison youth worker and anti-refugee provocateur, who thinks Australia’s stop the boats policy is effective. He says refugees in Australia are country shoppers, who head to Australia for economic reasons.
• Gareth: The theatre student from Bathurst comes into the show with mixed views. While he believes indefinite detention is not humane, Gareth says we can’t just open the floodgates and we need to protect our borders.
• Dannii: The 24-year-old from Townsville is a young conservative, who works at her local church and believes in protecting Australia’s cultural values. She thinks our current policies are spot on and shouldn’t be altered.