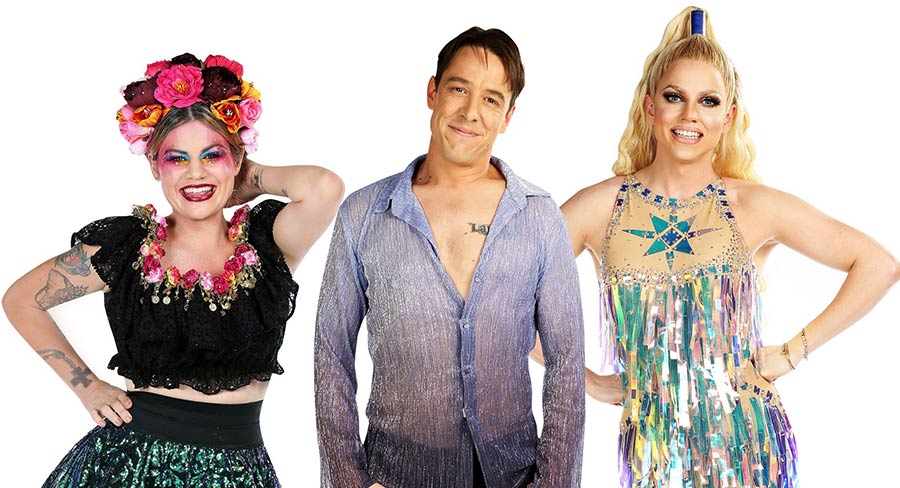 • From Dancing with the Stars to Now Apocalypse to Neighbours

Courtney Act is on track to win Dancing With The Stars this Monday on 10. Now a TV veteran, she has now done Australian Idol (semi-finalist), RuPaul’s Drag Race (runner-up) and Celebrity Big Brother UK (winner). Courtney’s creator Shane Jenek identifies as being pansexual and polyamorous, and he is a fabulous spokesperson for modern gender politics.

Netflix gets that kids are totally cool with all this, and that’s why they have a slew of sexually ambivalent shows about teenagers. Its biggest hits include Sex Education and The Chilling Adventures of Sabrina, with the former being set in a high school and in the latter, Sabrina (Kiernan Shipka) has a pansexual warlock cousin called Ambrose (Chance Perdomo). The New York Times has described these shows as having “a refreshing lack of angst” about such subject matter, and the same could be said about its audience too.

But the craziest of them is on Stan. Now Apocalypse, from indie filmmaker Gregg Araki and executive producer Steven Soderbergh, is about some sexy people in LA but because it has been inspired by Twin Peaks, there is also Henry Rollins and reptilian aliens having sex.

There are no aliens in Neighbours – yet – but they are still adventurous. Actress Mavournee Hazel (Piper) revealed she was demisexual, and soon Ramsay Street will feature its first transgender character to be played by trans activist Georgie Stone. It was way back in 1973 when Carlotta paved the way for them all, playing Arnold Feather’s girlfriend in Number 96.

Recently a passer by yelled out to Carlotta that she was “that bitch from The Bold and The Beautiful”. Think about it. He meant to say Beauty and The Beast, which also screened on 10 daytime. Hilarious. Talk about getting confused – let’s hope he never runs into Courtney Act.