How to make Google pay its way for media content

This week Josh Frydenberg is sorting out the national economy; next week it’s how to get the digital behemoths to pay fair compensation to media companies for their content, reports The Australian’s John Durie.

Google crossed a Rubicon in June, declaring it would pay media companies in Germany, Brazil and Australia, but left open how much, when and how.

Last year’s ACCC digital platforms inquiry recommended a voluntary code of conduct between the two sides, but by April, with no agreement visible, it told the government the code should be mandatory, which meant it had enforcement power.

Next week’s ACCC code will be a draft but the final code is expected to be legislated by the end of August, so the draft is close to the proposed final version and will be more than game playing.

The free-to-air broadcasters including Nine have recommended a collection agency like the Copyright Agency, with the money allocated based on investment in journalism.

News Corp has suggested direct negotiations between the publishers and the platforms.

JobKeeper will be extended until March but split into two tiers

There is some good news for media people looking for work and those on subsidised salaries, reports The Sydney Morning Herald’s David Crowe:

Millions of workers will keep receiving the JobKeeper wage subsidy until the end of March in a dramatic extension of the $70 billion program under a fresh eligibility test to ensure the payments go to those in genuine need.

Prime Minister Scott Morrison and Treasurer Josh Frydenberg will reveal the new rates on Tuesday to replace the JobKeeper payment of $1500 per fortnight and the temporary boost to JobSeeker to $1100 per fortnight.

With the second wave of coronavirus infections sparking fears of a deeper and longer recession, the government revoked its original plan to phase out the emergency payments at the end of September and instead heeded business calls to extend them for about six months.

While the government was tight-lipped about the new JobKeeper rate, it is tipped to be more than $1100 per fortnight for full-time workers.

Guardian Australia has hit its goal of 150,000 financial supporters

Setting this goal was driven by the belief that a plurality of voices in the media landscape – and getting the highest quality independent journalism into the hands of many – is good for democracy and good for public discourse. 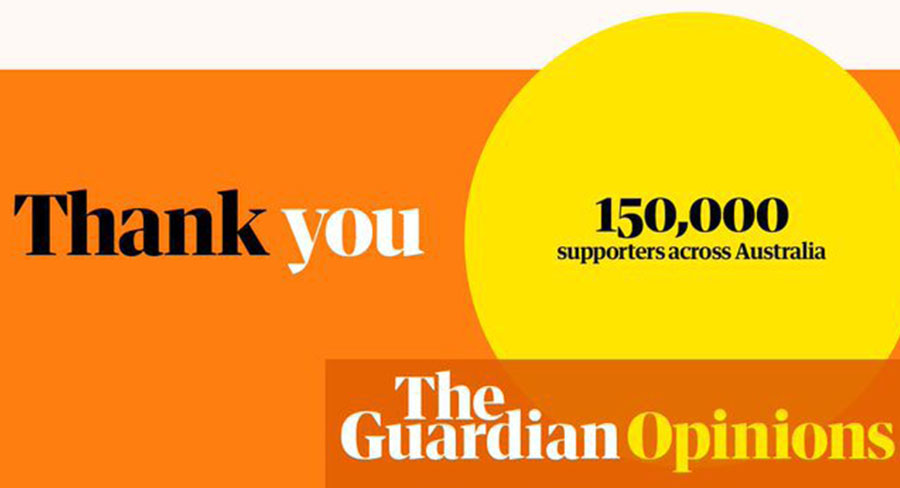 We keep saying this, but the challenges to journalism from many quarters are unrelenting – perpetual job losses, disappearing newsrooms, the undermining of the business model, the loss of regional news coverage, cuts to the public broadcaster. More than ever, public interest journalism needs to be strong and it needs to be supported – and in the case of Guardian Australia, reader support is part of our strength. It safeguards our future.

Now we are embarking on more vital projects – a deep dive into how young Australians will cope with unprecedented unemployment rates, an investigation into how it is that so many Indigenous children are in jail, and how the disruptions of 2020 can give rise to an environmentally friendly recovery. As always, we’ll continue to give voice to the voiceless, and hold power to account.

Your support is not only financial. The messages we receive about why you choose to pay for our journalism when you don’t have to, and why our journalism is important to you, are motivating. My greatest privilege as membership editor is being in this two-way conversation, and knowing you feel part of our community. During this difficult year the newsroom has found inspiration – and great comfort – in your words of encouragement.

New foreign correspondent appointments made by Nine and Seven

Carrie-Anne Greenbank is to be the next European correspondent for Nine News, replacing Sophie Walsh who is returning to Nine Sydney, reports TV Tonight.

She has been with Nine for over a decade, and Nine Melbourne for the past four years, previously with Nine Brisbane, and Gold Coast and WIN News in regional Queensland.

Meanwhile Melbourne based journalist David Woiwod had his last day on Sunrise last Friday before flying to the US to join the Seven News US bureau.

Another nail in print coffin: Q magazine to fold after 34 years

Q, the magazine that was once a cornerstone of the British music press, is to cease publication. The next issue, published on 28 July, will be its last, reports The Guardian.

The editor, Ted Kessler, said in a tweet: “The pandemic did for us and there was nothing more to it than that.” In an editor’s letter in the final issue he wrote: “We’ve been a lean operation for all of my tenure, employing a variety of ways to help keep our head above water in an extremely challenging print market. Covid-19 wiped all that out. I must apologise profusely for my failure to keep Q afloat.”

In May, its owner Bauer Media had put the title under review along with a number of others in its portfolio, as sales and advertising revenues diminished during the coronavirus pandemic. “The pandemic and lockdown has further accelerated the trends already affecting the publishing industry,” Chris Duncan, the chief executive of UK publishing, said when announcing the plans. Its circulation had dwindled to 28,359, with less than half of that coming from newsstand sales, compared with a peak of more than 200,000 in 2001.

It was founded in 1986 by (former Smash Hits editors) Mark Ellen and David Hepworth, its original name of Cue – referencing the cueing up of the next record – was tweaked to prevent confusion from snooker fans and to stand out on newsstands. It was one of the key documents of the 1990s Britpop scene, and was known for its canonical lists of great albums and songs.

In the Australian film and television production industry, locally owned small businesses compete with huge multinationals: studios and networks such as Disney, NBC Universal, Warner Brothers, German giant RTL, Britain’s ITV and even the BBC. We are all competing for the same eyeballs on screen and the same crews to make the shows, writes CJZ co-founder Nick Murray in Nine newspapers.

On Friday, the Morrison government announced a $400 million package to assist the attraction of foreign blockbuster productions to Australia – productions exclusively made by the foreign multinationals.

The Morrison government is to be congratulated for its support of the film and television industry. Despite the perception, over the past three decades Liberal governments have always been more supportive of our industry than Labor governments. But here’s the rub: unlike every other industry, the government is subsidising foreign producers while local productions receive far less, indeed in most cases, no government support.

It’s a tough business to be in, but screen production is an industry where machines cannot replace actual people doing jobs. Our local industry has always punched above its weight, but we are reeling from COVID-19. Right now there is a government inquiry under way to decide on a balanced system of support mechanisms for the entire industry.

Upset viewers of The Voice accused the TV singing contest of being “rigged”, after contestant Chris Sebastian – the brother of Guy Sebastian, one of the show’s judges – won its finale on Sunday night, reports The Sydney Morning Herald’s Robert Moran.

The viewer-voted episode saw Sebastian win over fellow finalists Siala Robson, Johnny Manuel and Stellar Perry in a decision the show had described as “one of the closest Voice title races in history”.

“Controversy is just part of being on television. I knew it was going to be a thing on this show, but I don’t care,” he said.

“It’s a voted show, it’s audited, it couldn’t be more above board. More people voted for me than are slamming me, so I’m going to focus on those people.”

A Channel Nine spokesperson said: “The public vote for The Voice winner is highly regulated, operated by an independent third party, and overseen by lawyers. This year’s result is the tightest ever, with less than half a percent of the votes separating the winner and runner-up.”

T20 World Cup in Australia postponed due to COVID-19

The International Cricket Council (ICC) today confirmed the ICC Men’s T20 World Cup in Australia 2020 has been postponed due to the ongoing COVID-19 pandemic.

The IBC Board agreed to continue to monitor the rapidly changing situation and assess all the information available in order to make a considered decision on future hosts to ensure the sport is able to stage safe and successful global events in 2021 and 2022.

The IBC Board will also continue to evaluate the situation in relation to being able to stage the ICC Women’s Cricket World Cup 2021 in New Zealand in February next year. In the meantime, planning for this event continues as scheduled.

ICC chief executive Manu Sawhney said: “We have undertaken a comprehensive and complex contingency planning exercise and through this process, our number one priority has been to protect the health and safety of everyone involved in the sport.

“The decision to postpone the ICC Men’s T20 World Cup was taken after careful consideration of all of the options available to us and gives us the best possible opportunity of delivering two safe and successful T20 World Cups for fans around the world.

“Our members now have the clarity they need around event windows to enable them to reschedule lost bilateral and domestic cricket. Moving the Men’s Cricket World Cup to a later window is a critical element of this and gives us a better chance of maintaining the integrity of the qualification process. This additional time will be used to reschedule games that might be lost because of the pandemic ensuring qualification can be decided on the field of play.

“Throughout this process we have worked closely with our key stakeholders including governments, members, broadcasters, partners and medical experts to enable us to reach a collective decision for the good of the game and our fans. I would like to thank everyone involved for their commitment to a safe return to cricket.”