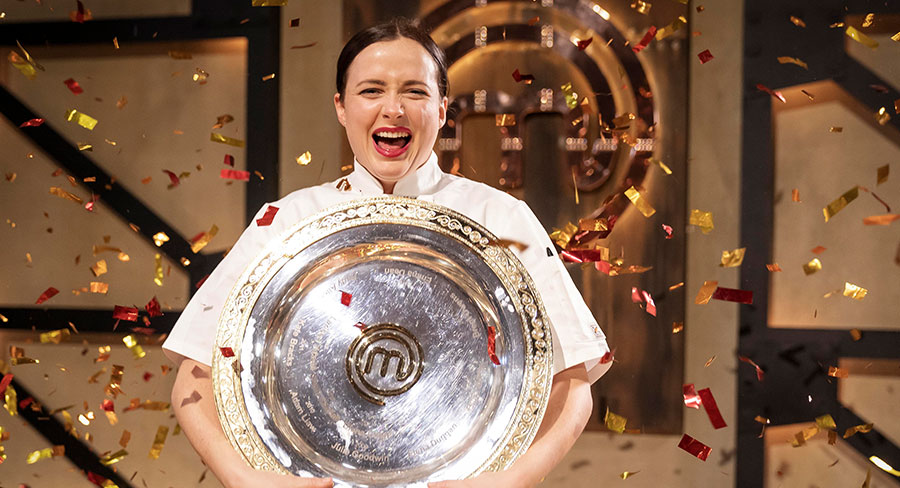 Emelia left the competition holding the MasterChef Australia trophy and a cash prize of $250,000

The MasterChef Australia Back To Win has named a winner with Emelia Jackson coming out of the finale as the champion, on the second half of the MasterChef Grand Finale on 10.

After months of challenges, it came down to Laura and Emelia (who both competed in season six and are close friends) in the Finale. They were both welcomed to the kitchen by former contestants and the judges as they prepared for their final challenge.

To win the trophy and $250,000 they had four hours to prepare a three-course meal of entrée, main and dessert for the judges and former contestants; over 60 plates of food.

Cake maker Emelia was daunted by Laura’s service experience running a restaurant and decided to go down the classic route with her French- inspired and technique-driven menu.

Her menu began with a light entrée of scallops, turnip and apple, a heavier main with beef short rib, crumbed and fried, plus onion with a Szechuan pepper sauce. For dessert, a pistachio financier, pistachio mousse, Davidson Plum and raspberry sorbet and meringue.

Laura’s menu had a native Australian ingredient theme. Her entrée was seared bonito with lilly pilly and fried saltbush, main was pork loin with muntries and three sauces, and she planned to finish with an adventurous dessert featuring Jerusalem artichoke and cumquat.

With three hours to go, Emelia discovered her beef short ribs weren’t cooked, which threw her plans completely out the window. She needed the stock inside the pressure cookers for the pepper sauce and the beef itself. After setting them to cook for an additional 20 minutes, they still weren’t cooked and Andy suggested she might need to consider a plan B of a quicker cooking primary cut of meat. When she finally released the pressure cookers, her risk had paid off, but she found herself racing against the clock to crumb and fry her beef to make it on time for service.

Laura with so much on the go at once juggled to take a pan of Jerusalem artichoke caramel off the stove, which had its handle over the pork rendering and accidentally grabbed it with her bare hand. The burn was instant and excruciating. She called for the nurse but managed to get the pork off the heat before having her hand treated. She had to carry on largely one-handed.

Pushing through the pain, Laura made it to service and plated up a beautiful entrée. The judges were impressed with the sophistication of the seared bonito with smoked fish emulsion eats with perfectly balanced native ingredients she had cleverly used as seasoning, including the lilly pillies, saltbush and Geraldton wax oil.

Emelia’s entrée also had a flawless tasting, it was bright, acidic and elegant, having used the lathe to create ribbons of pickled turnip and fresh apple and perfectly searing the scallops on one side. Pressing on with her main, she had to compromise by cooling the beef down in a blast chiller rather than in the pressure cooker and worried it was too dry. She raced through the crumbing and frying but the tasting went well. The beef was perfectly moist, and the stand-out was the complex pepper sauce.

Laura was worried her burnt hand had distracted her from the pork and she may have overcooked it, but the internal temperature was perfect and the pork was blushing pink when sliced. The triple sauce combination of thyme, masala and sage was challenging for the palette but in a good way.

Emelia took the French tradition of a financier to the next level, surrounding it with pistachio mousse and a white chocolate pistachio coating. The memory of coming third in season six after her dessert was out of balance is inescapable and she worried that it could happen again because the pistachio components were very rich and needed the sour Davidson plum and raspberry to balance it out.

Laura took a huge risk with her unusual savoury dessert by using Jerusalem artichoke in her gelato, caramel and crispy skin and pairing it with cumquat gel. When an unexpected beeping came from her freezer she realised the door had been open, but couldn’t be sure for how long. She hoped the gelato hadn’t been compromised and pushed through with the final touch for her adventurous dessert, adding a chocolate crunch with wattleseed.

Having reached their verdict the judges commended Laura and Emelia on having cooked a three-course meal worthy of the Grand Finale, with nothing splitting their entrée and main dishes.

Melissa said that before the desserts arrived there was nothing in it, so this course was the one that ultimately decided the winner.

Laura was praised for her combination of Jerusalem artichoke and cumquat that was strange to behold at first, but delicious to eat with delicately balanced flavours that Laura is known for. Though Emelia’s classic flavours of pistachio and raspberry were much more familiar, they were equally as delicious and well balanced.

Acknowledging that it was always going to be the smallest of things that would decide the winner, Melissa delivered the final verdict: “Laura, your gelato and crumb had some textural issues; Emelia, your dish had none and that’s why Emelia you are the winner of MasterChef Back To Win.”