The Morrison government will pursue a new set of media regulatory settings that seek to put companies in the sector on an equal footing regardless of which technology audiences use to consume content, reports The AFR’s Max Mason.

The government is expected to undertake a broad review of Australia’s media regulations and implement changes in stages. It is one of the Australian Competition and Consumer Commission’s recommendations in its Digital Platforms Inquiry.

“That extends across a whole range of areas because of the way that technology has transformed and in turn led to different businesses competing over different technologies, but essentially competing in the same market,” Communications Minister Paul Fletcher said on the set of Stan’s new $25 million original production The Commons.

The changes could see subscription video on-demand services such as Netflix, Stan, Amazon and Disney+ face local content obligations. However, what form that may take is unclear, given the obligations on free-to-air television, such as 55 per cent Australian content, are likely to be unworkable in the streaming world.

Nine will hit the threshold it needs to take over Macquarie Media, with venture capitalist Mark Carnegie set to agree to sell his stake in the radio broadcaster, reports The AFR’s Max Mason.

Sources told The Australian Financial Review that Carnegie will accept Nine’s $1.46 per share offer as early as Friday for his 3.6 per cent stake in Macquarie. He will pocket about $9 million from the transaction.

This will take Nine’s stake in Macquarie, home of 2GB and 3AW, to 92.4 per cent – over the 90 per cent threshold it needs to compulsorily sweep up the remaining shares in the company.

Mediaweek is more interested in the Cultural top 10. Ranking at number three is the winner of the 2019 TV Week Gold Logie – Tom Gleeson. 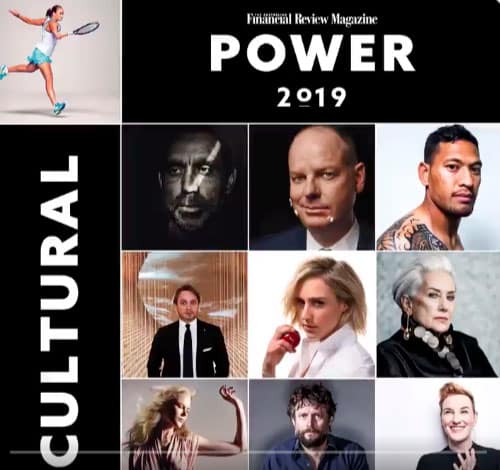 Tom Gleeson had been hell-bent on pointing out that Australian TV’s emperors and empresses were scantily clad, if not downright nude, as part of his 2019 Logie campaign, whether they found it funny or not. He’d successfully campaigned for 10’s Grant Denyer to win the Gold Logie for Most Popular Personality on Australian Television at last year’s 60th-anniversary event, even though – or rather because – Denyer didn’t have a program at the time. This year, he went one better, launching his own #Gleeson4Gold bid, complete with attack ads and axing Hard Quiz (“chucking a Denyer”) to fuel the campaign.

In his acceptance speech, wine glass in hand, Gleeson said his victory was a win for “taking the piss” and “not giving a shit”, before telling his industry audience to “lighten the f— up”, something many in the room were visibly having difficulty doing. As Gleeson said: “There has been a lot of concern that I’m turning this award into a joke. But what you are forgetting is I’m a comedian – I love jokes.” In a sense, he could be seen as the alternative, antic face of this year’s Power cover boy, Prime Minister Scott Morrison. And as fulfilling the jester’s essential function: exposing the folly and pretension of any court, be it Australian politics or Australian TV. “Do I have any regrets?” Gleeson asked rhetorically on the night. “No, I got a result. I’m like ScoMo on election night – this is a victory for the quiet Australians.” The PM had indeed been his inspiration, he said later. “I stayed on message and did as much media as I could, and I had heaps of self-belief.”

Read more about The 10 most culturally powerful Australians in 2019 here.

The national fellowships – now in their second year – enable social justice journalism in memory of Michael Gordon (pictured), the respected former political editor of The Age newspaper who died suddenly in February 2018.

The 2019 Michael Gordon Fellows are:

The fellowships are supported by the Copyright Agency’s Cultural Fund, the ABC, Nine, the National Press Club, Grant Rule and Sophie Oh and the Ray & Margaret Wilson Foundation.

“We are delighted to again support some outstanding projects that will deliver the kind of journalism Michael Gordon exemplified in his career,” Baker said.

Political cartoonist David Rowe was sitting up late at night in the aftermath of Donald Trump‘s unexpected victory in the 2016 US election, reports ABC News Breakfast.

The award-winning satirist for The Australian Financial Review was no stranger to the fickle nature of politics, but this was clearly a bigger moment than most.

“It just came to me. I thought I have got to comment on this, it was pretty historic,” he said this week.

What followed was a cartoon of a sly-eyed President-elect lying in bed next to a Statue of Liberty who appears to be waking to an awful realisation.

As Rowe notes: “The eyes just got it.”

The cartoon went viral, amassing thousands of likes and shares on social media, including from celebrities like pop star Rihanna.

But not everyone was a fan.

“I got a lot of flak from America, a lot of hate mail and stuff like that. There’s a lot of [Donald Trump] fans out there,” he said.

He has just released a book, Politics Now, which is a collection of 200 of his cartoons over the past five years.

There are a couple of things you won’t often see in Rowe’s cartoons – he generally avoids notable deaths (“you don’t want to be like a vulture”) and his early editors didn’t like toilets in the images (“that crossed a boundary for the Fin at that time”).

Whoever had the idea for the new Herald Sun podcast series Face Off gets to see the initiative splashed all over the front page of Australia’s biggest-selling daily newspaper today.

It’s a brilliant idea for a podcast and its first iteration will surely attract a big audience.

Liberal and Labor giants Jeff Kennett and Steve Bracks have been brought together for the 20th anniversary of the election battle which ended Kennett’s run as Victorian premier, and the pair has warned some dangers loom for Australia.

As they admired the city they helped build while ruling Victoria for a combined total of 15 years, Jeff Kennett couldn’t resist a gentle ribbing of his former political adversary, Steve Bracks.

“Didn’t I build it? You just came in and took the bloody surplus,” he said with a grin.

The two giants of the Liberal and Labor parties were reunited for their first joint interview to discuss the boilover 1999 state election that ended Kennett’s seven-year reign.

The interview forms part of a new Herald Sun podcast series Face Off in which one-time fierce rivals discuss key battles that have shaped Australia’s history, politics and sport.

Alan Jones urges boycott of Australia’s second-biggest advertiser
2GB host: “I am growing tired of some of these corporate hypocrites”

2GB breakfast host Alan Jones has attacked Coles over its decision to pull advertising spend from his show, urging listeners to give the supermarket giant “a wide berth”, reports The Australian’s Zoe Samios.

On Thursday morning, Jones took aim at the supermarket chain, which pulled advertising following controversial comments made about New Zealand Prime Minister Jacinda Ardern in August, urging it to get its own “value system” in order before passing judgment.

“I have been patient for a long time. But I am growing tired of some of these corporate hypocrites,” Jones told listeners on 2GB and 4BC.

Jones criticised for Coles ripping off dairy farmers, before declaring that if the company was going to take action against him, then he would “enter the ring” and reciprocate.

She was a mainstay of 1990s commercial radio. And this weekend Dr Sally Cockburn will return to the national airwaves as her on-air persona Dr Feelgood to reignite frank conversations about sex and relationships.

Macquarie Media is giving the 3AW broadcaster a new, four-hour show that will be syndicated across Sydney’s 2GB and Brisbane’s 4BC on Saturday evenings. Dr Cockburn, whose popular program Pillowtalk aired on Austereo between 1992 and 1998, says she hopes her rebooted program will continue to break-down taboos solve problems across the country – big or small.

She recalls one listener phoning in sometime in the 90s to say he’d gotten his penis stuck in his zipper, to which she advised him to put some ice on it or in lieu of that a cold beer, and wait for his girlfriend to come over to help him. Then there was the time a caller asked for advice on how to come out to his family.

“Dr Feelgood’s certainly making a comeback,” Dr Cockburn says. “It will definitely be grown-up and rebooted. I want to talk about relationship dilemmas, relationship issues. And I’m looking for the audience to drive what they want to hear. What I want to do is create a community. But it’s not going to be like a school lesson – it’s a Saturday night!”

Erin Molan has broken down in tears while she was doing a live radio performance amid reports of an alleged “feud” with NRL legend Andrew ‘Joey’ Johns.

Molan, who was wearing dark sunglasses, wiped her eyes as she told WSFM’s Jonesy and Amanda she was having a “rough” time in the run-up to this weekend’s NRL Grand Final.

“I am so sorry, I haven’t put my contacts in this morning. I had a rough night. I didn’t sleep very well and these are prescriptions,” Molan said, explaining her eyewear.

“I think it’s because you are so professional, you are so good at your job and I think men don’t like you being good in what they still see as their world,” Keller said.

“I admire the pants off you … I just think you are the most professional female and it’s threatened everybody.”

Breakfast shows on the road: Jones in Japan, Ross & John in hospital

As Tokyo gears up to host the 2020 Olympic Games, Alan Jones is confident they will deliver one of the greatest Olympics in history, reports 2GB.

Jones has taken his show to Tokyo this week for the Rugby World Cup and is loving the Japanese way of life.

He says there’s “no city in the world more suitable to host an Olympic Games”.

Jones spoke with the Project Director of International Communication for Tokyo 2020 Olympics, Tatsuo Ogura, to get an insight into how the preparations are going.

The Games will, of course, feature Japan’s famous love of technology, including facial recognition.

“We will use a facial recognition system for the venues to identify those people who have accreditation,” says Ogura.

“It’s going to make for smoother access to the venues for those athletes, team members and staff members.”

Meanwhile 3AW breakfast hosts Ross and John this morning are broadcasting from Melbourne’s Cabrini Hospital. The stations is taking part in the opening celebrations for the new Gandel Wing.

Ross Stevenson revealed this morning that exactly 21 years ago today he was at the hospital for the birth of his son Noah.

After attending the races tomorrow, he will attend his son’s 21st birthday paty where he will be of the speakers.

Barely 18 months after Matthew Tripp‘s CrownBet acquired William Hill Australia in a deal backed by Canada’s The Stars Group, the goalposts are about to shift again, reports The AFR’s Street Talk.

The Stars Group, which owns 80 per cent of what’s now called BetEasy, has announced a merger with Flutter Entertainment – the company that is the combination of Betfair and Paddy Power.

Both are big players in Australian bookmaking.

The Stars Group’s BetEasy has 8.1 per cent of Australia’s $4.3 billion wagering market, while Flutter’s Sportsbet has 18.1 per cent, according to Credit Suisse equities analysts.