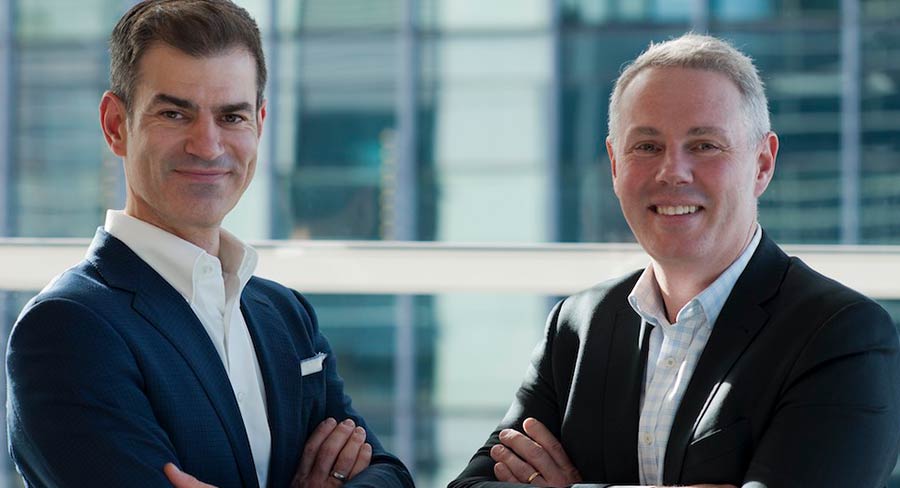 Announcing the deal, KPMG Australia CEO, Gary Wingrove said: “Love Agency has been a pioneering digital business for over 10 years, and we are excited to be welcoming them to KPMG. The addition of Love Agency’s capabilities will provide greater scale for our fast-growing KPMG Digital Delta business and further enhance our market position as a global leader in delivering true enterprise-wide digital transformation.”

Head of management consulting for KPMG, Ian Hancock, explained: “We are increasingly being asked to assist our clients to re-imagine and re-invent themselves. This often means supporting their transformation into world-class digital enterprises using advanced technologies, data and human insights.

“Bringing Love Agency into KPMG Digital Delta means we are better able to deliver end-to-end digital transformation solutions that seamlessly connect our clients’ front, middle and back offices,” he said.

Over the past year, Love Agency has collaborated with KPMG to co-deliver successful client projects, allowing each business to trial what will now be a fulltime relationship.

Danny Housseas said: “Having spent the last decade researching and delivering customer centric products in highly scalable enterprise environments we are delighted to embark on the next phase of our journey. As part of KPMG, we’ll be able to bring together a broader set of digital capabilities, work with some of the smartest minds in the business and at a larger scale than previously possible. This will ensure our clients have the necessary support to achieve their transformation goals.” Parker has been appointed to the newly created role of sales director for independent and boutique agencies. He joins the MiQ team with 14 years of experience in the media industry including senior sales and management roles with News Corp, carsales.com.au and CarAdvice.

Brown joins MiQ as group sales manager. Having worked across the Australian media landscape for the last 10 years, Rhiannon has held sales and management positions at InLink, Bauer, carsales.com.au and MCN. Most recently, she was NSW agency director at Fairfax.

The two new hires will be reporting to Fi Roberts, sales director at MiQ ANZ.

John Danby, managing director of MiQ ANZ, said: “ Since entering the ANZ market just over a year and a half ago, MiQ has experienced incredible growth as we continue to provide strong marketing intelligence-led results for our clients. To keep up with demand and maintain our high-quality service, the next step naturally was to add these two new specialised roles to our sales team.”

Google and UTS calling for overhaul of defamation laws

Google has argued Australia should follow Britain’s lead in providing stronger protections for search engines being sued for defamation for facilitating access to third-party content, reports The Australian’s Nicola Berkovic.

The US tech giant said existing defences were insufficient because they had been interpreted not to apply once a search engine or internet service provider was “on notice” of allegedly defamatory content.

In a submission to a review of the nation’s defamation laws, the company has argued it should only have to block access to search results for content if issued with a court order – otherwise it “leads to the suppression of legitimate speech for fear of liability”.

The University of Technology Sydney’s Centre for Media Transition has also argued in favour of sweeping reforms to defamation laws to better protect public-interest journalism.

It said there was a “well-established failure” of the laws to “provide an appropriate defence for journalism” – which meant this was a “priority for reform”.

Cineflix Media and Scott Brothers Entertainment are to continue their partnership following an IP deal.

The agreement gives distributor Cineflix Rights the worldwide distribution rights, excluding the US and English-language in Canada, to Drew and Jonathan Scott’s newest title – Property Brothers: Forever Home, rolling out with an initial 40, hour-long episodes.

Scott Brothers Entertainment will be taking on the producing rights for all future Property Brothers projects, while Cineflix will have an ongoing financial and distribution participation in future productions under the franchise banner, and a share in ancillary revenue from the Property Brothers brand. “We are looking forward to launching Property Brothers: Forever Home to the global market. With existing sales of more than 300 hours of programming in the franchise spanning more than 160 countries, Cineflix Rights will continue to bring the Property Brothers to buyers around the world,” said Chris Bonney, CEO rights, Cineflix Media.

“Since 2011, when Property Brothers first premiered, we have been so proud of our partnership with Cineflix,” said Drew Scott, co-founder and executive producer, Scott Brothers Entertainment.

“We are grateful for our ongoing partnership and we look forward to sharing many more seasons of Property Brothers with our dedicated fans around the world,” added Jonathan Scott, co-founder and executive producer, Scott Brothers Entertainment.

“We’re delighted to continue our partnership with Drew and Jonathan,” said Glen Salzman, co-founder and co-CEO, Cineflix Media. “We started building Property Brothers together in 2011 and, thanks to Drew and Jonathan and our great team at Cineflix Productions, the brand has become one of the most-watched lifestyle shows on TV today.”

How Four Corners secured unprecedented access to a police watch

ABC journalist Mark Willacy has given an insight into “Inside the Watch House”, his three-month investigation into youth detention in Queensland, which uncovered cases of children as young as 10 being held alongside adult criminals in maximum security facilities.

The episode was screened on ABC last night.

“I got a tip when I was working on my last Four Corners story in February which suggested that kids as young as 10 are being held in watch houses around Queensland and there’ve been serious incidents that no-one knows about,” he tells ABC News.

“Some Right to Information [also known as Freedom of Information] requests were obtained and there were all these cases, the first batch was 206 cases, of incidents or concerns inside these watch houses raised by the Public Guardian’s office.

“Our own Right to Information request yielded several hundred more documents as well as correspondence, which is really important, between the Public Guardian, the Premier’s department, various other departments, and the police.

“I have some pretty good police contacts I’ve developed over many years here, so I rang one high up the chain and I said, ‘I know guys don’t want children in these watch houses and I think it would be good if we could go in there and take a look and film the conditions of the watch house and that was approved.”

US Upfronts: TV industry’s $20b week – streaming isn’t king yet

The so-called upfronts are traditional television’s annual hype-fest, and a way locking advertisers into lucrative deals. They’re also a reminder of the medium’s continuing relevance, reports The New York Times.

This week, the television industry will put on its biggest show of the year, the upfront presentations, an annual deal-making ritual that goes back more than five decades. It has become more important than ever.

The upfronts give the major networks a chance to trot out their stars at grand venues in New York to hype their fall line-ups for an audience of deep-pocketed advertisers, but they also serve as a pitch for TV’s continuing relevance.

With Netflix rolling out new shows all year long, the idea of fresh TV programming in the fall may seem quaint. But traditional television is still big business. During last year’s upfronts, ABC, CBS, Fox and NBC secured more than US$9 billion for prime-time ad slots and cable networks grabbed more than $11 billion combined, evidence that the major brands remain bullish on the medium.

That’s because, although the number of traditional TV viewers is shrinking, the networks offer something rare these days: opportunities to reach millions of people in real time.

Thankfully the Australian public, and our local jury agreed, voting it the winner at Eurovision: Australia Decides in February.

But the strategy to take on Europe was only just beginning for the head of the Australian delegation Paul Clarke. Changes were made to the performance by Kate Miller-Heidke that were revealed last week in Tel Aviv that have elevated, pun-intended, our chances at glory.

“As soon as I heard the song I thought ‘This could win Eurovision.’ It’s polarising, and meant to be polarising,” he tells TV Tonight.

“The lyrics lead you to elevation. Australia Decides was about the dark end of her consciousness, and finding the light in her performance, but she felt like she was a bit stuck. I don’t think the bottom end of the dress was successful enough.

“Up until now I was a little bit concerned that Europe hasn’t really responded to Kate’s song. I think it had something to do with our staging for Australia Decides. It looked a little bit too much like Estonia last year for them.”

ITV has suspended filming and broadcasts of The Jeremy Kyle Show after the death of a guest who appeared on the program, amid growing scrutiny of how reality television affects the people who take part, reports The Guardian.

The broadcaster said it would not screen the episode in which the person took part, in addition to immediately removing all past episodes of the programme from its ITV Hub catch-up service and ending repeats on other channels.

The broadcaster did not identify the participant, explain how they had died or give any indication of when the show would be back on air.

The show is filmed at MediaCityUK in Salford. Greater Manchester police said they had no knowledge of any involvement with a death connected to the program.

Australia’s rugby and football administrators were on high alert on Monday night after news pay television broadcaster Foxtel was poised to take a razor to its overburdened sports rights budget, report The Sydney Morning Herald’s Georgina Robinson and Dominic Bossi.

In a statement to the ASX on Monday morning, Foxtel’s controlling shareholder News Corp flagged cuts to the broadcaster’s spending on “non-marquee sporting content” and another price rise for customers after a financial loss of $417 million in 2018.

The market bombshell did not filter through to Rugby Australia and Football Federation Australia until late in the day, but industry insiders were in broad agreement they were the two sports most threatened by any cost-cutting at Fox Sports or its streaming product Kayo.

Rugby has just kicked off negotiations with Fox on the next cycle of Super Rugby and Test-match schedules – a spokesperson described them as “constructive discussions”.

FFA is less vulnerable in the immediate future, being only a third of the way through its six-year A-League deal with the pay broadcaster, but the news is worrying for the domestic game’s long-term future.

A-League ratings have plummeted in recent years, casting some doubt on the wisdom of the $346m six-year deal the broadcaster signed in 2016.

The Final Quarter documentary to be screened to AFL club chiefs

The embargoed and highly sensitive Adam Goodes documentary will be privately shown to all attending AFL club chiefs when they meet in Werribee on Tuesday, reports The Age’s Sam McClure.

The confronting documentary The Final Quarter, set to be released on June 7 at the Sydney Film Festival, is Australian filmmaker Ian Darling’s re-examination of Goodes’ final three years in the AFL.

League boss Gillon McLachlan has seen the documentary, as has the entire AFL Commission and members of the executive team.

Players who attended the Indigenous All-Stars Summit in Adelaide in February have also seen film.

The AFL believes club chiefs should be shown the film as a collective.

Goodes’ departure from the game was uncomfortable, to say the least. There was the incident with a young female Collingwood supporter in 2013, the Eddie McGuire radio gaffe, the booing of Goodes in the 2014 grand final and the naming of him of Australian of the Year.