Final AAP bids land, no takers for the entire business

The long wait for Australian Associated Press journalists is nearing an end with a decision on the newswires’ future expected in coming days, reports The AFR’s Sarah Thompson, Anthony Macdonald and Tim Boyd.

Final offers for the AAP business went in on Wednesday night and it’s believed there’s different bidders for different parts of the business.

A consortium led by former Foxtel and News Corp Australia chief executive Peter Tonagh lobbed a bid for the newswire part of the business, including the fact-checking and photo divisions.

There weren’t any bids for the entire AAP business, making the process of reaching agreement, if one is brokered at all, more difficult.

Advertisers push back 85pc of oOh!media bookings to second half

oOh!media saw around 85 per cent of its April and May bookings for outdoor advertising pushed into the second half of 2020 as COVID-19 lockdowns pushed the ad market off a cliff, reports The AFR’s Max Mason.

oOh!media, which completed an emergency $167 million capital raising to deal with bookings drying up, has been slashing costs to get through the pandemic.

“As you would expect, out-of-home has been impacted more proportionately than other forms of media, given the audience decline as a direct result of the movement restrictions in relation to COVID-19,” chief executive Brendon Cook told oOh!media’s annual general meeting on Thursday.

KordaMentha called in to recheck the pulse of regional media

In her report, Brownlow agreed with the view of regional broadcasting executives, laying out the dire state of the sector and a need for regulatory change to prevent closures in the near-term, which can be defined as the next 12-18 months.

Sources familiar with the report’s findings said Brownlow, who was paid $11,200 for the research, set out a list of recommendations including the removal of media laws, which would allow for mergers and acquisitions in television, print and radio to salvage regional newsrooms.

The Australian Communications and Media Authority (ACMA) has found Channel Seven News Brisbane breached privacy and impartiality rules during two news programs which related to the Queensland Building and Construction Commission (QBCC), broadcast on 30 and 31 July 2019.

An ACMA investigation found there was a breach of the privacy of two QBCC staff members. The news story on 30 July contained images of their names, job titles and signatures which was unnecessary and not in the public interest.

The investigation also found Channel Seven News Brisbane was not fair and impartial in its presentation of allegations on 31July of QBCC’s handling of a customer complaint.

ACMA chair Nerida O’Loughlin said broadcasters need to adhere to the regulations set out in their relevant codes of practice.

“The Commercial Television Code of Practice has clear definitions of what is acceptable to broadcast. Channel Seven News Brisbane failed to meet its obligations under the Code,” O’Loughlin said.

“By failing to give the QBCC the opportunity to respond to the allegations aired in the 31 July news story, it failed to present the news fairly and impartially.”

Channel Seven News Brisbane will circulate a copy of the ACMA’s finding to news editorial staff within Seven Brisbane and include the decision and its reasoning in its staff Code training. Given Seven’s record of code compliance, the ACMA considers those actions are sufficient remedial actions in the circumstances.

“Everyone within the company has pulled together to meet the challenges. Advertising revenue was impacted dramatically but we’re seeing early signs of improvement as restrictions are lifted,” Catalano told The Australian.

Catalano said ACM is currently reviewing all its suspended titles and the current environment to decide when they will resume publishing. He said there was no point in bringing them back if local traders were not open and areas remained in lockdown.

Catalano said there were no plans to follow News Corp Australia’s recent decision to stop publishing the bulk of its regional and local newspapers and make them digital-only.

Michael Rowland, 10 years underneath the radar at News Breakfast

“Touch wood I have not had a ‘viral moment’ which I think it’s an amazing achievement in 10 years of live national TV 15 hours of every week,” Michael Rowland tells TV Tonight.

“I haven’t done or said anything that has got me publicity for all the wrong reasons.”

Today marks 10 years with News Breakfast today, having joined the show in June 2010, yet while the likes of Karl, Kochie, Sam and even Virginia have all had their moments of clickbait coverage, ABC’s affable morning host has managed to avoid them all. The worst he can recall in his decade is walking in front of the camera or doing something else when the cameras switch to him.

“On the other side of the coin, there are plenty of highlights. I’ve had the privilege of covering some really big stories both here and oversea. I guess getting over to States for the last two Presidential elections has been a highlight, particularly the last one in 2016.

“It turned into a 10-hour broadcasting marathon when it became very clear that Hillary Clinton wasn’t according to the polls going to be President Donald Trump was going to win. That was a really long night.”

Rowland had been a US correspondent prior to joining News Breakfast, covering stories such as the Obama election and the global financial crisis. But his career very nearly took a different turn out of school.

“My first job out of school was as a management trainee for Westpac. I did that for a couple of months before I got into a journalism course. I have pondered where I could have gone if I stayed on the Westpac tram!” he recalls.

Faustina ‘Fuzzy’ Agolley has called out her former Video Hits co-host Axle Whitehead for being “a racist”, which he denies, reports News Corp’s Jonathon Moran.

The pair, who appeared together on the music show back in 2006, came to blows after Whitehead posted a picture of a yellow tile with the caption #asianlivesmatter.

Agolley initially called Whitehead out in the comments on the picture, which has since been deleted.

“Axle Whitehead is a racist,” she wrote in a subsequent post on her own social media, sharing the private exchange.

“Posted a yellow tile with the hashtag Asian Lives Matter thinking it’s a joke. he then blocked me when I didn’t take my public post down after I called him in four times. His final post in defence of his ‘joke’ was a screen grab of a false stat from Twitter about white men being killed by US police more than any other race. That’s it. That’s all he had. No mention of stats (if real research was had) but was much research done on Video Hits?”

The AFL is on the brink of securing a two-year extension of its television rights deal with Seven West Media at a reduced price but pay TV operator Foxtel is holding out for an even bigger discount, report Nine publishing’s Zoe Samios and Jake Niall.

Multiple media industry sources who requested anonymity because the negotiations are confidential told The Age that Seven is seeking a cost reduction on its current deal in exchange for a two year extension that would give the AFL more financial certainty in a weakening economy.

Seven was expected to pay about $150 million to the AFL this year under its existing deal.

The AFL is in danger of restarting its season without a TV rights deal in a deepening drama for league boss Gillon McLachlan, reports News Corp’s Michael Warner.

Failure to strike a revised agreement with broadcasters Channel 7 and Foxtel before next Thursday night’s Collingwood-Richmond MCG clash will leave the game’s finances in a precarious position.

“There’s a lot of uncertainty,” an insider told the Herald Sun on Thursday night.

The networks are pushing for a reduction of about $150 million on their 2020 payments because the season has been compromised by the COVID-19 crisis.

Reports on Monday that Seven and Foxtel had withheld payments to the AFL were incorrect.

The league received a full payment last December and again in mid-March, meaning broadcasters have forked out two instalments for a single round of football.

The next payment is due in July. An AFL commission subcommittee, including McLachlan, former News Corp boss Kim Williams, Paul Bassat and Robyn Bishop, is leading the league’s negotiations.

Before the coronavirus, the AFL pocketed an average of $417 million a year in TV rights as part of a six-year, $2.5 billion deal with Seven, Foxtel and Telstra that expires at the end of 2022.

Dennis Cometti has on Thursday night been presented with “centimetre perfect” public acknowledgment as one of the AFL’s greatest callers, with induction into the Australian Football Hall of Fame, reports AFL’s Damian Barrett.

The Western Australian with the smooth voice said he was overwhelmed to be afforded the honour. 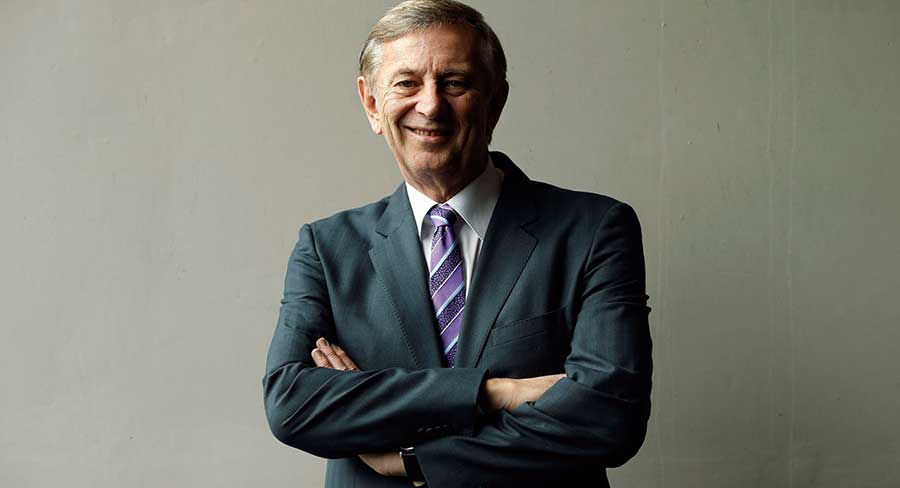 “I didn’t think I was eligible when told of it, but I suppose retirement is a loose term in life and the footy business, and I’m happy to admit I’m still having a lot of fun being involved in a small way with the game,” Cometti said.

Cometti was a more than handy footballer – kicking 63 goals in the 1968 WAFL season for West Perth under the coaching of Polly Farmer – before focusing on a career in broadcast media, initially as a DJ with a liking for a couple of up-and-coming bands, The Rolling Stones and The Beatles.

Cometti was mainly a cricket commentator when at the ABC between 1972 and 1985, but after he joined Channel Seven from 1986 his profile, already sizeable in WA, became a national, and much-loved one.

For the next 35 years, Cometti dominated the airwaves with a unique, accurate, highly entertaining style which has reaped dozens of high-end individual awards and an almost impossible, across-the-board, deep love from the viewing and listening public.

Cometti’s love of radio has never diminished and, while he is now “retired”, he still calls Perth matches for Triple M, where he gets a “great buzz” in working with his son Mark.

Cometti has coined some of football’s most iconic broadcasting phrases, including “centimetre perfect” and “like a cork in the ocean”.

Dennis Cometti inducted into the Australian football Hall of Fame

Dennis Cometti delivered many famous lines that brilliantly captured the moment on the football field and will remain timeless. The popular caller explains how he perfected his craft to News Corp’s Jay Clark.

He’d think of the line, store it away, and then when the opportunity arrived, out it came with that deep, smooth-as-silk voice.

And it was that constant drip-feed of clever and humorous one-liners that has made him one of the most popular callers of the AFL era.

“There is always a tempo in games of football, it’s like a dance,” he said.

“There are gaps, there are breaks, boundary throw-ins and balls-ups, so there are a million places to put something which you think is mildly amusing.

“Not every game is a one-point thriller or a cliffhanger.

The legendary broadcaster has won the AFL Media Association caller of the year 11 times and was last night inducted into the AFL Hall of Fame for his stellar and lifelong contribution to Australian Rules football.

It follows his induction into the Order of Australia last year, as well as the MCG and Sport Australia Hall of Fame.

Nothing you say about Dennis Cometti upon his induction to the Australian Football Hall of Fame could better what the man might say about himself, not that he ever would. To modify a line he once used about Rory Sloane, it would be like trying to outdo Miss Venezuela, reports The Age’s Greg Baum.

If footy is the lyrics and the crowd is the tune, a good caller is the beat. As we already have discovered this year, and soon will be reminded, you need all three. There has been no better caller in this country than Cometti. His voice scores all our own instant footy flashbacks.