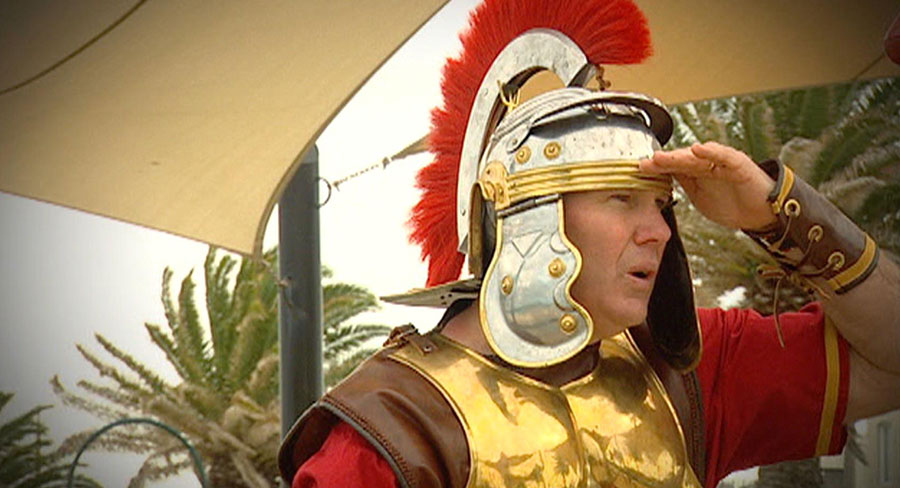 Iflix, the Australian-founded streaming platform watched by 17 million people in 12 south-east Asian countries in May, had its after-tax loss blow out 30 per cent to nearly $US160 million in calendar 2018 as it spent up big on original local content, reports The AFR’s Michael Bailey.

Iflix reported $US28.7 million ($41.9 million) revenue, up from $US21.3 million in calendar 2017, according to accounts lodged with the corporate regulator last week.

However, the company has now racked up accumulated losses of $US378.5 million since it was founded in 2014 by University Of Sydney-educated accountants turned entrepreneurs Patrick Grove and Lucas Elliott, and former Nine digital boss Mark Britt.

The football world is in mourning after St Kilda legend Danny Frawley died in a single-vehicle crash on Monday, reports the Herald Sun.

Frawley, the former Saints champion turned Richmond coach, later went into broadcasting, where he became a favourite among footy fans.

Former teammates, rivals and media colleagues are among those taking to social media to express their grief.

AFL CEO Gillon McLachlan shared his condolences to the Frawley family and colleagues across the whole industry.

“It is a devastating day for the wider football community, and Danny’s loss will be taken very hard by so many people within our industry, as well as within our own organisation,” he said.

Matthew Richardson, the former Richmond champion who played under Frawley during his reign as Tigers coach, said Frawley had an infectious warmth.

“More than anything for me ‘Spud’ was a charismatic character who you wanted to be around,” Richardson said.

“He made you feel good, made you laugh, made you smile, which made it an enjoyable environment in his first few years at Richmond.

As his friend and long-time Triple M colleague Brian Taylor said, Frawley’s family meant everything to him.

“He loved his family and was an absolute gentleman. He also had a wide circle of mates,” Taylor said.

“There were the Triple M crew like Jason Dunstall, Bill Brownless, James Brayshaw and Garry Lyon, but he had kept his friends from his Ballarat days. ‘Spud’ was a straight-shooting knockabout country boy at heart.”

Australian football is mourning one of its fiercest competitors and most vulnerable souls after long-serving St Kilda captain, former Richmond coach and popular media personality Danny Frawley crashed his car into a tree on a quiet country road, reports The Age’s Chip Le Grand.

Frawley died about 1.30pm on Monday, the day after his 56th birthday, when his four-wheel-drive left a single lane road and hit a tree outside the western districts town of Millbrook, east of Ballarat.

Frawley had spoken candidly about his battle with mental health over many years. In recent weeks he confided in friends and family that his marriage was over and personal finances were under severe strain.

He continued to work in the media, hosting Fox Footy’s The Bounce with Jason Dunstall.

Fox Footy programs AFL 360, On The Couch mourn a colleague

AFL 360 hosts Gerard Whateley and Mark Robinson abandoned their regular program last night and paid tribute to their Fox Footy colleague Danny Frawley for much of the program. During the show they crossed to the hosts of On The Couch – Gerard Healy, Jonathan Brown and Paul Roos. Garry Lyon was unable to appear as he dealt with the loss of his good friend. 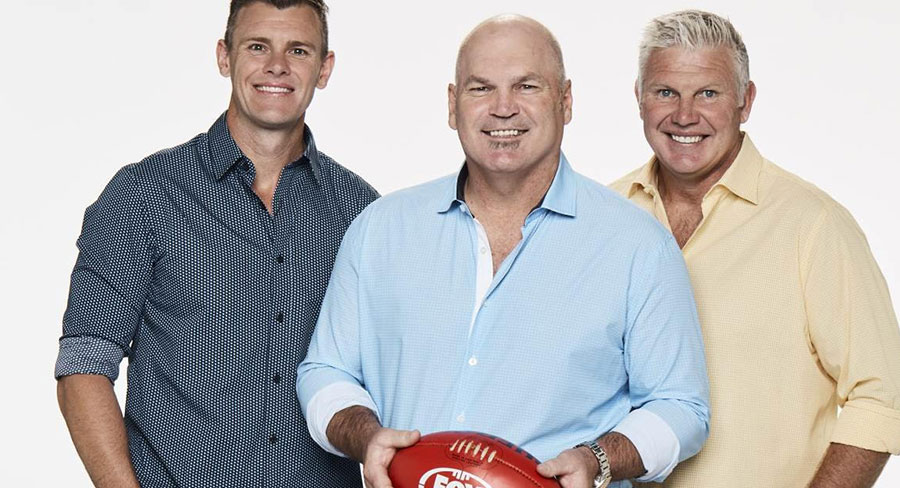 The Fox Sports family, and particularly Fox Footy, today lost one of its own – a leader, a man of incredible passion, insight and love for his family and for his game, AFL.

Our deepest love and wishes go to his wife Anita and their three daughters Chelsea, Danielle, and Keeley and to his many teammates, both in front and behind the camera.

It is a tragic time for all.

Danny gave us so many laughs and magic moments, from his playing days at St Kilda, coaching at Richmond and then his gifted touches at Fox Footy, as recently as Saturday night on his favourite program, Bounce.

Crocmedia on the passing of a great friend – Danny Frawley

We are shocked and saddened to learn of the tragic passing of our great friend Danny ‘Spud’ Frawley.

The much-loved footy legend has been a cherished part of the Crocmedia and 1116 SEN families for many years and this news has rocked us all.

Spud was one of our original Off The Bench TV hosts, a key member of our AFL Nation broadcast team and a regular guest across our station.

His daughter Chelsea Frawley also works with us and our heart-felt sympathy goes out to her, Anita, Danielle and Keeley.

The St Kilda legend and former Richmond coach was a larger-than-life identity in both football, the media and the community more broadly – especially his beloved regional town of Ballarat.

In recent years, Spud revealed his personal battle with mental health issues which inspired many as he bravely shared his fight across many media channels.

“He epitomised the spirit of the St Kilda football club and his football legacy as a player, coach, administrator and media performer is enormous.

“But his sense of community and the way he inspired others will be forever remembered.

“Like the entire football world, and the broader Victorian community, we are stunned and shattered at this extraordinary loss.

“He was simply everyone’s mate.”

Footy Classified host Craig Hutchison led the tributes and was joined by Caroline Wilson and Matthew Lloyd. After the first break regular Chris Judd took his place on the panel.

Seven’s Monday AFL review program Talking Footy started with host Luke Darcy admitting they were not sure whether the program should go to air, so upset were the hosts.

Danny Frawley had been currently employed by Melbourne sports station SEN and was part of their AFL Nation call. The station had been flooded with calls after the news of Frawley’s passing broke on Monday.

Speaking about their relationship with Frawley and what he did for football were Craig Hutchison, Andy Maher, Bob Murphy, Sam McClure and many others in the SEN family.

The station’s breakfast show started on Tuesday morning without Garry Lyon who was replaced on air by Jack Heverin co-hosting with Tim Watson. The program called on listeners to share memories of Frawley.

The show interspersed the calls with memories Heverin and Watson had with their friend and colleague. Hutchy and former Richmond coach Tony Jewell were guests on the show this morning.

Frawley’s former radio home was Triple M and Eddie McGuire and Luke Darcy started their breakfast show paying tribute to Frawley and also taking calls about the AFL great. When Wil Anderson joined the show after 7am, he talked about Frawley the comedian and the station put together several clips of Spud at his best.

AACTA bends the rules to allow Netflix-only film into contention

David Michod’s take on Shakespeare’s so-called “Henriad” – the plays Henry IV: Part 1, Henry IV: Part 2 and Henry V – has been deemed eligible for the Australian Academy of Cinema and Television Arts awards despite not yet screening in Australia, with no plans for a local cinematic release, reports The Age’s Karl Quinn.

The King, written by Animal Kingdom’s Michod and Joel Edgerton, has been scheduled for release on Netflix on October 11.

It made its world premiere at the Venice Film Festival last Monday, where it reportedly received an eight-minute standing ovation.

Under AACTA’s rules, the film would ordinarily not be eligible because it has not screened in Australia on general release or at a qualifying film festival.

“The King has been such a hot play that no Australian film festival can get it,” said AACTA chief Damian Trewhella. “We hadn’t foreseen this circumstance – this one has come in at a level above that.”

When Que Minh Luu pitched a new comedy to her boss at the ABC, she asked a seemingly contradictory question: “Can I make a TV show that you can’t show on TV?”

The answer was yes, writes Clarissa Sebag-Montefiore in The New York Times [also republished in The Age/SMH].

Content, which premiered worldwide on YouTube, Facebook and Instagram this week, is billed by the ABC as the first scripted comedy shot from the perspective of a phone. Viewers are encouraged to watch the show, a vertical video series, on their smartphones.

The comedy, which seems to play out in real time, was mostly shot on an iPhone held by the two actresses. In the first episode, a woman’s livestreaming of her car crash goes viral, a satirical premise that has already proved plausible: A short clip of the car crash’s livestream did go viral on Twitter this week, with many users apparently convinced that it was real footage.

Content is the latest attempt by television producers to reach younger viewers on digital platforms rather than a television screen or laptop.

“We were convinced there was a story to be told about people’s online lives that we hadn’t seen yet,” said Luu, who is an executive producer for the ABC. “Our phones reveal our most intimate secrets.”

Set over seven episodes of seven to 15 minutes long, Content follows a wannabe influencer, 23-year-old Lucy (Charlotte Nicdao) as she tries to gain followers. As she becomes increasingly obsessed with her online image, her relationship with her real-life best friend, Daisy (Gemma Bird Matheson) falters.

But Sunday night’s episode of Channel 9’s The Block – along with its Monday night teaser – was something else entirely.

Host Scott Cam’s confrontation with gay contestants Mitch and Mark is gearing up to be one of the ugliest altercations I’ve ever seen on 21st century television.

Earlier in the series, Sydney-based couple Mitch and Mark, who have been renovating houses together for most of their 14-year relationship, decided to convert the terrace on their top floor into a third living area, or entertaining space. The architect’s plans had originally earmarked it as a master bedroom.

But over time, an uncomfortable pattern has developed whenever host Scott Cam, the judges or even the other contestants spoke about this specific area. This, everyone said over and over, was Mitch and Mark’s “party house” designed “for people like them”. There was a snigger to it. A nudge. A condescension.

When it kept happening, over and over, particularly in the broader context of the way Mitch and Mark were portrayed by the show in several other ways, the implication became clear.

The gay boys from Sydney were making a big, noisy, clichéd gay disco for themselves and other frivolous gays just like them.

Should ABC have renamed Black B*tch to Total Control?

But it’s amazing how even a simple title change can shift perceptions.

Yesterday ABC surprised by revealing the working title was no more. The newly-titled Total Control would screen in October.

That’s despite Black B*tch having its world premiere at the Toronto International Film Festival last week.

An ABC spokesperson said, “Black B*tch was a working title and while we support its deliberate calling out of the racial slur by a proud Indigenous woman, it can also be taken, and used, in a negative way. We want to ensure this excellent show is viewed and talked about by as broad an audience as possible for the great story it tells. To ensure the focus is on the story, not the name, the ABC will broadcast the series with the title Total Control, which aptly describes the central character’s fight for power over her life and politics.”