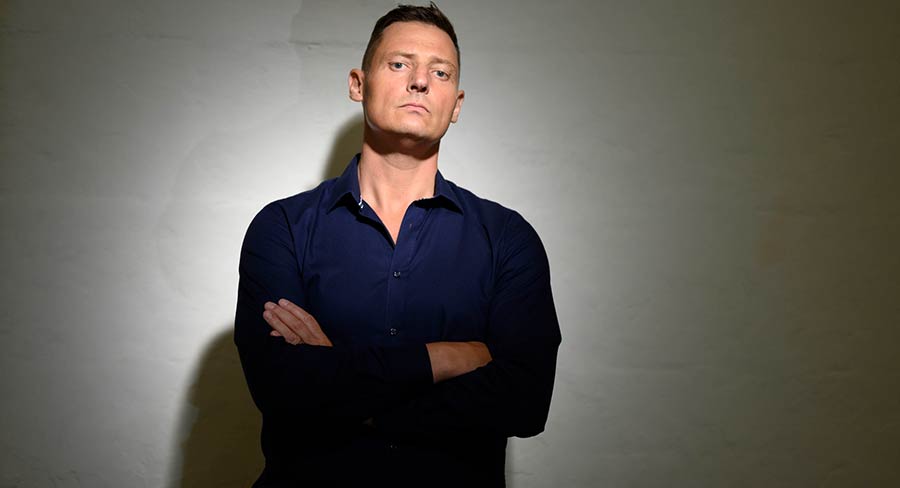 The founding boss of Facebook in Australia believes there is a business argument for the technology platform to be broken up globally but doubts the need for a competition regulator to make the move, reports The Australian’s Leo Shanahan.

Ahead of the release of the Australian Competition & Consumer Commission’s final report on digital platforms and their impact on Australian news media, Stephen Scheeler said the Australian regulator would find it impossible to break up Facebook alone but there could be a good argument to split the company.

“Look at the US and that’s where Facebook has some sort of power to do that, and you broke Facebook into parts – look, if you are an investor, there’s probably more value,” he said.

Scheeler, who led Facebook as managing director from its foundation in Australia, said he did not think sanctioning media organisations or social media platforms was the answer.

Frydenberg puts Facebook and Google on notice over market power

Treasurer Josh Frydenberg has warned Facebook and Google to expect stricter curbs on their market power in the clearest sign yet that the Morrison government is determined to tackle the might of the US tech giants and boost competition in the $8 billion digital advertising market, reports David Crowe.

Frydenberg told The Age and The Sydney Morning Herald that the growing power of the internet meant there were “genuine competition issues” to address in an imminent report on the digital economy to be released by the competition regulator.

The Australian Competition and Consumer Commission handed the final results of its digital platforms inquiry to the government last week. The report examines the impact of Google and Facebook’s market dominance on traditional media companies and consumers and has been closely watched by regulators and tech companies around the world.

Frydenberg was briefed on the findings by ACCC chairman Rod Sims last Thursday ahead of the release of the formal recommendations and a public debate over the huge changes in the online economy.

Executives from Amazon have been in Australia meeting with local content providers and broadcasters to scope out what content may be available for its channels streaming business, but the US e-commerce giant faces challenges in building the service locally, reports The AFR’s Max Mason.

In June, three Seattle-based Amazon content executives came to Australia and took meetings with a range of local media executives in broadcasting as well as content, such as NBCUniversal, BBC and Discovery, with a view to see who could be signed on for a potential launch of Amazon Channels.

Amazon Channels essentially acts as a hub for third-party channels and streaming services, much like Foxtel or Fetch, without hardware such as a box. It is an additional product on top of subscription video on-demand service Amazon Prime Video, which is a standalone service with its own content, both original and licensed.

Foxtel is currently in negotiations with many of its channel providers, such as BBC, Discovery and NBCU. Despite the pay TV giant pushing for more rights but for less money, it still remains a major and long-time contributor to those businesses earnings in Australia.

The NSW Supreme Court has flagged a major legal showdown with US tech giant Google, directing that a contempt charge be issue­d against the media behemoth after it ignored a court order on Friday to take down a series of damning Google reviews against a Sydney businessman, reports The Australian’s Deborah Cornwall.

The high-profile businessman, whose name has been suppressed, launched legal proceedings on Thursday against the California-based company after it failed to respond to his repeated requests to take down a series of “seriously defamatory” attacks against him on Google reviews.

In a statement from Google yesterday, a spokesperson insisted that the company had taken the court orders “seriously” and had responded “in a timely manner”.

Defamation and media law expert Michael Douglas said that charging Google with contempt signalled the growing frustration of Australian courts with global media companies such as Google, Facebook and YouTube which continued­ to argue that they were not bound by Australia’s defam­ation laws.

The ABC has complained to the Morrison government about a plan to give $17 million to commercial television networks to bring Australian shows to the Pacific Islands, with the public broadcaster arguing it should receive the funding instead, report Nine publishing’s Jennifer Duke and Broede Carmody.

Prime Minister Scott Morrison announced the three year, multi-million dollar funding initiative with FreeTV Australia in January and negotiations between the government and the commercial television group are underway.

The program, called ‘Amplifying Australia’s Voice’, aims to bring 1000 hours a year of television content until 2020 to broadcasters in the South Pacific to “promote Australia and our values and help balance an increasing regional media presence of other nations in our region”.

The television shows that will be included have not been decided yet, sources said.

Merrick Watts, half of one of FM radio’s most dynamic 1990s duos, is tipped to replace Steve Price at nights on 2GB, reports News Corp’s Annette Sharp.

2GB CEO Adam Lang confirmed on Saturday he had been in talks with Watts for “six to eight months” about finding a permanent spot for him on 2GB.

“We love Merrick and we’re delighted to have him on next week,” Lang, who first worked with Watts while in management at Triple M, said.

“I started talking to him six to eight months ago and started booking him to do shows then – initially in guest roles on both Ben Fordham and Ray Hadley’s shows, then as a stand-in for Ben when he went on leave. Merrick is great talent and a delight to work with.”

Price, who has hosted the network’s night show for seven years, will now lead the afternoon show on Sydney’s 2GB and Brisbane’s 4BC as part of a reshuffle of the timeslot in a bid to attract a younger and more diverse audience.

The Steve Price Show will be on air from noon to 3pm on weekdays and Price will be joined by News Corp columnist and Sky News host Rita Panahi who has been a regular on his nightly show.

Price established himself at Macquarie Melbourne station, 3AW, but will not be broadcast in the Victorian capital.

The boss of Sydney’s 2GB and Melbourne’s 3AW radio stations Adam Lang has threatened media giant News Corp with legal action after a newspaper article described him as a “smiling assassin” and suggested his job was under pressure, reports The Sydney Morning Herald’s Jennifer Duke.

A front page article in News Corp’s Sydney masthead The Daily Telegraph on Thursday claimed the Macquarie Media chief executive no longer had a working relationship with the station’s star host Alan Jones.

In an open letter to about 600 staff members on Friday, Lang slammed the story as “a farcical construction of false claims, inaccuracies and unverified assertions that slander me and this company in such a way that I cannot let it pass without comment”.

“Legal action is also under way,” he said.

Exactly 165 years ago – on July 5, 1854 – Hobart is Australia’s third largest town, the editor of News Corp’s The Mercury, Chris Jones, told his readers at the end of last week.

It has been just half a century since Europeans settled on the beautiful lands of the Muwinina people, and already 23,000 have made their home here – and constructed 4000 buildings, two-thirds of which are permanent structures of stone or brick.

This 19th century Hobart Town is a place that will soon be described by visiting American author Mark Twain as “the neatest town that the sun shines on”. 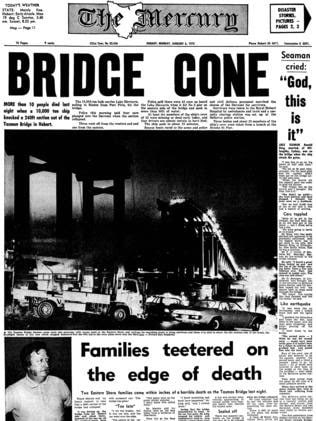 “In Hobart all the aspects are tidy and all a comfort to the eye,” Twain will write during his tour of Australia in 1895.

“It sits on low hills that slope to the harbour … while back of the town rise highlands that are clothed in woodland loveliness, and over the way is that noble mountain, Wellington, a stately bulk, a most majestic pile.

“How beautiful is the whole region, for form, and grouping, and opulence, and freshness of foliage, and variety of colour, and grace and shapeliness of the hills, the capes, the promontories; and then, the splendour of the sunlight, the dim rich distances, the charm of the water glimpses!” 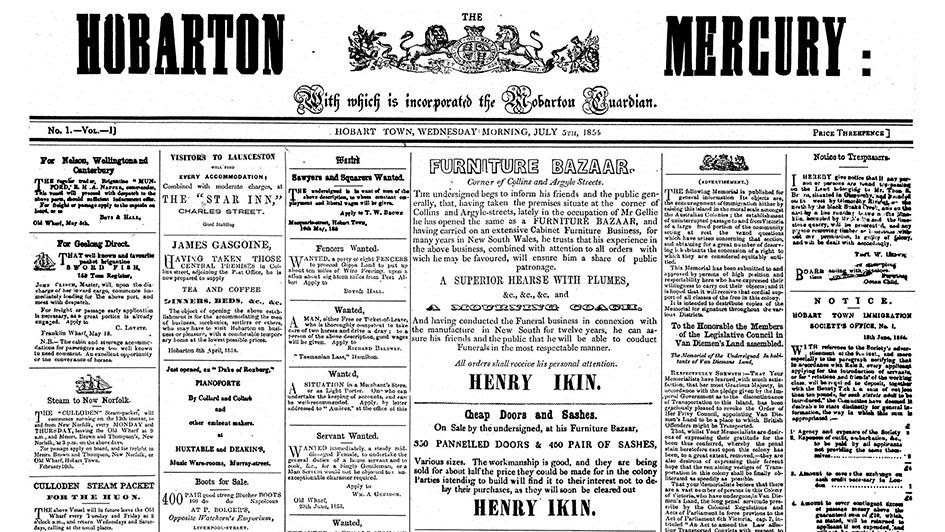 This, then, was a Hobart that would be familiar to any of us today.

This is also a town served by 10 local newspapers — a publication-to-population ratio that would be equivalent to 100 today.

And yet on this crisp mid-winter morning, Wednesday, July 5, 1854, another one is added to that selection: the Hobarton Mercury.

Its founder was John Davies, a former journalist and convict turned NSW police officer who saw a need in Hobart for an independent publication – one not tied like most of the others to political parties or certain partisan causes.

As the newspaper grew – becoming a tri-weekly in 1855 and then a daily from 1857 – Davies saw parallels between the growth of his newspaper and that of Hobart, and what was – after 1856 – Tasmania.

Foster Blake is one of Australia’s most popular and versatile authors having written the novels Air Kisses, Playing the Field, The Younger Man and The Wrong Girl as well as a dating book, Textbook Romance, a beauty book, Amazinger Face, relationships book, Love and Breakup Boss, and the children’s book No One Likes A Fart.

The Wrong Girl was made into a TV series for Channel 10 starring Madeleine West, Jessica Marais, Christie Whelan-Browne and Craig McLachlan.

The Sunrise presenter has entered the Australian Army Reserves and concedes he initially thought he might be too old at the age of 53.

“Even as an older fella, you’ve still got to meet all the basic physical requirements,” Beretta told Confidential.

“You have got to do all of the sit ups and push ups and get the right score on the beat test for running. It was a bit of a challenge but I’ve really enjoyed it.”

Beretta started the recruitment phase mid last year and received the green light that he had been accepted and ranked Captain, working at the Australian Army’s Forces Command in Sydney from earlier this year.

His commitment is to serve a minimum of 20 days a year as a Public Affairs Officer.

“I go in and work at Vic Barracks in Paddington [Sydney], which is convenient,” he said. “The most impressive part is the people. I have just been enthused by them. They are proud of their country and like the whole concept of serving; there is a real family feel to it.”