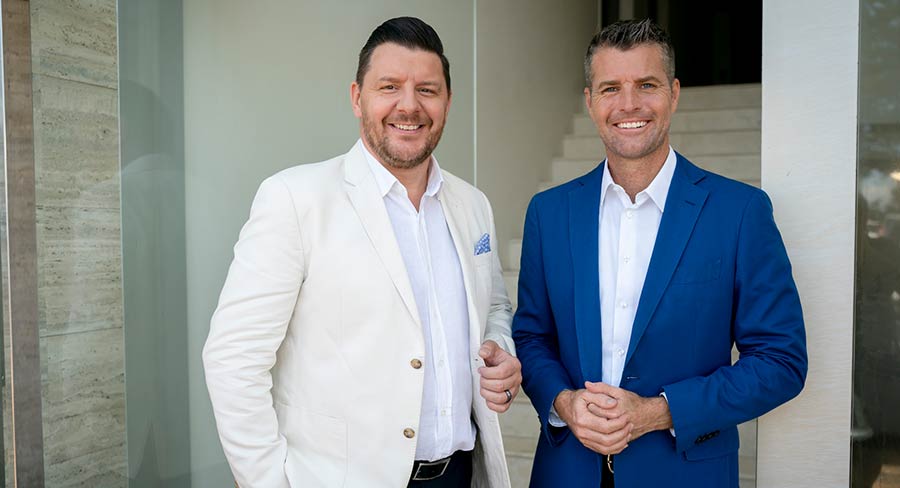 • My Kitchen Rules is the big picture – six months shooting,

Mediaweek has also released separate podcasts with both Pete Evans and Manu Feildel.

You seem to have a great relationship with Seven. Remind us of your work in addition to MKR?

Manu: I have done My France With Manu three times – I have visited two coasts and then done a zigzag from Paris to Champagne down to the Pyrenees. We go away for three weeks at a time and do about 20 stories in three weeks. It is go, go, go with a team of seven in a van. It is not glamorous, but I enjoy it so much.

We then did Around The World With Manu on a trip visiting London, Dubai, Mumbai, Calcutta, Hong Kong, Tokyo, Los Angeles, New York and back to London in six weeks. It was full on as well.

Then we did the southern states of America [Manu’s American Road Trip] from Miami to Texas, which was again three weeks with 3,000km of driving.

This year I was going to California but it has been pushed into next year.

It is great Seven is giving me the opportunity to let me do other things I enjoy.

My Kitchen Rules is the big picture – six months shooting, it is long, it is tiring and after it is over I need to go away and have a good holiday.

I love the other shows – it would be any chef’s dream to travel the world and eat food.

Would you like to do more shows in Europe?

Manu: To be honest with you I have seen more of Europe since I was living in Australia than when I was living in Europe. The things that I love about Europe are the history and the food. What commercial arrangement do you have?

Manu: Obela is a company that makes hummus and other dips. I have been with them for nearly three years and it is a great relationship. There is a lot of hummus on the market. They approached me three years ago, but I said I was not really interested. They persuaded me to come and see them at their office. They had all the dips on a table without the labels for a taste test. I had to taste all of them and tell them which was the best. I pointed to one, and bloody hell, it was Obela. They sold me straight away with that.

I have also been working with Campbell’s for nearly six years. We might be on the way out though as we are not thinking the same any more. That is how it works, you can’t always agree on everything.

I signed up with Hoyts Cinemas last year and created a menu for their Lux experience. It has been difficult to set up in cinemas around the country with different sized kitchens and different types of cooks. We got it working well and have re-signed with them this year.

I have also signed with Home WA and I have endorsed the kitchen in their homes.

I have also become the Australian Egg ambassador. I didn’t even know there was such a thing. There are so many things you can do with eggs.

Seven has also introduced me to Finder.com.au and I have just done some ads for them.

Do you still write cook books?

Manu: I have stopped the books. It is a lot of work and was taking me a long time. It takes over a year to put together. To be honest with you there are enough cookbooks on the market.

What sells now is health and I am not that guy.

Has any other network approached you to change channels?

Manu: Funny that. I wonder if the reason why is that they may not be able to offer me anything else. It would be funny for people who become the face of a channel to jump ship. Seven has looked after me very well and we have a great relationship and no one is offering me any better so I am happy.

Pete: I have two different programs on Netflix. There is a documentary called The Magic Pill, which has gone global and a TV series called The Paleo Way, which is a cooking series.

I am starting a new documentary this week filming in the US and Canada on the cannabis industry and the health implications that are associated with CBD oil and cannabis.

I self fund these productions myself – these are my passion projects. I have always had a passion for film and my dream has been to be a director.

I also have another documentary planned for 2020 and another TV series probably for 2022. I love being in front of the camera, but I also love to create and produce shows.

I have three cookbooks coming out this year. I create the content and hire the photographers and stylists. I do things very uniquely in the publishing world and the television and film world.

I also have a strong belief I will find a home for my work because I think my work is important and they are projects that will change people’s lives.

I get many, many emails and messages about how somebody’s life has been changed by the work we are doing on these other projects.

I love being an employee of Seven’s and it helps me push my creative side into making other content. I love the balance of the two worlds.