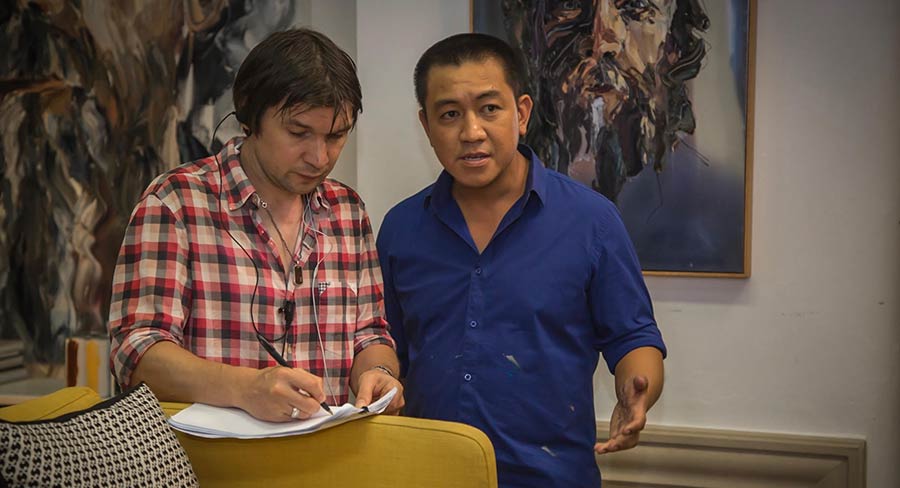 • Comedy, entertainment and factual driven by the talent

One of Australia’s best makers of factual TV has been with Screentime for three years and before that he was with Endemol for about nine years.

Executive producer Johnny Lowry has worked for most of that time under Rory Callaghan who was running the production houses during those years.

“I have actually been with Rory pretty much since I’ve been in Australia,” Lowry told Mediaweek. “Since about 2003.” He had a break for a couple of years when Callaghan was at Endemol Shine.

Lowry’s first show at Screentime is arguably one of his most successful – Anh’s Brush With Fame for ABC.

“When we shot the pilot for that we filmed three guests being painted in three days and two of them ended up being used as episodes.” Those guests on the pilots were breakfast radio stars Amanda Keller and Kyle Sandilands.

The ABC commissioned the show and its been so successful the audience can hardly get enough.

Screentime delivered season four at the end of 2018 with 14 episodes. There has been no official announcement of a commission for season five, yet, but it would be hard to image the broadcaster not wanting to go again.

Lowry explained how Anh’s Brush With Fame has grown since launch:

That’s a pretty big ask for the artist the series revolves around agreed Lowry. “That is a lot of prep for Ahn who looks at photos and researches his subject as he gets ready for the record day. Although there is lots of prep, when we start recording it is actually a quick show to shoot.

“The guests have to give up just a half day – a four hour commitment from start to finish including makeup etc.”

Lowry is very prolific, and multi-talented, which must be an attraction for his employers. “I create, develop, produce and deliver,” he said with a grin. Comedy, entertainment and factual is his beat.

Another show that could be set for a long run is Hughesy, We Have A Problem which is already into series three. “We have done 14 episodes in series three and just came out of studio on Friday.” Season three of Hughesy featured Kate Langbroek before she moved to Italy and her problem involved the decision about whether to go or stay.

10 is moving Hughesy around the schedule a little and as we write this it goes to air after the new Sunday Night Take Away series.

10 has commissioned a short season of one hour episodes which will shoot in April and May. “Kyle Sandilands spends his whole life judging people which is where the idea came from. He has the ability of getting to the core of what is actually happening.”

Screentime has created a large courtroom set at an inner-Sydney studio.

Lowry and his Screentime colleagues have recently had another commission, but he’s unable to share that information just yet.

Lowry has worked with Nazeem Hussain for several years and he was EP on Hussain’s Orange Is The New Brown series for Seven last year.

“I first met Nazeem doing Balls Of Steel. He was cast in that as a character called Calvin Khan Foreign Correspondent and we realised just how talented he was. He was very good with a hidden camera, which is where Legally Brown came from, and it also included sketch comedy.

“Nazeem is a lot of fun on set and one of the best people you will ever work with.”

Hussain’s recent show is one that didn’t really connect with its potential audience as broadcasters strategise how best to distribute their content in an ever-changing TV world.

Lowry is more than happy with the slate of shows he has and there are a numbers of projects he is excited about that could be commissioned very shortly.

Any tips for time management? “It’s all a juggle.”

As to budgets for TV these days: “You do have to work a bit smarter, but it is all about getting the right people. The good thing for the shows I work on is they are largely built around the talent.

“With Hughesy it taps into his comedy. With Kyle it is what he is already doing on the radio. And Anh likes painting and chatting to people. They are all very invested in their projects which makes it a little bit easier for me.”