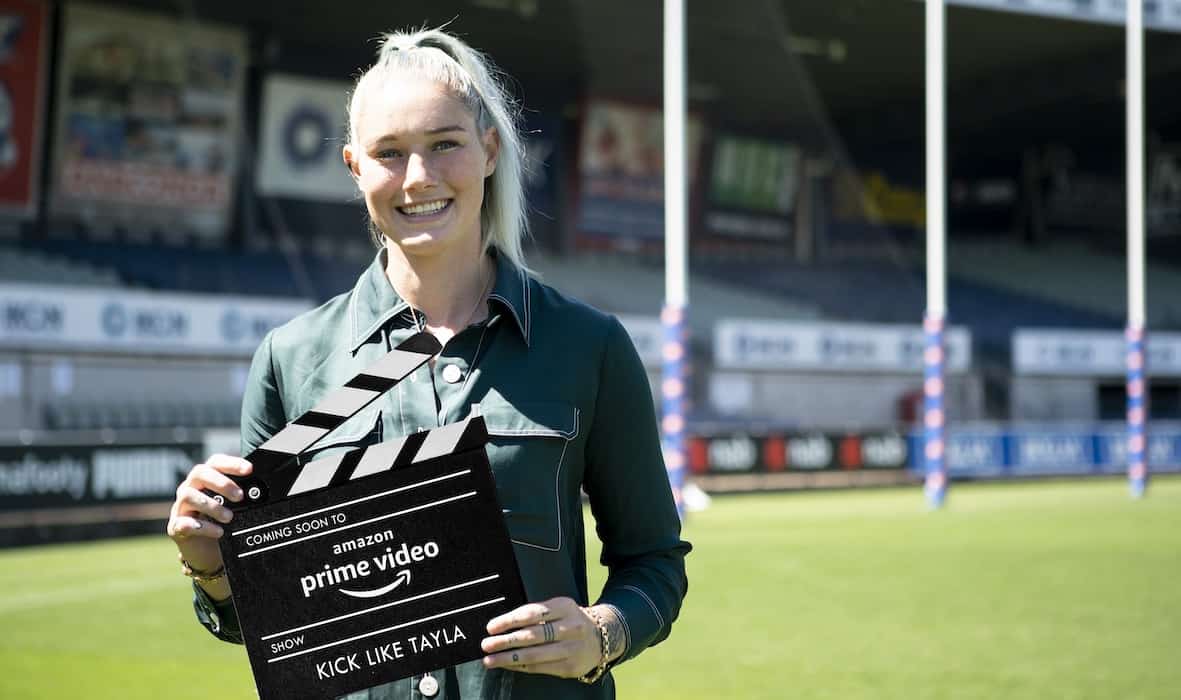 Amazon Prime Video has commenced production with the Australian Football League (AFL) and Screentime, to produce a new Australian Amazon Original documentary that offers unprecedented access to football and boxing star, Tayla Harris. Kick Like Tayla is the second series to be produced by Amazon Prime Video and the AFL, following the upcoming docu-series Making Their Mark, and will launch exclusively in over 240 countries and territories in 2021.

Kick Like Tayla will give Prime members globally an exclusive insight into an incredible athlete, who balances a successful boxing career alongside playing in the NAB AFL Women’s Competition for the Carlton Football Club.

The series will explore what makes Tayla tick, her love of all sports including boxing and football, the impacts of social media, cyber-bullying, and sexism. Kick Like Tayla is the celebration of a once-in-a-generation talent on the rise, and will follow Harris during the 2021 season, on field and behind the scenes, and include interviews with prominent figures both inside and outside the AFLW, as well as national and international fans.

“I’m thrilled to be a part of this new Amazon Prime Video documentary where I can show what is a usually very private side to myself. You will see what makes me tick, how I go about game day, cutting weight for fights and plenty more,” said Harris.

“We are pleased to be adding another Australian Amazon Original sports documentary to our growing lineup for Prime members in Australia and around the world,” said Tyler Bern, head of content, Prime Video Australia. “Sport is so intrinsic to the Australian way of life, and Tayla Harris is one of the world’s most exciting and inspirational athletes of our generation. Tayla’s grit and unflinching determination make her an inspiration to many, and the documentary will provide a unique perspective on what drives her success.”

“Kick Like Tayla is a world-class documentary focused on one of the most-exciting athletes in sport today. Every time the ball goes in her direction you sit up to see what happens next,” added Andrew Garrick, executive producer and director of Kick Like Tayla for Screentime.

“This new documentary will enable audiences to connect with Tayla, who is not only a sporting legend with a long career ahead of her, but who is also an unapologetic pioneer and a fierce fighter for women’s rights. We are delighted to be working alongside Amazon Prime Video and the AFL to share this story of strength in the face of adversity, and delve into the world and mind of this immense talent.”

“We are thrilled to be extending our partnership with Amazon Prime Video and Screentime, which is centred around sharing the unique stories from within the AFL community told by our incredible talent. Kick Like Tayla provides both footy fans and supporters of women in sport with the ability to get up close and personal with one of the most recognisable women in our game,” said AFL general manager of digital, Sarah Wyse.

Kick Like Tayla is currently in production with the Australian Football League and Screentime, and will be directed by Andrew Garrick.