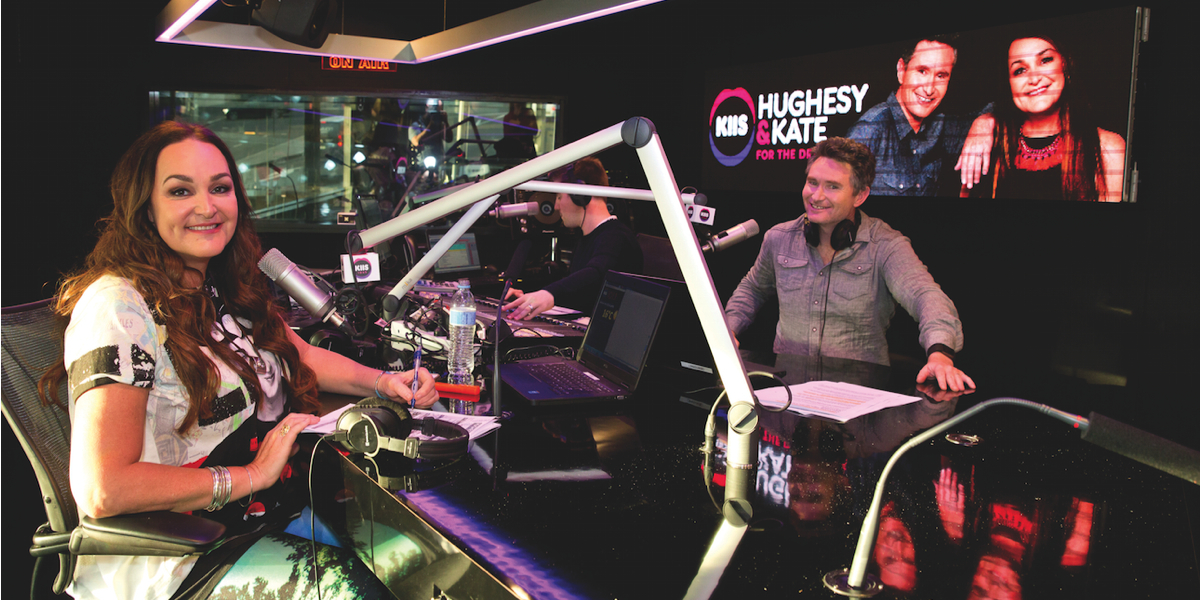 KIIS’ national drive hosts Hughesy and Kate on their success: “We reinvented radio”

ARN’s Hughesy and Kate think they’re onto something. In fact, they’ve thought they’re onto something for a long time now. “If you think back to when we started [in radio], it was very unusual that people would just be having conversations. Now, there’s a lot of conversational radio. But when we did our first show and walked out, people were shocked. It probably wasn’t very good, but it was different. We came from commercial radio, me in particular. I’d never really even heard commercial radio before, so the way that we did things was really quite different,” Kate Langbroek told Mediaweek in a wide-ranging interview that encompassed meditation, parenting and snack preferences.

“What’s she’s saying is that we reinvented radio, and everyone else followed our lead,” Dave “Hughesy” Hughes laughed. “There’s your headline.”

Whether or not the duo were responsible for the wave of conversational radio shows, audiences like them. After 12 years on Nova as the network’s first Melbourne breakfast team, the pair moved to ARN’s KIIS at the start of this year to host a national drive show. Since then, they have picked up the #2 FM Drive spot in the nation’s largest market, Sydney, as well as #1 FM in Melbourne and Adelaide. While the pair noted they were pleased with their performance against stiff competition, including former Nova stablemates Kate, Tim and Marty, they were careful not to put too much stock in the GfK results. “We’re really pleased with the last ratings. Obviously you do put some stock into it, but over time you can’t worry about it because it’s just ridiculous. It’s interesting when you’re all over the nation. You’ll go up in one market and down in another and, to be honest, it makes you realise that these surveys are an inexact science,” Hughes mused.

“You have to hope that your co-host
isn’t predictable, and Katie’s not.
She can be infuriating,
but she’s not predictable.”

Langbroek was equally philosophical “Sometimes they go your way, and sometimes they don’t. You can’t let it lead you, and you can’t be reactive to what you think it’s telling you. We have to just do the best show that we can do, and enjoy it the best we can too. That’s a big part of the job. If you get too focused on that [ratings], that’s the antidote to happiness. That’s someone else’s job to worry about. Don’t get me wrong, we’re so thrilled with the response that we’ve got, it’s been really good. It’s a show where a man and a woman are equal, and there’s not another show like that on in the afternoons.”

By an equal relationship, Langbroek means that Hughesy & Kate isn’t founded on a man pushing boundaries and a woman reining him in. “It’s exactly not that. It’s just a full and vigorous relationship, like most people want to have or aspire to have in their lives. Or they might listen to us and vow that they never want to have a relationship like ours! But it’s just a full, proper relationship and we’re negotiating the world much like our listeners are.”

“Basically, it means that we both get to be funny,” surmises Hughesy.

And funny they are. When we asked them what they’d done in the ratings break [for the record, Langbroek went to Italy and Hughesy went to Port Douglas], they got into an in-depth discussion of how family holidays are different to, well, actual holidays. It’s very funny banter, and clear that the pair are as close as they appear on radio. “We haven’t wanted to kill each other for a long time now,” said Hughes when we asked if there was ever any tension between the double act.

“We’ve lost our will to kill!” exclaimed Langbroek, picking up on Hughes’ theme.

They do that a lot, take something the other has said and run with it. When we ask how they keep it fresh after 14 years together, they both referenced the other’s talent. “It depends very much on the other person. After all that time, Hughesy is still saying things that I find interesting,” said Langbroek.

He agreed. “You have to hope that your co-host isn’t predictable, and Katie’s not. She can be infuriating, but she’s not predictable.”

The banter continues. “I’m not infuriating! Write that down! If I’m infuriating, he’s exasperating!”

It rings true when they concur that hosting the show doesn’t feel like work. “We know each other so well that we don’t consider it work,” said Hughes.

“It doesn’t feel like that at all, aside from the fact that you’ve got the commitment. You have to have some meetings, but the show itself isn’t like work. It’s highly pleasurable,” agrees Langbroek.

Given the joy they take from their jobs, it comes as no surprise that Hughesy and Kate plan to keep on doing what they’re doing. “We’re not compelled to do anything unless we’re enjoying it. It keeps a certain aliveness to the show. You’re choosing to be there because that’s where you want to be. It’s good,” said Langbroek.

“Plus, we’ve got a contract so we’ll certainly be here for the next year at least,” cracked Hughes.

“You just have to go what you do”

As stiff as the national drive competition has been this year, it heated up even further last month with the return of ratings juggernaut Hamish and Andy to Southern Cross Austerero’s Hit Network. Hughes was firm in denying that he was feeling the pressure. “You can’t really feel anything about any other radio show, you just have to do what you do. There are some really good shows on the radio in the afternoon at the moment! People are always going to have their favourites, and we’re really happy with where we are. Personally, we’re happy because it’s our first time in a lot of the markets and we’re going well. We’re very new to a lot of people – all markets except for Melbourne – and people have really taken to us which is great. We’re a fresh team, people haven’t ever heard us before but they’re liking it. All you can do is what you do. What we do believe is that what we offer is different to what everyone else is doing. If people want to tune in to that they can, and if they don’t want to, they don’t have to.”

Stylistically, hosting a drive-time show is different from their previous gig in breakfast, the pair said. “It feels different, although I’m not sure why it feels different. It feels freer to me, maybe because when you’re doing breakfast in the morning you have to be cognisant of what news is happening and what people need to know to take them into the day. At the end of the day, you’re sort of liberated from that,” explained Langbroek.

“In the office, everyone is going home and you almost feel like you’re hanging around for after-work drinks! It’s more relaxed in the afternoons. People are happier because they’re on their way home from work rather than on their way there. I’m really enjoying it – it allows us to have a bit of a nightlife too. You can sort of go out at night which you can’t do with breakfast, although small children are a real pain in the ass in that regard,” continued Hughes.

Before spearheading Nova’s Melbourne launch, Hughesy and Kate worked together on both SCA’s Triple M and Melbourne’s Triple R