A deal with Google, continuing elimination of debt and a profit turnaround were the highlights of the Seven West Media results for the first half of FY20/21.

There has also been better news for patient shareholders. Long-term believers who remember the days over $1 five years ago still have a way to go for a complete recovery, but after hovering around 6 cents last year, hitting 50 cents yesterday is much better news.

Here are some of the highlights Seven West Media CEO and MD James Warburton shared with analysts yesterday.

“There has been a strong and improved performance in the Seven West Media December half and we made significant progress in our transformation strategy. The advertising market has improved materially from the lows of April to September with October to January returning to growth with Seven’s forward bookings looking positive for February and March.

“Revenue share in the half of 36.7% reflected the consequence of our old content strategy. Pleasingly this was more than offset by cost savings which had a significant and positive impact on our bottom line. An 18% reduction in operating expenses helped a 24% increase in underlying EBITDA.

“The work we have done to reposition the business in content, in transformation and capital structure means Seven West Media will capitalise on the continuation of the ad market recovery.”

“On broadcast and across BVOD we ranked #1 from July to December last year with a 39% commercial audience broadcast share and a 44% commercial BVOD audience share. The new content schedule is locked in for 2021 and it started on the first of February. Our share gains should deliver us significant improvement in revenue share in the coming financial year, given the typical 12 month lag between ratings and revenue.

“The success of our new content strategy in 2020 has delivered significant growth in both audience and advertising revenue for 7plus. It ended 2020 as the #1 commercial FTA BVOD platform in audience.” 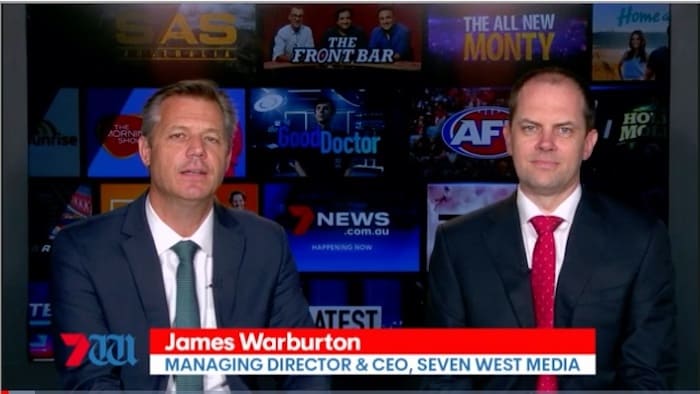 “At WAN the team has undertaken significant transformation, accelerating digital growth, cutting operating costs and executing a strategy to stabilise earnings and generate cash. $170m gross costs out remains on track and we have identified further annual cash savings of $30m.

“Cost discipline remains a critically important focus of our business. Improving Seven West Media’s balance sheet has been one of the company’s key objectives over the past 12 months. I am really pleased to report we have made significant progress in addressing this with a 42% reduction in net debt year-on-year, well ahead of the plans at the beginning of the financial year. Since the end of the half-year period we have retired $150m of debt.

“This significantly improved financial position has provided us greater optionality on our asset sales processes to ensure we maximise value for our shareholders.

“Put simply, we now have more options in terms of the future of the remaining assets that have been earmarked for sale. We are looking to monetise AirTasker in the upcoming IPO and proceeds will be used to pay down debt. Other venture options continue to be reviewed.

“We have received offers for Seven Studios which we are considering. Studios is underpinned by a very attractive annuity-styled earnings stream which is very valuable. We remain open to selling Studios if it is value accretive.

“In terms of TX Australia, while we have received indicative offers in the vicinity of $200m, [but] we couldn’t reach an agreed outcome with all stakeholders. We regard TXA as a non-core Seven West Media asset and will continue to explore our options.”

“We are well-positioned to pursue the next phase of our Seven West Media strategy – consolidation.

“The three pillars of the strategy are

“The success of our content strategy was evident in our broadcast results in the 2020 ratings survey. We dominate the day and are very strong at 6pm. The upside lies in improving our post-7.30pm performance which we have started to do.

“The decision to pivot to external production of international formats for key tentpoles was absolutely the right one. Cost per hour of this content might be higher but the audience opportunity is significantly greater. That will convert to a higher revenue share which will drop to the bottom line thanks to our lower overall cost base.

“The new tentpole programming delivered a 75% increase in total television audience compared with our previous content.

“We moved from almost five share points down in primetime in the first half of 2020 to three-and-a-half points up in the second half. Our audience share growth was even stronger among people 25-54 and 16-39.

“In the second half of calendar 2020 we clearly demonstrated when we deliver engaged audiences particularly after 7.30pm revenue share follows.

“2020 has seen us accelerate our advertising data proposition thanks to the October launch of 7REDiQ, our audience intelligence platform and an end-to-end audience solution for markets as they look to understand and reach their audiences. It enables marketers to fuse their own customer data to Seven West Media’s first party and partner data and apply that knowledge to marketing campaigns across Seven platforms including 7plus and 7News.com.au and then measures their results. We have been overwhelmed by the positive reaction from advertisers and media buyers and we are winning business on the back of the data product alone.” 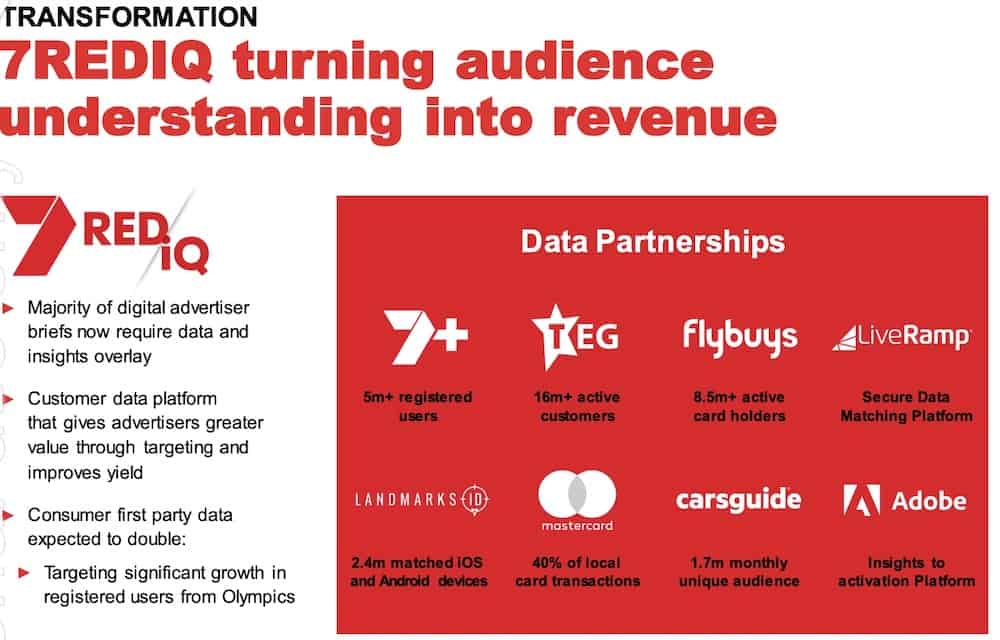