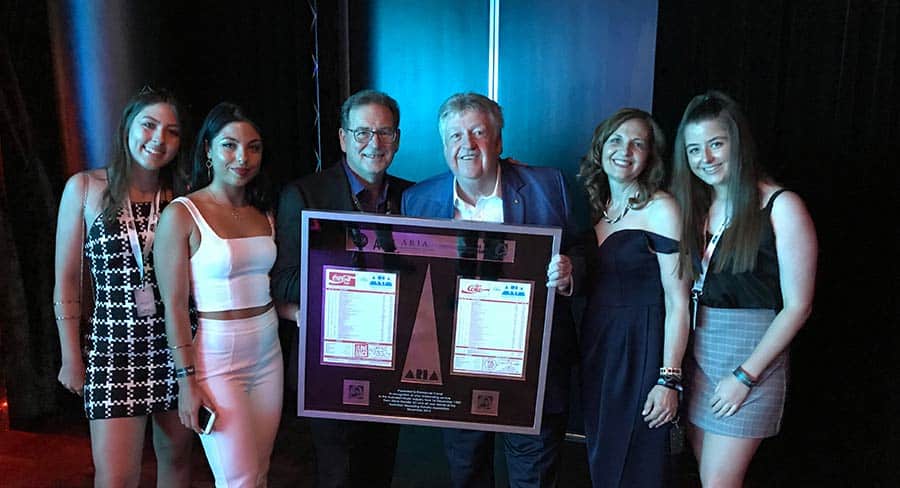 • Music industry exec on former boss and great friend: “You only get one Denis in your life”

Longtime Sony Music executive and former ARIA chief executive Emmanuel Candi has been missing from the Sony Music front bench recently after a health challenge forced him to step back.

But it would take more than that to keep Candi away from the ARIA Awards and friends and colleagues were thrilled to see him and his family at the event last night.

Speaking at the ARIA chairman’s cocktail party, which precedes the Awards show each year, Denis Handlin, ARIA chairman and chairman and CEO of Sony Music Entertainment Australia and New Zealand and president Asia, paid tribute to his former right-hand man, who has taken retirement. Handlin also made a special presentation to Candi, with a framed copy of the first-ever ARIA Chart.

Handlin said there were some stories he couldn’t tell about travelling and wortking with Candi over the years. But he did reveal one particular evening when they were out with one of the label’s biggest international stars. After a few shots, the artist decided to try to give Handlin a tattoo on his leg. After the artist rolled up Handlin’s trouser leg, Candi leapt across the room to intervene.

Speaking after the framed ARIA chart was handed over, an emotional Candi said the evening and the tribute mean a lot to him and his family. “It has been a great journey,” said the economics/law graduate who pursued his love of music and the music business. Looking back on his career, he noted that despite his education, “Nothing could prepare you for the music business. When you enter it you either learn quickly or you sink. It has been a priviledge for me to work with so many wonderful people over the years to support artists and to support songwriters to bring new Australian artists to the public.”

Candi posed for photos with his wife and children after the presentation. He was away from home for much of his career, from local trips to Canberra to visiting all corners of the globe. He joked it might take his family time to get used to his presence around the house.

He revealed to Mediaweek his wife had an early taste of just how unpredictable his travel plans could be. On a quick trip to Russia his return was delayed and he only managed to get home just in time for his wedding!

Addressing the chairman’s event audience, Candi said: “Most recently I have been working across Asia with Denis in helping build the industry right around the region.”

Candi noted one of the most satisfying parts of the business was funding the creativity of the artists it promotes.

Among the people Candi made special mention of were his recent boss and ARIA chairman Handlin, who he said had been at the forefront of making the industry better and championing Australian music since the first days of ARIA through all his time with Sony Music. “He also helps people in need through the incredible charity work and commitment that he has. I can’t thank you enough, Denis, for allowing me to be involved through the years.

“You only get one Denis in your life – someone who knows how to be always on the front foot, who cares with so much passion and ability. I have learnt so much from the man who has been like a dad, an uncle, a mentor, and I will be forever grateful for the wonderful support for me and my family over the years and particularly now.”

Candi paid tribute to former ARIA chairmen the late David Snell and the late Paul Turner. “I also want to thank people like Sebastian Chase, Lindy Morrison and Peter Garrett – people who really give a damn, stand up and do everything they can for the artists and the industry.”