Digital Ratings (Monthly) fuses together Nielsen’s pre-existing PC panel for home and work with nationally representative panels of Australian smartphone and tablet internet users, as well as census tagged data for PC and mobile web. It provides an independent, cross-device view of the total digital audience.

The data allows publishers, who are already investing significantly in mobile, to see how their audiences have grown across all digital devices. It also enables agencies and advertisers to make more accurate decisions and gauge the reach of their digital investment – giving a true picture of their total audience across key digital devices.

The release of Digital Ratings (Monthly) is the second of three planned major upgrades to the digital audience measurement system in Australia. Stage one saw IAB Australia and Nielsen release the market’s first view of Australians’ mobile and tablet audience data.

The third stage on the IAB Australia and Nielsen roadmap is Digital Content Ratings which will leverage the scale of third-party providers.

At a total market level, Digital Ratings (Monthly) adds over one million Australians to the active digital universe. Australians engaging via mobile devices, and particularly via apps, are the primary driver of this growth; Nielsen is now able to include them in the universe estimate via fusion of their smartphone and tablet panels. The total active digital universe in Australia for February 2016 is close to 19.6 million people across computers, smartphones and tablets.

“We also see a significant increase in total time online per person from 32 hours to 49 hours,” added Perry. “During February 2016, Australians spent more than 28 hours just on their smartphone, higher than any other digital device.

“The advancement in our methodology means better measurement and reporting of time spent engaging via mobile devices which is incredibly important for our clients who have invested heavily in mobile content and strategies. I expect to see continuing growth in mobile investment in the coming months now that the industry can trade with increased transparency, measurability and confidence,” Perry predicted.

The Nielsen data reveals the true size and relativity of the different device-level universes. While computers are unsurprisingly still the device of choice for most Australians (approx. 18 million people), the data shows how previously uncaptured mobile audiences compare in scale and engagement. Smartphones saw over 13 million people actively browsing websites / apps in February 2016, and tablets saw 7.5 million people doing the same. 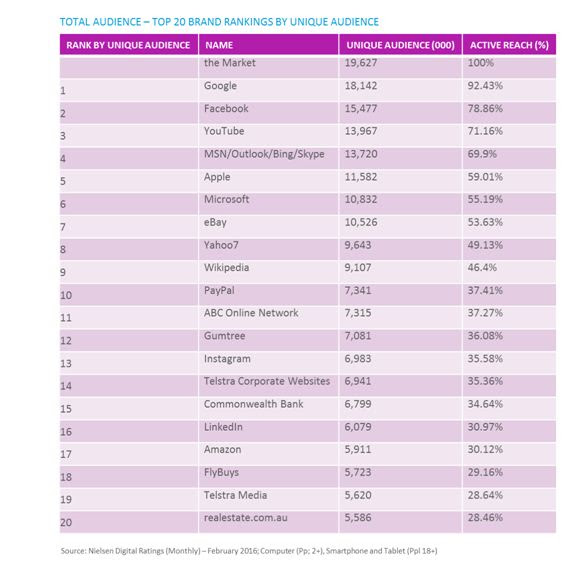 THE BIGGEST INCREMENTAL GROWTH CATEGORIES
From an audience perspective, the photography category experienced the largest increase from the fusion of smartphone and tablet devices and more than doubling in size. Widespread adoption of applications in this category, including Google Photo and Samsung Photo Editor are key drivers. Special occasions were almost exclusively driven by Australia Post and its mobile app service – lending itself well to the on-the-go nature of mobile engagement.

The travel category rounds out the largest growers of unique audiences, admittedly off an already large desktop audience. Google Maps, Apple Maps and Uber are all key contributors.

From a time metric perspective, the search engines, portals & social networking category was the clear leader reporting a 205% increase in total minutes from desktop only to total audience. This is driven by Facebook, Google Search and Instagram audiences, especially from apps.

Entertainment and Family & Lifestyle also saw notable rises, jumping their total minutes across all key digital devices by 177% and 174% respectively.