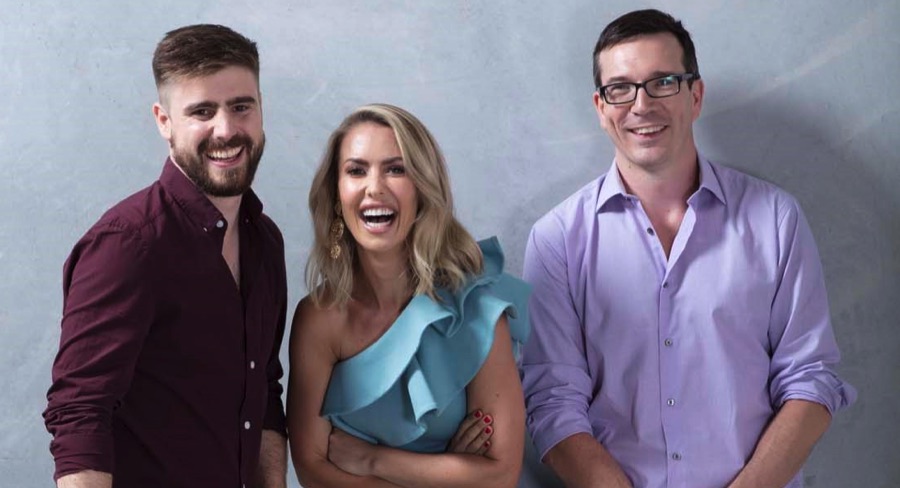 Hit 105’s Stav, Abby and Matt tallk changes to the team and its return to the top.

The secret to a successful breakfast radio show is genuine friendship. That is what many presenters tell Mediaweek anyway. This is what has kept Hit 105’s Stav Davidson and Abby Coleman going in the last seven years as members of the on-air team came and went. The duo first started hosting breakfast on the station, owned by Southern Cross Austereo, in 2011. Matty Acton joined the show at the beginning of 2017.

“Radio is a dying art form,” Davidson told Mediaweek, exhibiting the sarcastic sense of humour that he is known for.

“No, no, no, no,” Coleman said in quick successions, cutting her co-host off.

“We are enjoying the tail end of its life before it all goes onto podcasts and streaming. It’s been fun and I am now looking forward to the next challenge,” Davidson continued as his co-hosts laughed in the background.

“I actually think radio is coming back around,” Acton said.

“Radio hasn’t seen the decline that TV has,” Coleman said.

It doesn’t take much for the trio to start banter about any given subject. They spoke to Mediaweek recently one morning after the Hit 105 breakfast show.

When it comes to discussion about the cutthroat nature for commercial radio, Sydney and Melbourne are the two markets most commonly discussed.

However, there is a heated contest taking place between the breakfast shows on commercial radio in Brisbane too. Hit 105’s Stav, Abby and Matt have been #1 in the city since the start of 2018. This was the first time they had topped the ratings in the daypart since The Bachelor host Osher Günsberg departed from the show after two years, in late 2017. Since survey two of the radio ratings for 2018, Hit 105 breakfast has been sharing the top spot with rival station 97.3’s Bianca, Terry and Bob.

“There have been a lot of movements in the last year or so. That’s why things have tightened up so much,” Acton said. “In every other market, there are big gaps between each of the stations.”

The breakfast team keeps a keen on eye on how the show’s ratings are going. “They are extremely important because we get bonuses on them. Money. Is. Everything,” Acton proclaimed, with his voice getting louder with every word. “Ratings are what we live and breathe by,” he continued, returning to his normal voice. “That’s what we get judged on, especially with advertisers.”

However, the presenters emphasise they don’t succumb under pressure when there is a dip. “It’s about content, content, content,” Davidson said. “As soon as you start chasing ratings, you will end up losing them. You just have to do the best show that you can do and hope that the ratings follow.”

What makes the show work?

“We have three very loose cannons here,” Acton replied straight away as the others laughed at his comment. “We all bring different elements to it and we are all friends.”

“I was reading an article the other day saying that no breakfast show gets along,” Coleman added. “We take offence to that because we genuinely are friends.”

Stay tuned for part two of this conversation where Hit 105’s content director Matthew Eggleston talks about the station’s place in the competitive marketplace of advertising in commercial radio.