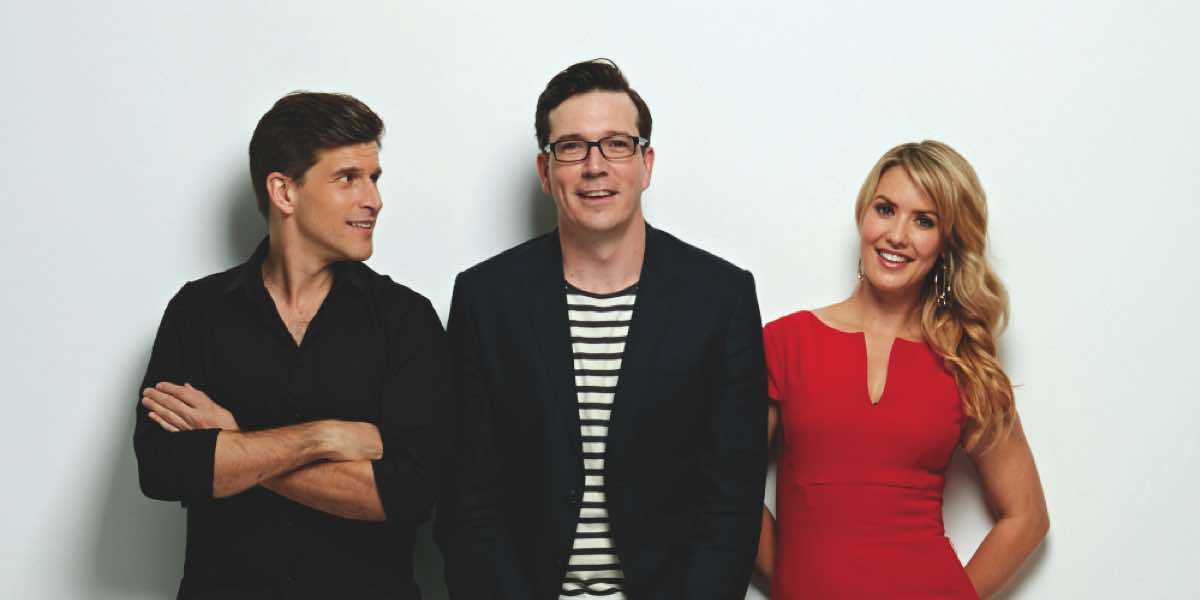 After a decade overseas, The Bachelor host Osher Günsberg is eager to get back in to radio

• After a decade overseas, The Bachelor host was eager to get back to radio

Osher Günsberg (pictured L) is thankful. He’s thankful to the executives at Southern Cross Austereo for giving him a chance to work in radio again. He’s also thankful to his new co-hosts Abby Coleman (pictured R) and Stav Davidson (pictured C) for welcoming him onto their show.

“I was very happy to go wherever they would have me,” Günsberg said. “I’ve been out of the country for 10 years and I even said to Grant Blackley: ‘I understand. I might have to go off-Broadway for a while.’

“I’m starting again. Thankfully he put me in a massive capital city. I’m very grateful for that. I’ve been away for a long time. I was in America for 10 years. You can’t just walk in and say ‘I’m back’. I think you have to be realistic about your expectations and your capabilities. Given the opportunity to do some test broadcasts with Stav and Abby last year was brilliant and it really felt good to work out some stuff with those guys.

“Ultimately Stav and Abby had to give me the thumbs up. These two have had such a close, fantastic, respectful working relationship. For them to say, ‘He can come into our enclave’… Anyone who works in the industry knows that the breakfast radio studio is one of the closest possible working environments you can be in. It really is. You’re smelling each other’s breath, you hear about everybody’s issues through their day. If somebody is having bad energy, you’re 30cm from them, so you are affected by it. It’s an intimate workspace. So, for these two to have the faith in me that I would be okay coming into their bubble of safety they’ve created around them, I’m honoured.” 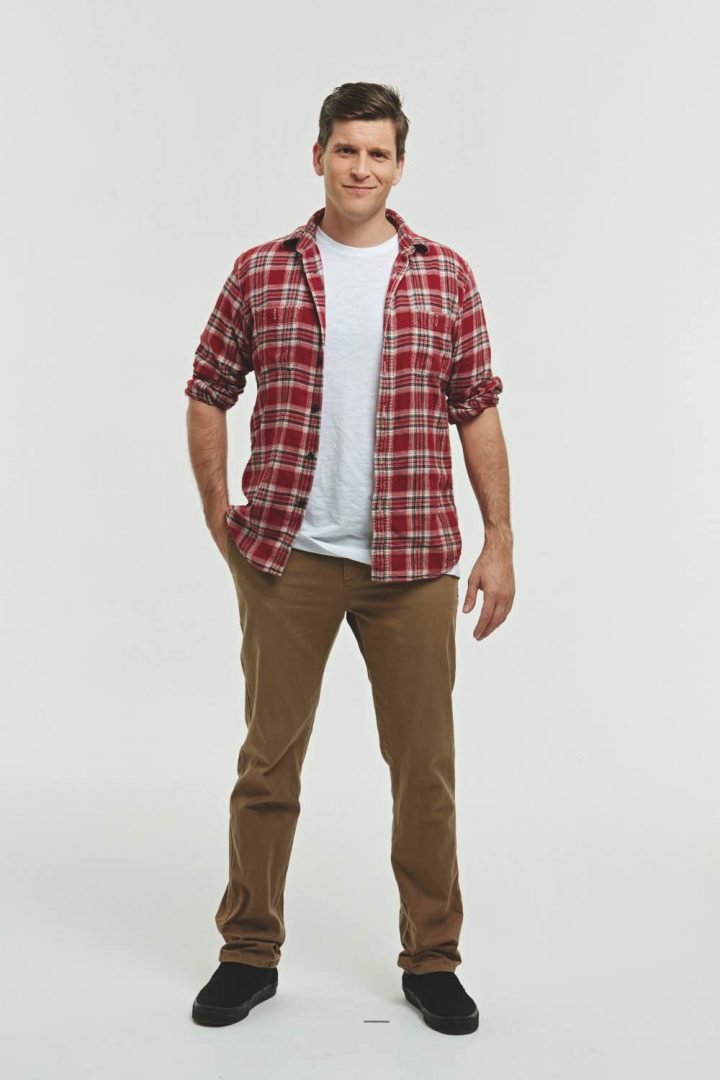 Günsberg is also thankful that SCA is being so flexible with his schedule that will require him to broadcast away from Sydney. “I’m going to be in Brisbane as much as possible,” Günsberg insisted. “SCA has quite a history of being very flexible with their anchors being in different parts of the country and world. They didn’t even blink when I told them I’m going to have to be in Sydney for when we’re shooting Bachelor.”

For Günsberg, starting the breakfast shift in Brisbane on Hit 105 is kind of a return home to the station where he developed his radio sea legs. But he falls short at thinking of it entirely as a homecoming. “I left when it was B105, the station was at Bowen Hills and I was the midnight to dawn announcer. I’m coming back, now it’s Hit 105, it’s in North Quay, and I’m on the breakfast show. The media landscape looks nothing like it did when I left.”

He laughs at the question of whether he’s finding it difficult not to call the station Hit 105, but he’s pragmatic about the brand change. “I don’t say it. I’m still stumbling over it,” Günsberg admitted. “They stayed who they were for quite a long time. Not many stations do that. I really like the format.”

“Also, because they knew I could do the job.”

Radio is a small industry, but Günsberg was quick to point out that relationships in the industry are the same as in any other small industry. “Like radio, television, the startup scene, or the investor scene, in my opinion you just can’t afford to be an arsehole.” Günsberg explained that people need to remember that while they may have it good now, that might not always be the case. He offered the advice that to maintain a respectful relationship, it’s nice to keep track of people and where they are at in their careers. “That’s how gigs come around,” Günsberg said after praising the convenience of LinkedIn.

Once Günsberg knew he was going to move back to Australia, he reached out to Craig Bruce and Irene Hume in July last year. Günsberg knew that he wanted to return to radio. “Nothing quite ticks my clock like radio does,” he said.

“I kept in touch with those guys and kept talking to them about what I was going to do and they were listening to my podcast and seeing where I was at and what sort of things I was doing. I sat down with Grant Blackley who has a great vision for where the company is going to go.”

While Günsberg is known for hosting the TEN reality show The Bachelor, keen digital consumers are highly aware of his popular podcast which offers long-form interviews with people Günsberg finds interesting. His diverse range of guests recently include composer Damian Barbeler, Home and Away actress Cassie Howarth, ReachOut CEO Jono Nicholas, Waleed Aly, Robert de Castella, and musician Jeffrey Foskett. Conversations on his podcast explore diverse areas that interest Günsberg that explore sexuality, spirituality, politics, news and culture. It is far removed from what you expect from FM radio breakfast.

“It was super important to me that the guys had been listening to my podcast and knew this was the sort of stuff I wanted to talk about,” Günsberg explained. “I wanted to have more authentic conversations on radio because of the way the media market has changed. The radio used to be the gatekeeper to information, to new music, to news, to traffic. We don’t have that role any more, but that’s okay. What we can have is the ability to form an authentic relationship with our listener that’s very one on one, because it’s usually one person alone in their car, or one person sitting on the bus listening to their headphones. Bringing that authentic relationship is something we are able to do very well. That is, for me, a continuation of my podcast.

“Obviously I know where I am. It’s a different version of what I do on my podcast. I’m not going to sit on Hit 105 in the morning and talk about sex trafficking.”

While open, honest conversation flows freely on his own podcast, this same openness gave Günsberg some largely unwanted attention during his first week on air at Hit 105. A conversation about the fluidity of sexuality led to Günsberg revealing that he has kissed men in the past. The admission became fodder for news sites for the rest of the week.

“What made me a bit upset about that was that some of the headlines were misreported,” Günsberg said. “Some of the headlines were misleading and didn’t tell the whole story. Especially when that, for me, wasn’t the point of the story. The point of me talking about it was I thought it was important to speak about the fluidity of sexuality and that for some people it’s not immediate straight away. I don’t think it’s spoken about enough. I thought I should talk about it. So, I did.”

The experience has made Günsberg a little more reticent on air. “Whether I’m a little more reluctant, I’m not going to lie to you, When I have to think, ‘Oh shit, I have to call my fiancée that I just proposed to and tell her that News.com has just written an article…’ Fuck me! I’ve talked about it on my podcast before. It’s not news.”

While he may have taken a battering during the first week, Günsberg remains thankful for the opportunity that he has been afforded. “I’m very grateful to be where I am. Nobody gets a shot at the title twice. Especially after going away to another country and then coming back and getting a gig like The Bachelor and being given a second shot after maybe not getting it too right the first time,” Günsberg said.

“I cannot believe my luck. And I’m grateful every day.”