On the road exhaustion – three songs in three days

For the penultimate day of Hamish & Andy on-air at Southern Cross Austereo’s Hit Network, the hosts are having a rest day.

So far this week the duo have travelled by private jet to gigs at an RAAF airbase in Newcastle, crossed the Tasman to a gig just outside of Hamilton in New Zealand, and then fronted up for a big Brisbane show.

Mediaweek asked them how in need of a rest day they really were. “We have played three songs in three days and we are absolutely exhausted,” said Hamish Blake.

Hamish: “Sorry… it was one song three times over three days.

“On Wednesday night we were at a battle of the bands and the gig went very successfully. When we came offstage with Jess Mauboy we were treated to a very iconic rockstar moment when we were backstage hugging and hi-fiving each other and hearing the crowd chanting ‘encore’.

“We then had to do a very un-rockstar thing and hide backstage because we don’t have another song! [Laughs]

“For the first three chants of ‘encore’ we thought it was great, but we then realised we could not deliver what the crowd wanted. We were terrified out the back that we wouldn’t start a riot.

“Life on the road with one song is tough.”

The Hamish & Andy touring band – Cool Boys And The Frontman – has been competing with some impressive talent. In Newcastle it was Ricki-Lee, in New Zealand it was Bret McKenzie from Flight of the Conchords and in Brisbane Jessica Mauboy. There were also three younger rock bands on the bill in Brisbane. 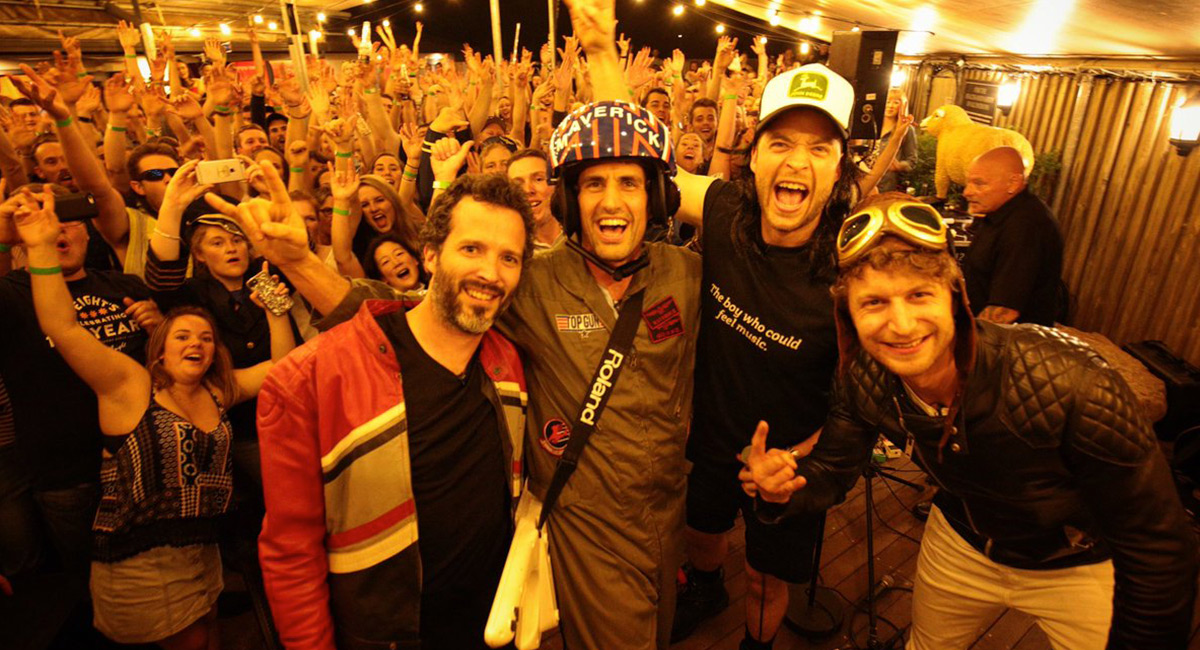 Bret McKenzie and Cools Boys And The Frontman

“We got beaten by one of the bands,” admitted Andy. “It was very disappointing.”

“Comprehensively smashed” was how Hamish described the defeat.

Andy: “Hence the need for a rest day. We will be recalibrating, soul searching. We had originally planned to soul search at Uluru. Instead we have decided to return home, see our loved ones for consoling, and then go out and rock Melbourne’s Margaret Court Arena on Friday night.

Mediaweek was talking to Hamish & Andy in the back of their tour van, which had collected them from Melbourne airport after the flight back from Brisbane.

Asked about what they had learnt from three days on the road ahead of the final gig, Hamish explained:

“I am so glad we were able to use the trip to sharpen up the skills. It is unorthodox, but a successful method, to fly all the way to one of the most rural parts of New Zealand for a test gig.”

Andy: “Sia did the same thing.”

Hamish: “A lot of locals told us they had just seen Sia come through doing a few pub gigs to sharpen up before she plays a big stadium.”

That New Zealand gig was attended by around 500 farmers and the great Bret McKenzie. Not a bad result given no broadcaster takes their show in NZ and their popularity continues there from their early days on Rove. People keep up-to-date of course via the Hamish & Andy podcasts. 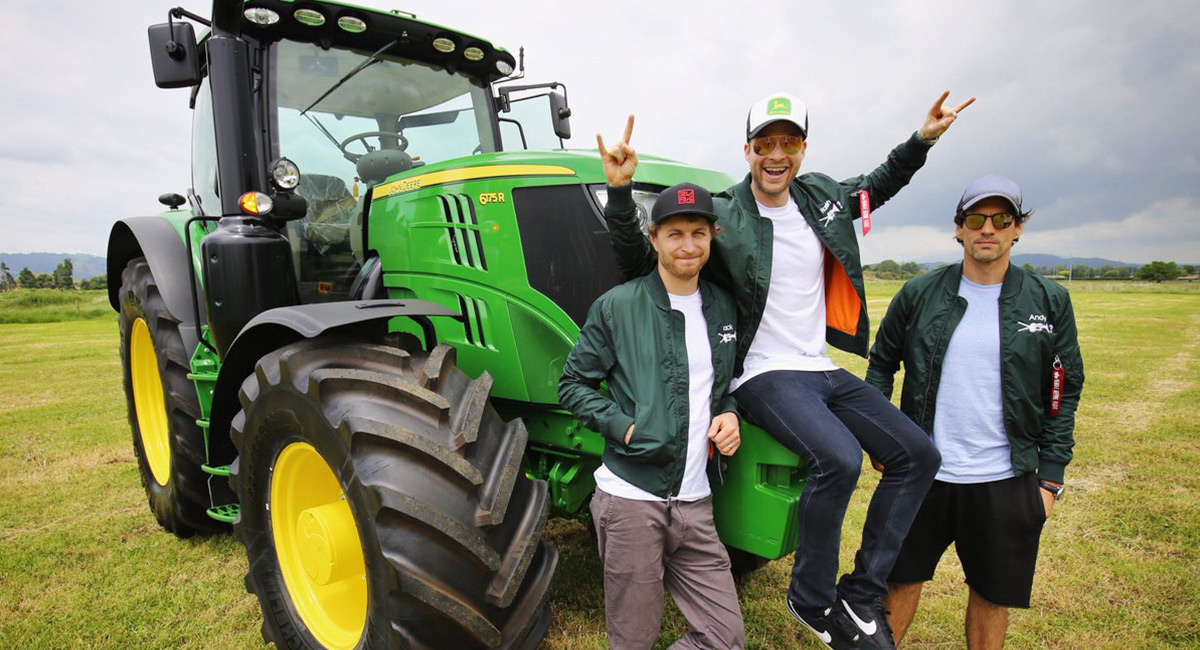 Cools Boys And The Frontman in NZ

The flight back to Melbourne from Brisbane for Cools Boys And The Frontman was by a commercial airliner (in economy class) after the band lost the use of the corporate jet they had been travelling in.

Hamish: “We had been given use of the private jet for free until the charter business found a paying customer who was able to muscle us out of our final two days of jet use.”

Andy: “A much richer person has got use of the jet now.”

Hamish: “It was probably about time we had to fly commercial again as we were starting to get addicted to private jet life. It was good to be back with the public. You do get a bit lonely in a private plane. I hated all that champagne and space.”

The plane’s pilots doubled as air crew once under way to keep the passengers happy.

Andy: “The best thing was being able to leave whenever you want and not having a schedule. When we arrived in Hamilton they said we could even drive our car onto the tarmac if we wanted to.”

Hamish: “We realised we hadn’t flown into the busiest airport in the world.”

A lot of big touring groups use merchandise to help finance their operations. Hamish & Andy had developed a special range of merch for the Cool Boys And The Frontman tour. With an almost straight face we asked about sales for the hi-vis tour jacket.

Hamish: “Ha ha, you might laugh, but it is not the worst seller!”

Hamish: “It is the second-worst seller. The tote bag unfortunately is languishing.” 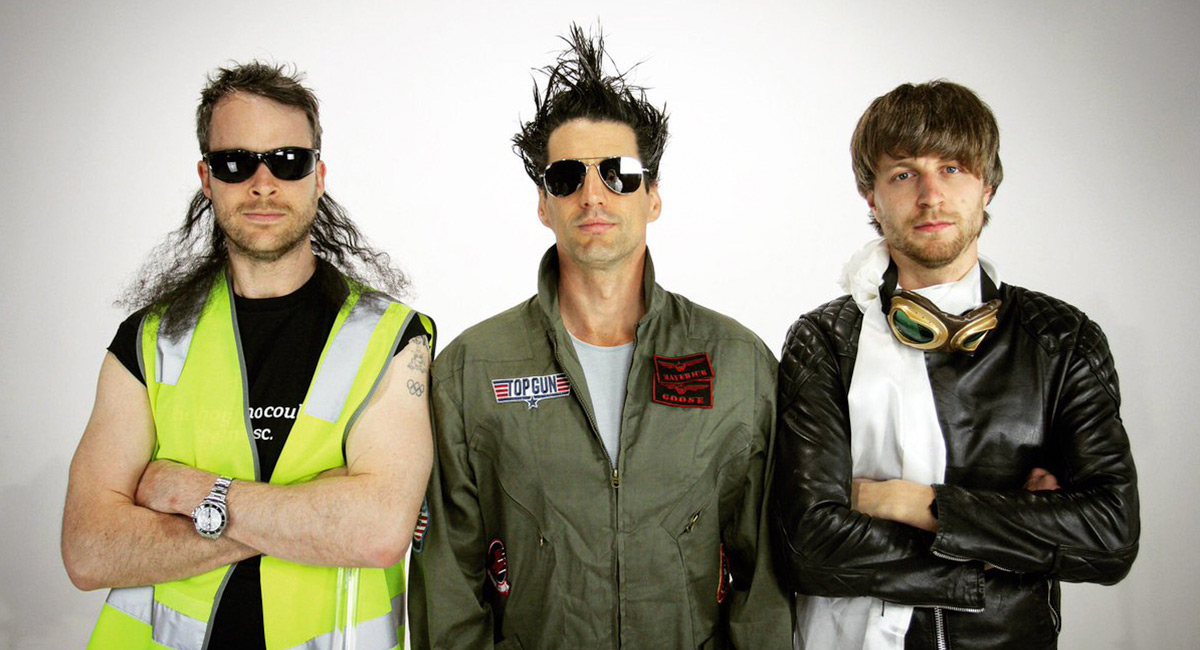 Cools Boys And The Frontman and the hi-viz tour jacket

Andy: “We did the maths on the hi-vis vest and we actually don’t make any money on it.”

Hamish: “We might make a slight loss on the hi-vis vest, but it is very visible. It is worth taking a hit on those.”

When asked if they had ever merchandised a hi-vis vest before, Hamish told Mediaweek. “No…not many bands do.” [Laughs]

Andy: “I was vehemently against doing it this time.”