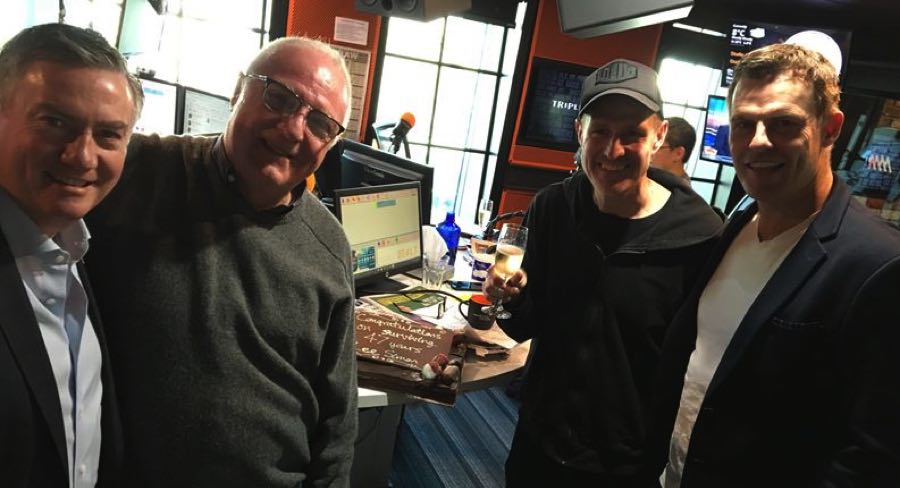 “My career was started by absolute chance.”

Some of the warmest applause, including two standing ovations, was heard for departing Triple M announcer-turned-programmer-turned-producer Lee Simon, who was named 2018’s Hall Of Fame inductee.

“My career was started by absolute chance,” he told the audience as he started his eight-minute (“I’ll try to keep it tight”) speech.

“In 1971 I started working full-time for the ANZ Bank. One day in the city I was walking past 3AW and saw a sign for 3AW Radio School. I signed up for a 12-week course Tuesday and Thursday nights and halfway through Wayne Brown from 3AW took me aside and told me a job had come up for a panel operator. I didn’t have time to think about it because the job started the next Monday. So I said yes.”

Simon told how he quit the next day, then started at 3AW at 5.30am as panel operator for Peter James in 1971. It didn’t go well initially, but Simon survived.

“I ended up in Bega later that year after jagging a job up there. There was no music director and no music format. We did just whatever we wanted.

“I apologise to everybody in Bega for the bombastic British rock I played for the duration.”

Simon said the Bega playlist while he was on air there consisted of people like King Crimson and Uriah Heap.

He later return to Melbourne, working at 3DB and then in Hobart at “the wonderfully named” Boss Radio 7HT.

The radio great Holger Brockmann (aka Bill Drake) heard Simon on air and told him there was a job going at 2NX in Newcastle. “I didn’t have to think about that – 2NX at the time was part of the Digimay Group. It was a programming consultancy run by Rod Muir and they had glued together 4IP, 2MN, 2NX, 2SM, 3XY and I’m pretty sure 5AD in Adelaide too.

“There I was living the dream at 2NX. Rod Muir was king and he wore the crown.”

He soon moved to 2SM and then to his favourite radio station and the one he really wanted to work for – 3XY.

“A little TV show then came along. When I didn’t think my career could get any better, it did. At the end of the 70s I worked as program director for EON FM, building a radio station from scratch.

“I won’t go through the next 38 years because we don’t have the time. The story of Triple M is very well known – EON FM became Triple M.”

Simon thanked Michael Gudinski and Andrew McVitty for TV show Nightmoves. “It was the same as my day job, but with a few cameras.”

His final two acknowledgements were for longtime Southern Cross Austereo board member Peter Harvie and then a tribute to his mum and dad who supported him, his children and his wife Jan.

“Tonight is my official retirement and that is it from me. I walk away from this industry knowing it is in the best of hands.”