Two hundred of Australia’s best and brightest minds were brought to Canberra in early November by youth website Junkee for Junket – an unstructured conference with no Powerpoint slides and no set agenda, intended to stimulate conversation that would then filter back into the community and through to the Junkee website.

An offline event, Junket was aligned with the Junkee website’s core focus on pop culture, comment, and politics. Junkee is the flagship title of the recently re-branded Junkee Media, formerly known as Sound Alliance.

Facilitating what was termed an “unconference” was Junkee managing editor Steph Harmon, who returned from the three-day conference feeling unwell from exhaustion, but satisfied about the breadth of subjects and networking facilitated through Junket.

In total, 57 sessions were held, covering more than a hundred topics.

More than a talkfest, Harmon explained that the event was designed to offer actionable pathways to take the conversation out into the world, “A lot of collaboration came out of those sessions. The idea was that we’d have PR professionals, and advertisers sitting on sessions where scientists were saying they need to get the message out.

“The idea of Junket was mainly to connect people so they could talk to each other and find new people with different skills that could help them with their specific project or idea. The aim is then that Junkee will continue some of those conversations on the site, we’re going to facilitate a few events in the aftermath, and we’re going to help people connect so they can keep working together. The idea is that the conversations were supposed to start at Junket.”

For Junkee as a publication, Junket serves as a foundation to serving content that is relevant to the Junkee audience. Harmon succinctly said, “We are going to try to use some of the conversations started to set the agenda of Junkee for the next year. We’re going to start covering a lot more of these issues that came up as important to young people, because that’s what they are.”

Harmon elaborated further: “In coming months you’re going to start seeing a lot of Junket content coming up on Junkee. A lot of delegates are writing their own articles, or working with some of our writers, to get their issues on the Junkee site as well.” 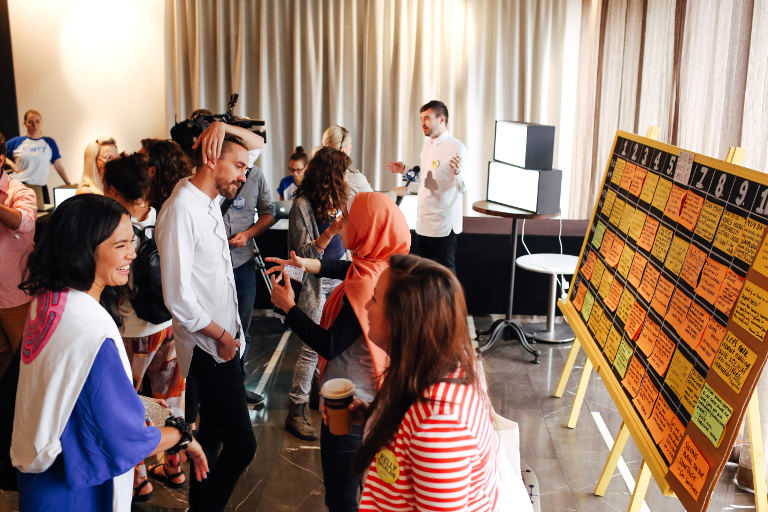 A snapshot of the Junket event

As well as content building, events like Junket are important to the site’s branding and visibility. “We wanted to connect with our audience offline. We’ve been moving into the event space for a while,” Harmon said.

It isn’t the first time Junkee moved into the event space, having held regular movie screenings at Sydney’s Golden Age cinema and popular storytelling sessions at the Chaser’s Giant Dwarf theatre. While these events are great for the Junkee brand, they are yet to deliver much of a financial return. When asked whether these events made money, Harmon laughs. She explained, “The most we made from the Giant Dwarf panel sessions is $8.

“Junket, I think, broke even. I don’t think we profited from it this year. The aim is, obviously, for Junket, because it’s such a big venture, they want to profit from it eventually. Mostly, for us, events are about brand awareness. So, breaking even is important.”

Harmon is very clear on who the Junkee audience is and what their passions are. “Our market is 18-35-year-olds. We actually have a 50/50 gender split, which is pretty remarkable, especially considering how much feminist content we have.”

Junkee is one of several sites that cater towards the always-connected youth market, with BuzzFeed the most regularly cited competitor. Harmon explained that she doesn’t really see BuzzFeed as competing in the same space, “BuzzFeed is more mainstream than us. We are a bit more niche and we definitely have the freedom to take more opinionated stances and we definitely exercise that freedom quite freely. We both find ourselves covering the same stuff. We just have our own tones.”

As a niche culture-focused publication which Harmon freely admits reports on subject matter that matches her own interests in TV, film, and politics, there is a danger that the site may have difficulty drawing in a larger readership. Harmon and her team are well aware of the need to grow and explained that they will soon be “introducing new sections to Junkee to combat that exact problem. We’re going to be moving into different spaces soon. There are some obvious new directions that we can easily start writing about. It’s basically building the category tags – Film, TV, Politics, Play, Food.”

There is also a new Junkee Media site that is set to launch soon, a lifestyle entrepreneur finance site. The youth-focused site will be framed around “How to adult better”.

While the Junkee Media empire continues to build, Harmon reported that they are still experiencing growth in their traffic despite so many other international brands launching in the local market.

“There might be a ceiling somewhere, but we haven’t felt it yet,” she explained.