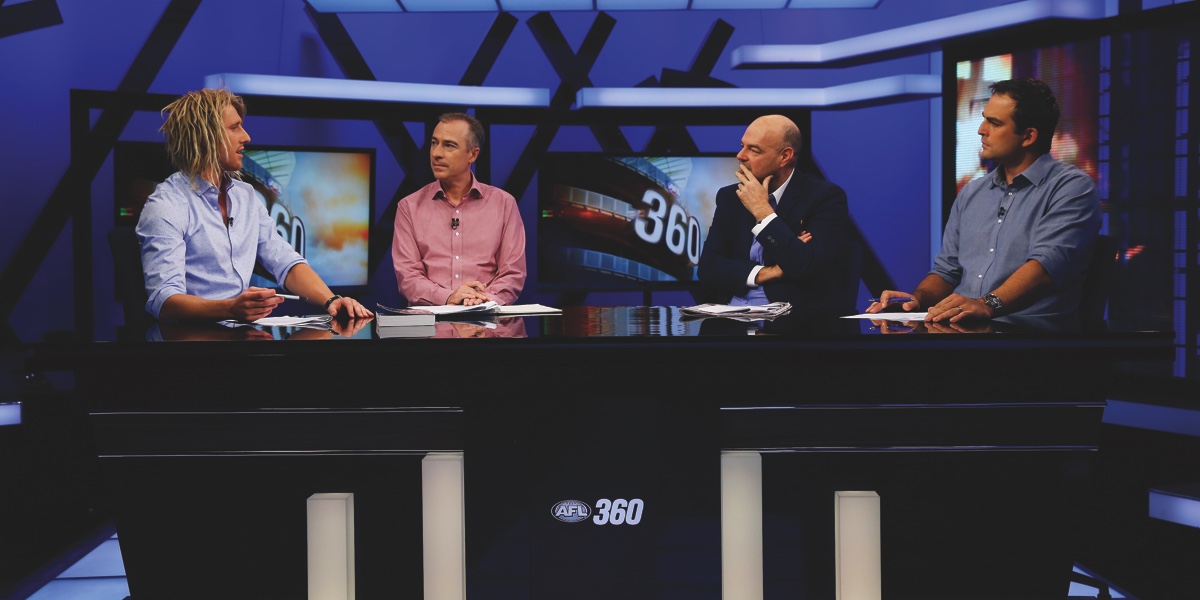 Lots of AFL media in Melbourne work hard over the winter months covering the code. None work harder perhaps than one of the hosts of Fox Footy’s AFL 360, Gerard Whateley and Mark Robinson. The program is the most-watched daily show on subscription TV from Monday to Thursday each week.

The program recently broadcast its 500th episode and Whateley spoke to Mediaweek shortly after.

Asked how big a celebration 500 episodes was, Whateley grinned and said: “It was more amusing than anything else. If you can hang around long enough you will rack up big numbers.” [Laughs]

The broadcaster, who is never far from a sports stat, worked out how he and Robbo reached that milestone: “We started off as a weekly show and we did a year and a half which must be 50 shows. We then went to four a week and we managed to reach 500 during our fifth year. There was a moment where I thought, that is a lot of hours together.

“We treated it just as we thought we should – we had a good laugh on the anniversary.”

A number of elements of the program have been refreshed for 2016. Whateley flagged the coach’s session as perhaps the best 20 minutes of TV they deliver every week. “Chris Scott and Nathan Buckley are the two most engaging coaches on the broader aspects of the game. Every coach is immersed in their own concerns at their own club, but Scott and Buckley are fascinating when it comes to the bigger picture about the game.

“The two have a rapport and they played on each other a fair bit in their playing days.”

The onscreen clash between Buckley and Mark Robinson earlier this year over a story Robinson had written about Collingwood was one of the early AFL 360 viewing highlights. “That segment probably ran for 15 minutes and I did nothing more than facilitate the engagement and then I stayed out of it. They had to work through it on air. They didn’t manage to resolve it, but we have always promised coaches and players that if there is something they have a problem with, particularly on the media front, they should bring it and debate it on the show.”

Richmond’s Jack Riewoldt has joined the Tuesday night lineup. “He has absolutely got something in the way he talks and he has a wonderful sense of humour. It has been a tough start for him this year with Richmond not performing as well as expected, but he remains vibrant. He is eminently likable and he has not previously had the forum to show his full personality. He and Jordan Lewis also have a good onscreen rapport.

“Brian Lake has joined the show too and he brings a different disposition out of his football career. He is really thoughtful about the game and he is bringing multiple things every week. All you can ask from a player who is making the transition into the media is to contribute and he is certainly doing that.

“We are also working with Dyson Heppell who talks us through how he lives through a gap year imposed by a doping ban. His first interview laid bare how he felt about all of it and his discontent with Essendon which he was very clear about.”

Whateley revealed when they are planning AFL 360 content, they factor in fatigue viewers may have with the long-running Essendon saga. “On the nights where there is genuine news with a development in the story, there is a spike in ratings. For the rest of the time we have to be mindful how many times we go back to it because there is fatigue with it and it draws attention away from what is happening on the field.

“Essendon was the key topic over the four years in the biggest scandal the game ever had.”

The show’s small team applies a similar rigour to all stories they cover as to viewer interest and where does it sit in the scheme of things. “I like the things that change the overall picture of a season like the Giants winning regularly which has changed the narrative of the season so far. We first cover the important victories each week and then we talk about the losers when we get there.” 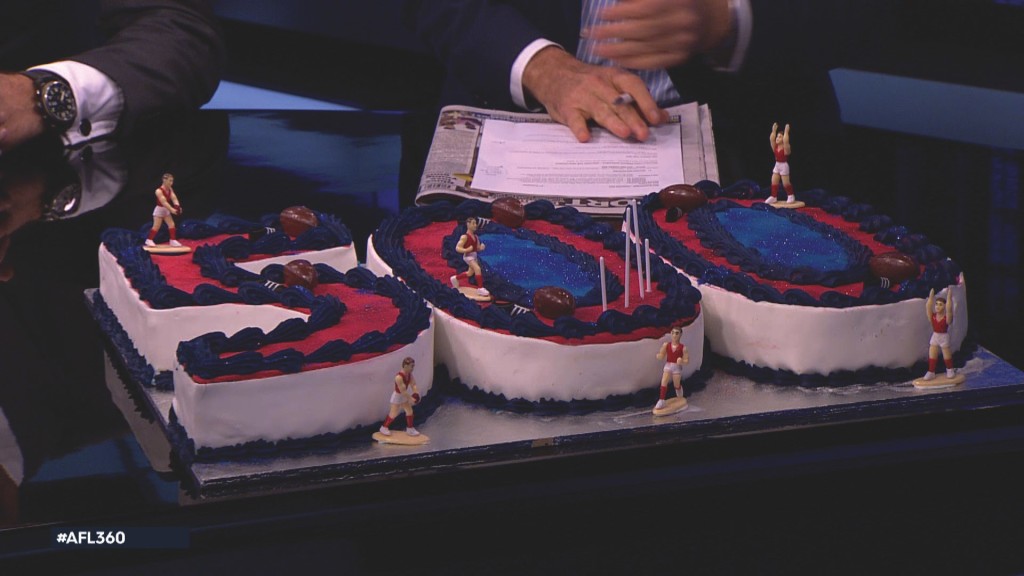 Whateley said media coaching for players at AFL clubs can be a good and a bad thing. “People who have worked in AFL for a long time would say that now the media is more tightly controlled. That’s not much different to politics. A lot of what happens in football media mirrors what happens in the political cycle in Australia which mirrors what is happening on an international scale. The message is very tightly controlled.

“Once a player has finished in that environment, if they are not prepared to say anything, they won’t last in the media.”

From player to pundit

Whateley was asked about how they work with potential guests before they are employed on the show. “At the end of last year we looked at what was potentially available in terms of players. We all had enough experience with Brian Lake during his career to know that he was unique. We thought he might bring something offbeat after a very successful career which included winning three premierships with Hawthorn on the way out. Everybody who has had anything to do with him knows he thinks about life and about football in a different way. We approached Brian and we were very enthusiastic – we really wanted him to do it.

“The most important thing for the ex-player is they have to commit to it, they have to really want it too. They can’t just rock up on a Thursday night. Rocking up doesn’t get it done on TV any more than rocking up at a footy club gets it done. They need to understand it, engage in it and contribute to it. Brian has a really good understanding of it all.” 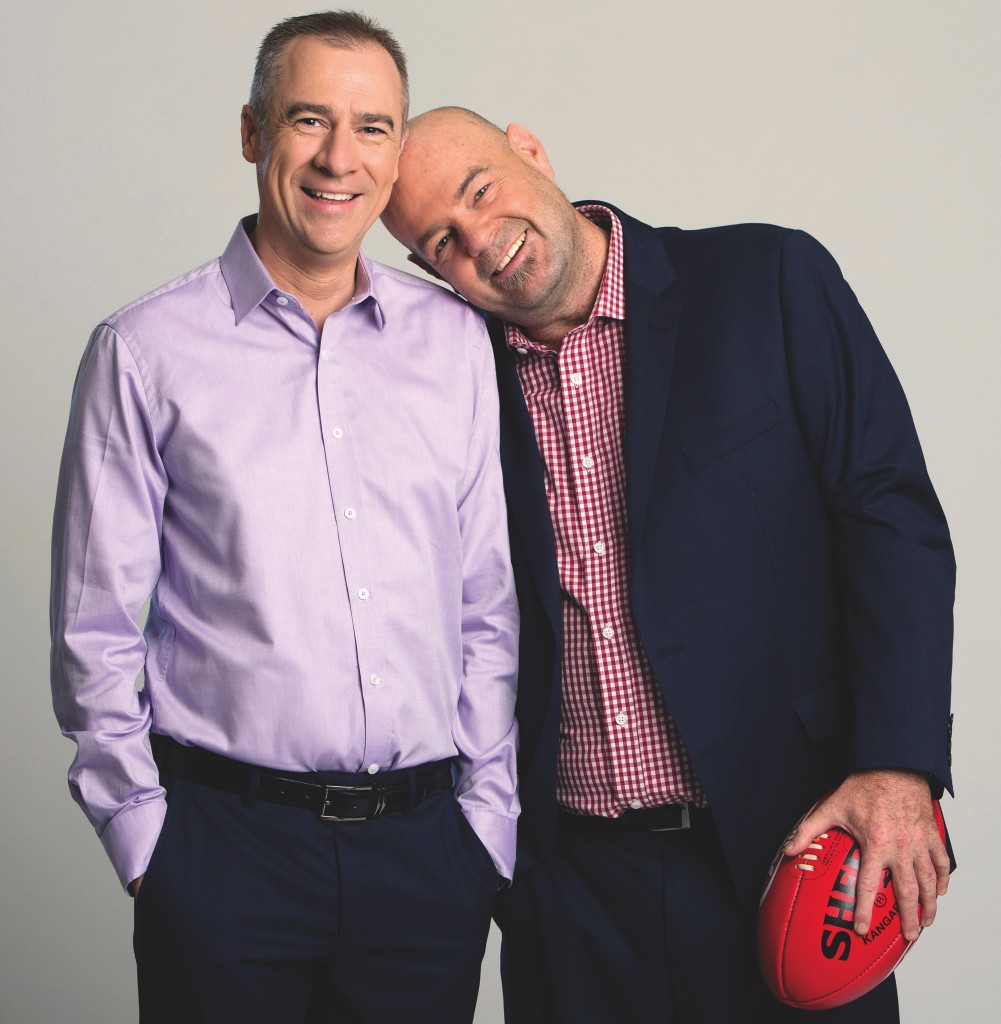 Gerard Whateley and his co-host Mark Robinson. Robbo is also chief football writer for the Herald Sun and works on radio for SEN 1116

In addition to his ABC Radio role calling AFL games, Whateley hosts ABC TV’s The Offsiders and writes for the Herald Sun. He also knows his way around a racetrack and has written a bestseller on Black Caviar.

Mediaweek asked him what he carries to the office.

“I carry my laptop and I know exactly where to find what I need. I have two notebooks – one has all the detail I think I will revisit throughout the year. The other I just keep day-to-day notes which I leave behind when I’ve finished with it. I carry the AFL season guide which is invaluable with so much of what you need from fixtures, to players lists to historical data.

“I am fastidious in the way I prepare for everything. I need everything exactly the way I like it before I get to work. That is true of wherever I am.”

He updates his yearly notebook daily. “The workload is significant, but how I have it set up is the best way to do it. You live the footy season.”

Tim Hodges produced all of the nightly shows when AFL 360 moved to four nights a week. “I worked with Tim previously at Network Ten and I know him well,” said Whateley. “He is absolutely dedicated and fiercely loyal to the show. The planning is so critical for our show and we can’t live day-to-day without planning for the week, a fortnight and also a longer view over a month. We then need to be nimble enough to cover the story of the day when it breaks. Tim has all of those skills – he has a great news sense, his organisation is outstanding and he deals really well with people within clubs.

“We first talk at 9.30am and then again at 12.30pm. I arrive at Fox Footy about 3.30pm and we put the show in the order we want and work on the specific topics worth exploring.

“Tim has another producer working with him called Sam Daddo which is where people new to television start before they graduate through the ranks. All of the other people who had had that role are now producing programs – including Thomas Dullard who produces Fox Footy’s Open Mike and League Teams.”

Whateley also wanted to pay tribute to the program’s editor. “One of the tricks of the show is the packages that cover all sorts of subjects and themes. We have only ever had two editors on the show – Scott Edwards first and Daniel North now – and they are both superb creative talents.”