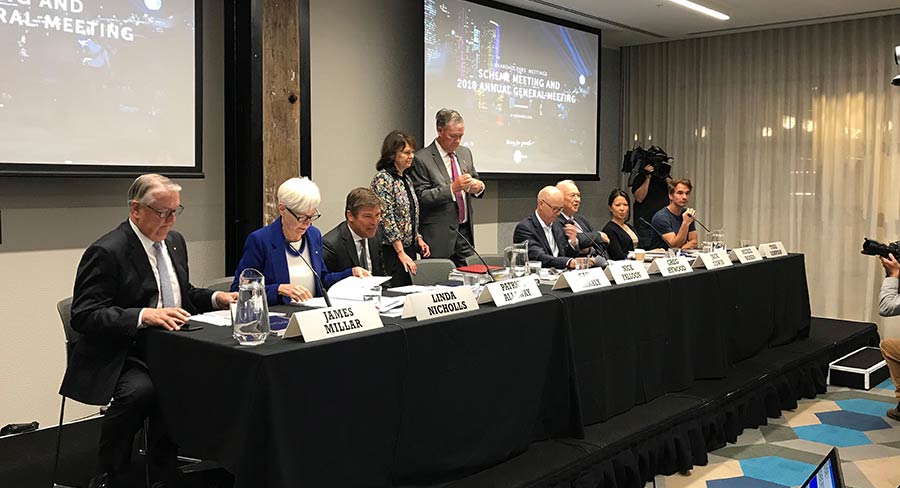 “A landmark day, all our teams should be very proud”

• Hugh Marks witnesses the final public board meeting
• Directors and chairman re-elected for…16 days!
• Shareholders slam secrecy surrounding executive salaries
• Questions regarding lack of print and radio experience at Nine
• Falloon on Antony Catalano: “I hesitate to call it a proposal”
• Hywood: “A landmark day, all our teams should be very proud” In a brief shareholder meeting this morning at the Sydney offices of Domain, the fate of Fairfax Media was sealed, with 81.49% of shareholders voting in favour of the merger with Nine Entertainment Co. Although branded a merger, the split of the company gives Nine 51% equity in the new business and control.

There was a sombre mood in the Domain café area as shareholders and a bigger-than-usual media pack waited to be let into the meeting room.

The last-minute attempt by former Fairfax-Domain executive Antony Calalano to prevent the merger came to nothing. Inside the meeting chairman Nick Falloon said the Fairfax Media board met early Monday morning and decided that it was not a proposal at all and the board would continue to advocate the merger with each of the board members directing their vote for their shareholdings to a yes.

The Fairfax Media board is an impressive beast with all the celebrity members sitting to the right of the stage – CEO Greg Hywood, investor Jack Cowan, US publisher Mickie Rosen (also president of Tribune Publishing) and ad agency exec-turned-TV host Todd Sampson.

The crowd was made of lone wolf shareholders, always ready to throw in a troublesome question, fund managers, media and, sitting quietly in the centre of the room, the next CEO to run the Fairfax business, Nine CEO Hugh Marks, with his communications manager Vic Buchan.

Falloon outlined how the morning would work. Once the vote on the merger had been completed and, if passed, the Federal Court would sign off on the merger on November 27. Fairfax Media shares would then be suspended from November 28 and then would start trading again as part of Nine Entertainment Co on December 10.

Questions from the floor included Aurora Funds Management asking about the declining share prices. Falloon explained how the NEC and FXJ stock had been tied together since the deal was announced. He also pointed out how many other media companies, in Australia and internationally, had seen their stock prices tumble in the past couple of months. He singled out in particular Seven West Media. Asked about any other proposals in addition to Catalano’s, Falloon said no, at the same time making plain it was not really a proposal.

The Australian Shareholders Associations (ASA) asked about management experience at Nine, wondering how they might go without any direct experience of running wither print or radio assets. “How will this enable them to turnaround Fairfax?” Falloon didn’t correct the questioner that Fairfax was not really in need of a turnaround, but he did note that in the past Nine did have radio assets.

The ASA also asked about the chief executive’s salary, noting Fairfax was only one of two companies (Harvey Norman was the other) where they had been unable to find the exact details the annual salary either from the annual report or follow up discussions.

Lone wolf questions came from former film critic at The Age Jim Schembri who was making the most of the opportunity as he fired off a series of questions from the second row. He asked about the future autonomy of the newspaper brands and in particular The Age. Chairman Falloon noted again this was the best possible result for both shareholders and staff, and noted Nine has endorsed the charter of independence at Fairfax Media.

One agitated shareholder asked about errors in the newspaper, and another complained of left wing bias. He moved to The Daily Telegraph four years ago and had been very happy with that product.

When it came time to vote most of the work had ben done in advance with major shareholders handing in their intention before the public meeting. However those who chose to vote today did so by handheld electronic devices and there was a moment of theatre as people waited for the vote to appear on the screen. A majority of 81.49% said yes, well over the required 75%.

As the shareholder meeting regarding the Nine merger ended, Hugh Marks approached the stage and shook hands with some of the directors.

Marks then didn’t stay for the last-ever Fairfax Media AGM. On his way out he initially declined media interviews, but was persuaded to make a brief comment on the street outside.

To Mediaweek and others, Marks said: “As we have said all along there is strategic merit in putting the two businesses together and a lot of shareholders understand that. It is great to get the vote today and I am very appreciative of the support of shareholders. We still have a court meeting to go.

“We understand we have a lot to do should that proceed as we hope and we will be focussed as that on a team. It is exciting and another step in what we are trying to do which is to create a media company of the future and not one of the past and shareholders will benefit.”

The subsequent Fairfax AGM ran for just over 30 minutes and sped through the formalities.

They included voting for the re-election of the chairman and two board members. Why exactly? Because it was a corporations law requirement they had to go through until the board is officially no longer in control – just 16 days.

The Fairfax Media board is not often in the one place and they will therefore hold a special retirement dinner on Monday night in Sydney.

During his shareholders address, Fairfax Media CEO Greg Hywood called it a landmark day and noted that while it was the end of the corporate identity, it was not for the individual mastheads and brands.

“We have had to make hard decisions,” said Hywood. He then ran through each of the divisions noting their current strengths and the key executives that got them there. It almost sounded like a reference for each of the division chiefs, maybe in case they need it.

Hywood noted he had been with Fairfax almost constantly since 1976, and CEO for eight years. Clearly moved by the disappearance of the company he has worked for most of his adult life, Hywood added “we provide a public good on a commercial level. I have worked with an incredible team – and they should all be very proud.”

As Hywood resumed his seat there was a round of very warn applause.