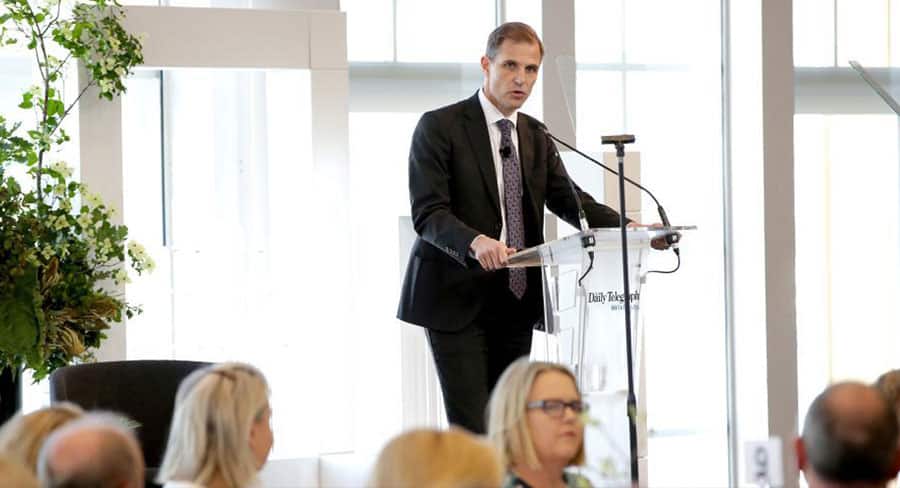 The editor of News Corp’s The Daily Telelgraph, Ben English, has been in the role for just on 12 months. Mediaweek last spoke to English just after he returned to the Sydney news brand, after last year’s Bradfield Oration, a key event the newspaper sponsors every year. This time we spoke with him after this year’s event last week.

English told us that it didn’t seem like he’d been running the newspaper for a year. “It’s 12 months and I feel like it takes probably that amount of time before you feel like you’re comfortably in the saddle and you’re comfortable with your team.”

English had worked the newspaper before as deputy editor and prior returning spent time editing others newspapers in the News Corp Australia network.

“News gave me a couple of roles editing great papers like The Townsville Bulletin and the Gold Coast Bulletin – that was a great grounding. The Telegraph is bigger because you’ve got stakeholders everywhere. I’ve got them upstairs, I’ve got them over in New York and of course, the number one stakeholders are our great readership.

However because the news brand has its biggest audience online, most people engaging with The Daily Telegraph don’t get to see that front page. Has English taken any steps to counter that?

“There are several strategies we are using around that. The main one is with newsletters. You can deliver great tone and attitude through through newsletters, with great personalisation. Equally, we’re doing more deep dive journalism. Even though we’ve got less reporters than we had 10 years ago, we’re partitioning off journos to do deeper dive journalism. That’s what consumers are demanding. We’re going to have to have a point of difference, otherwise, we’re commoditised and the game’s over. The audience so far is responding to that. We are investing a lot of money in specific projects, but the payback has been tremendous.” 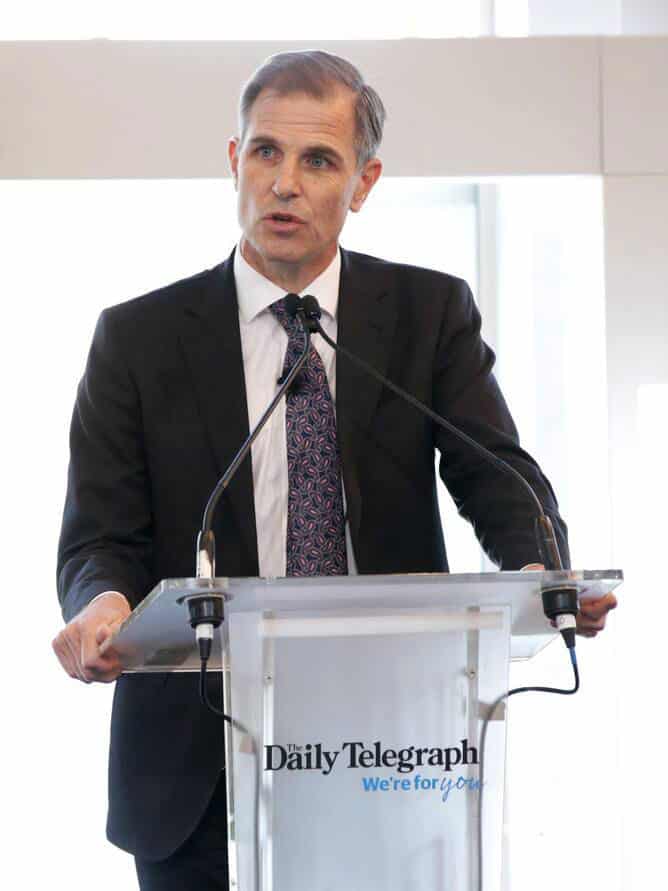 The theme at the 2019 Bradfield Oration, Sydney’s future, delivered by US geographer Joel Kotkin, seemed tailormade for the Telegraph and its strategy of reaching out to Sydneysiders everywhere. The paper is not about the inner-city, instead reaching out to audiences all over.

“We’re at an inflection point with the media where the media is increasingly reporting on media, on what politicians have to say and what think tanks have to say, and they and they have less resources to actually go out and talk to real people,” said English.

“That’s an opportunity for us. We still have enough reporters that we can get them out of the office and get on the streets and talk to real people. That allows us to cut through more than anything else. If we actually go the same way, as a lot of other media outlets, we will just get swallowed up.”

A clever use of reporters and group resources helped comprehensive coverage of the bushfires this month. English explained:

“It’s all about collaboration now. We’re fortunate to still have our News local network, and they feel very much part of the one team now. We were able to mobilise reporters in Newcastle and in the Illawarra who work for virtual local mastheads, who were reporting through them for us.

“The second thing was, whenever there’s a big event, journos just come into work. Even if they are on leave or just a day off – they all come in. I never cease to be astonished by the work ethic and the dedication when that happens. And that’s what happened this time. We had that deputy editor Gemma Jones come in, she had just began a holiday. She just came in and worked and we got a magazine out in 12 hours – 16 pages that normally should take a week was produced through this enormous work ethic the team has.”

In the recent News Corp results for Q1 of the new financial year, CEO Robert Thomson revealed how tough things were for the Australian newspapers. English is well aware how critical selling the news is to his brand’s business model.

“Consumer revenues, undoubtedly, are the key to our future,” said English. “The best thing that’s happened to us in recent times is for us to erect a paywall. What that has done has brought a forced discipline on us to be ruthlessly relevant for our readers and we’re seeing the results. We’re learning all the time. We’ve only had a paywall for four years. But the data that we’re getting is more sophisticated. It’s more informative, we’re getting greater insights. We now have a really well-paced product and we do breaking news really well. We’re also learning what time of day, day of week, how people want to consume information and how they want their stories told. We’re getting much better at telling stories in a more modern, dynamic, agile way.

“There’s a lot of trial and error. One of the benefits of being a global village is that we’re getting learnings pretty quickly from around the world. I just went on a study tour of Silicon Valley. It was a revelation to me some of the advances that have been made in data collection. It’s an enormous opportunity – people talk about the onslaught of journalism of the digital age, but it’s also liberated us, there’s a lot of stuff that we used to have to do manually that we don’t do any longer so now we can get out information more efficiently. Now the temptation is for us to dive into that and actually never leave our office and I think that would be a mistake, it’s got to be a combination.”

Reading News Corp Australia products now you realise how focused the business is on synergies within the group. There are regular links and promotions to other owned properties from Foxtel to Kayo to the various news outlets.

“The whole world is waking up to collaboration being beneficial,” said English.

“There is no doubt at times historically we were like a federation of warring states. Quite rightly so in that we were very competitive and very parochial. Now we’ve got to be smarter, we’ve got to work out where we can collaborate and where we can share content. One of our strongest points is our coverage of national affairs. Often the Telegraph sets the agenda with that, and you will frequently see content that is created in Sydney digested in Brisbane and Melbourne. At the same time, you can’t let go of being fiercely parochial and hyper local because that’s what people demand.”