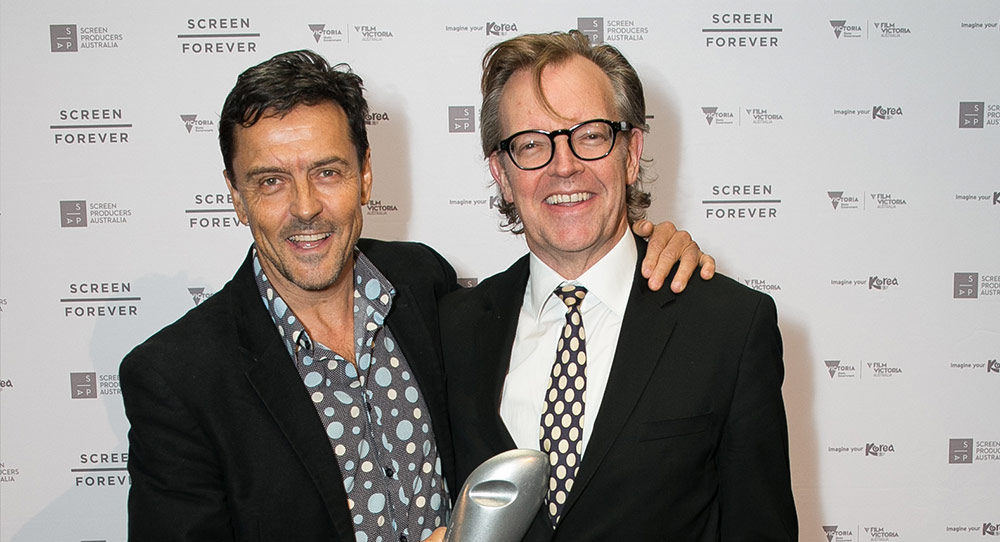 CJZ is the biggest remaining Australian indie production house after a raft of deals over the years has seen either investment or takeover of many local TV producers.

The most recent deal was the acquisition of Essential Media by Canadian-based Kew Media.

CJZ had two of the three most-watched non-news programs on the ABC last week – Gruen and Julia Zemiro’s Home Delivery – which both managed to outrate the broadcaster’s royal wedding coverage.

CJZ is also the home of the Network Ten evergreen Bondi Rescue, now in its 13th season.

Mediaweek visited the Sydney headquarters of CJZ this week to talk with co-owners Michael Cordell and Nick Murray.

“We do feel like the last man standing,” Cordell told Mediaweek when discussing investment in the production sector by overseas companies. He said it was understandable why so many production companies have either accepted equity stakes or sold 100% of the business. “You can see the benefits for some production companies in having a big brother or sister overseas. Having someone who can bankroll a big drama production can make a big difference.”

Cordell noted they have a big drama project that would be commissioned in a flash if they could secure funding from a parent company. “We remain proud of the fact we are locally owned.”

Murray said they have had a few approaches to sell in recent years. “For a whole of reasons we have said ‘No’ and we don’t regret that.”

As to how they manage extra capital when need, Murray explained: “We have a line of credit for when we need it that is secured against our houses.”

While the two producers work together on special one-offs, they generally look after separate programs on their slate to nurture them.

“It is not just us,” said Murray, explaining their swelling executive ranks. “Matt Campbell is here as CEO and he has a couple of projects he is shepherding along. Toni Malone is our director of production and she has projects to look after too.”

Others in the company include Damian Davis (head of entertainment and comedy) and producers Rick McPhee and Polly Connolly.

“For the size we are at now it can’t just be Michael and I,” said Murray. Cordell added: “The great thing about the size we are at now is that we are an umbrella for a lot of great people with great ideas. The business doesn’t need either my or Nick’s attention on absolutely everything. It is very exciting to see ideas emerge, grow, develop and get financed and produced sometimes without too much involvement from either of us.”

Murray: “The business tends to make about 12 series a year in Australia and about the same in New Zealand. That is big and is a lot of effort from all of us. That enables us to spread across different genres and have a number of different clients. That helps when it comes to managing risk.

“If a particular broadcaster has a bad year, or spends too much on sports rights, we have shows also on other networks in case someone pulls back.

“Our key focus is that if a show gets cancelled then we can look after the people working on it and try to place them elsewhere in the company.

“This business is about people and our model here is having a good group of internal producers working on production and development. That helps us stay out of the freelance marketplace bidding against other producers for people to make their shows.”

Cordell didn’t think there was any less risk in making TV these days when there used to be.

“The risk for us is our houses. [Laughs] We have a massive overhead, which focuses your mind. When we sign off on the payroll every week, that is a sobering experience. The whole TV environment is being disrupted. Shows that you would definitely have got up five years ago are impossible to get up now.”

The producers don’t believe a smaller independent producer is likely to get up a shiny floor show for 7.30pm on a commercial network.

“We would like to,” said Cordell with a grin.

Murray: “The networks are unlikely to commission a new original Australian idea for a multi-night show at 7.30pm. The shows that do get commissioned for those slots tend to come from the international companies operating here. “That doesn’t guarantee they will get up though. The thing that I worry about is what happens to people with great original ideas here. A project that now goes through Screen Australia as a format attracts more money for the production company than for an original Australian idea – up to three times as much.”

CJZ and Wil Anderson continue to talk with international broadcasters about a format sale for Gruen. The show very nearly sealed a deal in the UK but, after making a pilot, the BBC decided not to proceed.

As Anderson confirmed to Mediaweek last year, discussions have been taking place with a number of streaming companies, including Amazon and Netflix.

Murray: “The people in the UK didn’t listen to everything we were saying. [Former Gruen producer] Jon Casimir recommended not to put comedians on the panel because it’s not that kind of show. We said put experts on the panel, but it was produced there as a classic panel show with a host and four comedians.

“It was an interesting thing to learn that we wouldn’t let anyone do it again without some firmer control.”

For the US market, a streaming service makes more sense because it is not advertising dependent, and criticism of advertising would likely ruffle fewer feathers.

“There is nothing signed on the dotted line yet, but there is still good interest there in Gruen.”

Murray and Cordell noted Gruen is more relevant than ever.

Despite Wil Anderson spending more time in Australia because of his Triple M Melbourne commitment, Murray indicated it would be unlikely they would ever do two full seasons of the show.

Listen to the complete Mediaweek podcast to hear Cordell and Murray talk about their other big hits including Bondi Rescue, Julia Zemiro’s Home Delivery and The Checkout.