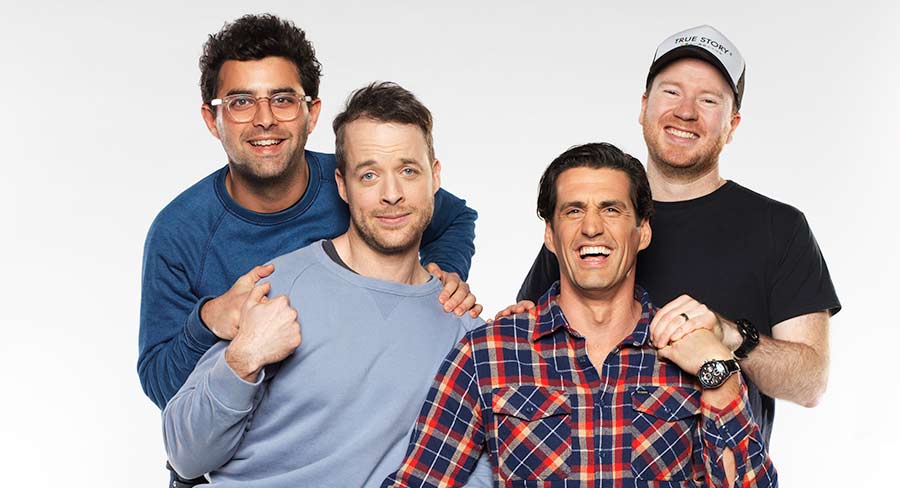 One of the four founding partners of Radio Karate, Tim Bartley has been a key ingredient in the success of Hamish and Andy on the TV screen.

The talented director and producer has just delivered all of the episodes of season two of True Story with Hamish & Andy to Nine. He worked as producer, executive producer and he directed six of the 10 episodes.

He’s been living and breathing the show for some time.

“Season one rolled straight into season two essentially,” he told Mediaweek. “A show like this has a long gestation. It takes some time to put together due to the research phase, followed by writing before the show then goes into a regular drama production schedule.” Even though Radio Karate is a boutique production business with one show in production at any one time, Bartley calculated it had over 600 cast and crew on its books on season two at different times.

“Every episode feels like a little film, which was always one of our aims from the start.”

Sourcing the true stories is the most challenging part of the process.

“We could go four weeks and not find a single story we thought would work. Then we’d have a meeting where suddenly the research producers would find three in one day. In a way it was like a terrifying rollercoaster. Hamish and Andy with storyteller Carol in episode one

The culling process was huge!

“We were looking for a magical top 20. We overshoot a little bit in the studio as we finally end up with the best 10 we will use for the series.”

None of the stories submitted for season one was held over for season two. That could happen again if there is a season three, although Bartley admitted there are a couple of unused stories they think are still pretty good.

“One of them was set on a navy submarine in the 70s, which was a fantastic story, but we had to be realistic about what we could recreate in three and a half days of shooting for the episode.”

Each member of Radio Karate has their own favourites, with Bartley admitting he is particularly fond of the episodes he directed. “So much emotional energy gets poured in and when it comes off it feels pretty good. The thing about this show is that you could show three different episodes to three different people and they could all have a different favourite.”

Bartley said not to miss episode four, which includes an action scene. “It was so much fun to direct. We were out on a farm in the middle of the night with a truck, Steadicam and huge lights. It was as terrifying as it was exciting in case it all went wrong.”

Bartley feels he is a much better director after the two seasons. “We were pretty green with scripted content before we started. I was lucky enough to work on Little Lunch, the kids series from Robyn Butler and Wayne Hope, and they gave me a chance without having ever really directed.

“I did that the year before True Story started and to be able to learn from Robyn and Wayne was an amazing experience and it boosted my confidence.”

Hope was one of the directors on season one of True Story.

“There is a great production community in Melbourne. Apart from a couple of actors from out of state, most of the team were locals.”

While Hamish and Andy have various projects on the go, Bartley admitted the series had been all-encompassing for the past two and a half years. “Full-time and a half,” he said. “I am about to go and reintroduce myself to my family.”

There are no immediate plans for what is next. Radio Karate used to be the event specialist with special projects all around the world.

“Those things are too much fun,” he said. “But maybe that was a young person’s game. We’d love to do it, but we remember the physical toll. Could we still run to the top of a volcano with all the camera gear on our backs?”