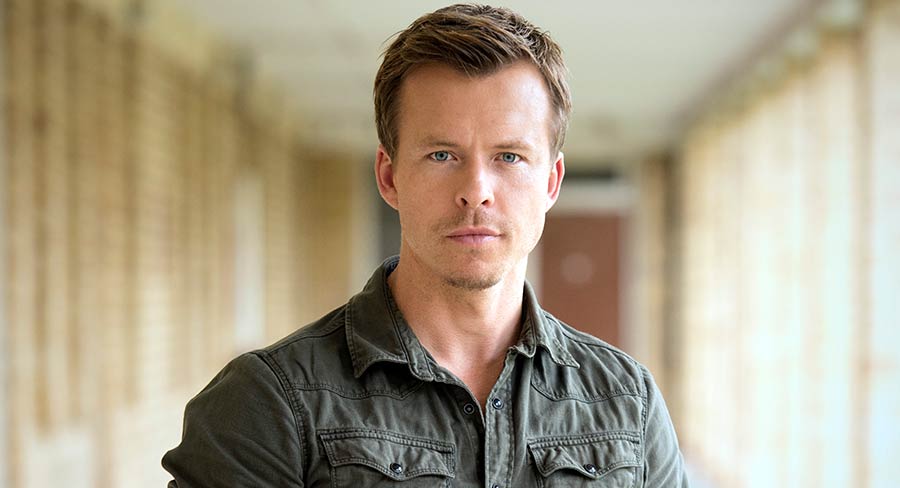 • Bite Club is screening on Nine and 9Now.

There is expectation that Nine’s new Playmaker Media police drama Bite Club will find a loyal following when it launches this week. Part of the interest is building around the talented cast, which includes Lost and Lord Of The Rings star Dominic Monaghan plus Deborah Mailman, Damian Walshe-Howling and Ash Ricardo.

Another reason to watch is former star of Janet King/Crownies, Underworld: Chopper and Bikie Wars, Todd Lasance. More recently he has been working in the US, scoring regular roles on US television series The Vampire Diaries and The Flash, both for CW Network. In Bite Club he plays Detective Constable Dan Cooper. Playmaker and Nine pitched the Bite Club role to Lasance, who was attracted by the character and the show’s premise. Speaking to Mediaweek from Los Angeles, Lasance said: “To be honest with you, everything is driven by character for me. To move back home [for a role] I am essentially moving countries again and taking my family with me, which can be a big procedure.

“This role was literally a no brainer for me as far as the character, the team involved and the story. I jumped on board within a week. I was able to meet with Nine and the team including the director and we workshopped the tone of the series and what I wanted to bring to the character.

“They started to then build the cast and I was surrounded by some of the best people we have in the country. I have always had an interest in the police force and the military and it was right up my alley.”

Lasance said he hopes viewers support the new show and stick with it. “It is a show that builds during the series. If people get in early there is a huge payoff.”

When asked if he had watched much of the finished product, Lasance said: “I have seen the whole thing, which is why I am so passionate about it. The producers have gone for something quite dark and edgy and it gets quite violent too. The intensity builds from episode one and you become aware of the imminent danger.”

As to fellow cast members, Lasance said he had met Robert Mammone a few times and had also worked with Marny Kennedy, who were both also in Janet King. “I had not met either Ash or Dominic. I didn’t know Deb Mailman before either.

“The whole cast became a close family within two weeks after we bonded immediately. We all wanted to work hard and produce the best product.”

When speaking about Monaghan, Lasance said: “He was such an interesting choice for the role because he has a perfect blend of edge and charisma, but also something about him that is not just quite right.” Because of the involvement of Sony Pictures Television, which owns the production house Playmaker Media, Lasance said there were expected to be sales to territories outside of Australia. “That made us all super-excited and I got to meet some US Sony Pictures Television executives, who told me there has been interest from some big networks.”

Home is Los Angeles these days for Lasance. “I use the term home loosely for Los Angeles. For what I want to do I need to get established here. The business is so cut-throat with so many auditions going on and so many casting directors. It is almost like you have to stay in front of these people to keep your momentum going.”

Lasance explained if you leave Hollywood you risk being overlooked because you are not on call at short notice.

“I miss the hell out of Australia, but to get to the next step you need to be based here and make the sacrifice. This is where the opportunities are and there are some amazing things that can be offered.”

Lasance said it was not unusual to get a late afternoon call for an audition the following morning. “That might be the lead for a new series and, if you get it, it would literally change your life forever. You have to be on the ground to take those opportunities. Everyone can send videos, but you never know if they are going to watch them. If you are in the room though, you get to speak to the casting director.”

As to how much getting a major role is dependent on having talent or the right connections, Lasance told Mediaweek: “As much as it hurts me to say it, it sometimes comes down to just social media bull crap. That is such a shame. You do need to deliver in the audition, but it is also about connections. I can tell you though that if my social media following was larger then so would be my career in the US. A lot of people are given jobs based on the size of their social media following.”

Lasance told Mediaweek that short-run series are very attractive to actors. “It usually means everything is condensed including the writing, which means they don’t have to stretch out storylines.

“The good thing about Bite Club was that it was a short, condensed, hard-hitting season that didn’t run for 22-episodes. We got to do an intense 12-week shooting period and then potentially look at other projects.”

Lasance admitted he hopes to get more work on feature films, which would allow him to focus on one particular character for three months. “That is my dream. Other actors are happy to sit on a long-running series and that is OK too.”

The Bite Club star admitted it was a good time to be an actor in Hollywood. “There is so much being made and the creative level has really stepped up. I am watching Castle Rock at the moment and that is just phenomenal – the budget, the scale and the performances and the quality of the work. The competition between the streaming platforms means the quality is always being improved and that’s where the FTA networks are also having to step up to if they want to keep their viewers.”

Lasance said the big US drama series franchises are expected to drop from 22 episodes annually down to 12 to 14. “Although there is more opportunity, the big stars are switching to TV because the content is so good.”

Bite Club is screening on Nine and 9Now.