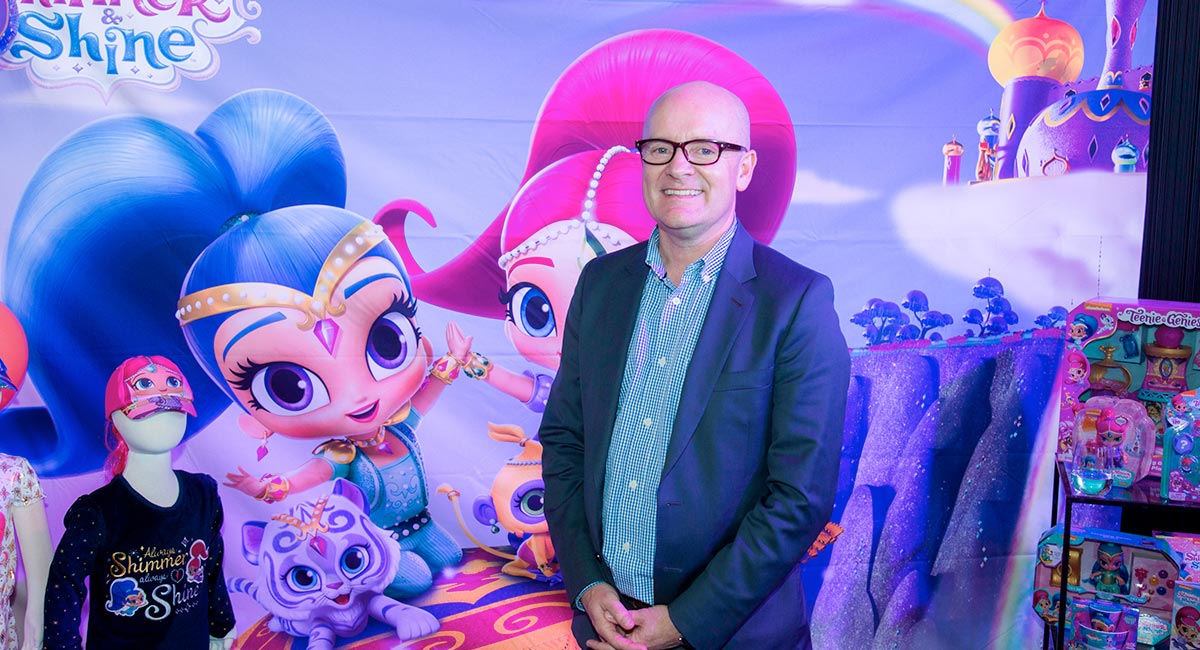 Melbourne is a place where a lot of the toy licensees and retailers are based. In March every year the city is host to the Toy Hobby & Licensing Fair where two of the major sponsors are the media companies Nickelodeon and Entertainment One.

As Ben Richardson, general manager & senior vice president, Viacom International Media Networks Australia, explained to Mediaweek, it is the perfect place for the channel and Viacom to hold its annual upfront.

Revues from Nickelodeon franchise licensees are an important revenue stream for the kids multiplatform media brand, while toy manufactures are amongst its biggest advertisers.

“It is very competitive to get shelf space and we want retailers to hear our story,” said Richardson just moments before he presented in a South Melbourne function space, a short trip away from the Toy Fair exhibition halls.

“We get a captive audience in a room, we show them sizzle reels, they hear from Viacom executives from around the world and we give them a lot of detail and launch information.

“Events like this help keep our momentum with retailers and it has definitely improved our presence in store.”

Richardson noted the changing kids TV model, yet added: “We still have Viacom kids content on Nine. The FTA broadcasters are definitely pushing back on kids TV quotas, but from where we sit there is a significant opportunity from them to invest in IP that can go global.

“If kids TV content quotas do change I hope networks will still realise the importance of kids audiences. Networks have to bring younger audiences through their business as well as catering to older viewers.”

As with other broadcasters now, TV ratings are just one of the metrics used to measure audiences and engagement.

“Although having an immediate ratings hit is nice, we are more about long-haul success and we have a very different model to broadcasters.

“In the last few years Nick Jr has been a real powerhouse – pre-school is really strong across all platforms. Having a property like PAW Patrol is what I call the One Direction of pre-school. It sells tickets and attracts eyeballs to all our screens… it works everywhere.

“If you look at JoJo Siwa we identified her as someone with a strong appeal to a demographic of tween girls where we didn’t have any IP in that space. She arrived fully formed with a massive, massive fan base. She signed on to be an actor-performer-presenter in our shows.” Viacom signed Siwa after she rose to fame off the back of Dance Moms before becoming a social media star via YouTube. The ultimate accessory for her millions of fans is an official JoJo Siwa hair bow.

Richardson explained Viacom has a global focus: “We have a six-brand strategy and over the past six months we have seen the business become more global. Nickelodeon has always been very global.”

The other brands all have a presence of varying degrees in Australia and New Zealand: Nick Jr, BET, Comedy Central, MTV and Spike (now rebranded as Paramount in the US).

“Apart from Nickelodeon, the other brands used to be somewhat separate businesses. They had slightly different teams and strategies.

“MTV has had a couple of months of really strong growth and they have gone back to the basics of what they do very well – really strong reality and big music events. The spinoffs of Jersey Shore have been such big hits around the world – Geordie Shore [UK] plus Spanish and Polish versions. MTV realised maybe they had given up a little too quickly on the Jersey franchise.

“There is a Jersey Shore reunion show going live around the world, while Jersey Shore itself is up to season 16.

“Floribama Shore – a Shore-like series shot in the Florida region – is doing very well for us in Australia.

“MTV is probably making a little less scripted than it used to, but really doubling down on reality.

“Teen Mom is another long-standing reality series that continues to do very well for us. It is consistently our #1 show. The series has stayed on the Sunday schedule, which has been helped by a loyal audience. As a network we don’t move things around too much.”

Of the other brands in this territory, Richardson said: “BET is one I am looking at really closely and trying to do more in Australia.

“We have a D2C [direct to consumer] app in Australia and this market is consistently #1 or #2 internationally. Hip hop/RnB is the dominant genre in Australia and we have had a lot of success with Southern Cross Austereo around their RnB Fridays.”

BET is a paid app which sells for $6.

“We also have Spike in Australia and sitting under that we have Bellator and we have been running their mixed martial arts (MMA) events on the Spike channel, which is on Fetch. I would love to be able to bring an event out to Australia.

“Spike in the US has become the Paramount network. For now we are staying with the Spike brand in Australia. The programming on Spike goes from MMA to Lip Sync Battle to tattoo shows.

“Paramount in the US launched with WACO, they have the Heathers re-boot and they have Catch-22, which George Clooney produces, directs and stars in.

“Comedy Central is doing very well for us in New Zealand where it sits on the Sky platform. It is carried on Fetch in Australia and we also have an output deal with Foxtel and a lot of the content is on Stan. In the last 18 months we have really invested in digital and we have produced a lot of shorts.”

Richardson has high hopes for the brand here. “With Comedy Central we see the opportunity to do more events here. We are looking for new local comics who might fit our brand – there are big established management groups and comedians, but who are the new comics? We definitely want to be broader as a comedy brand.

For the future, Viacom Networks in this part of the world has a model that sets it up for the bumps ahead that all media is bracing for.

“We are not just an advertising-dependent digital publishing group, but we have many media touchpoints, which allows us to be different to pure ad-supported publishers,” said Richardson.

“Kids and MTV have been very strong for us. We have a very diverse network and we can go on and off channel. The catch-up services are becoming very strong when you look at the Foxtel numbers. “We can’t effectively monetise those audiences yet. We will continue to customise the content we deliver.”

With channels on the Foxtel platform, Richardson is positive about Foxtel’s future.

Richardson said he was happy with the messages coming out of Foxtel about offering subscribers fewer but stronger brands. “That is like the Viacom global strategy – let’s focus on key brands and let’s make sure we prioritise those brands and increase investment in content for those brands.

“Foxtel is saying there are a lot of distractions out there and how can they have a simpler product. We are excited about Patrick Delany joining and I have had a long working relationship with him. He is a dynamic presence and he is not going to die wondering. He will try lots of things, but in partnership with us. He’s been a longtime supporter of our brands.

“We like working with Foxtel because they are a house of brands. We think it is really important to keep those brands together instead of disaggregating them.

“I am excited to see what Foxtel comes up with next – it could be a very dynamic year for them.”