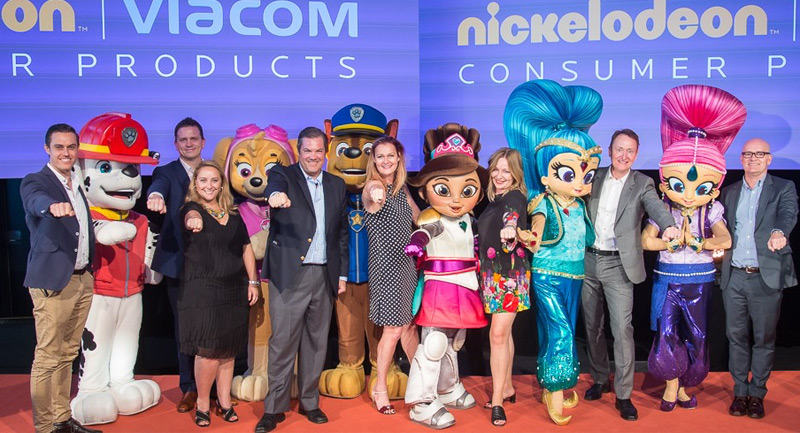 Nickelodeon Viacom Consumer Products (NVCP) showcased a jam-packed property portfolio to key retailers and licensees at its annual Australian upfront event last night in Melbourne. The presentation emphasised the brand’s strong positioning across all areas of the business including on-air, on-the-ground, on digital and at retail.

The superstar lineup of six Viacom executives from the USA, Europe and Australia shared hosting duties to talk about the coming year.

Senior vice president international consumer products Mark Kingston spoke first and said: “Following the amazing success we’re having with our content, we are continuously looking forward at ways to grow the Nickelodeon brand beyond television. We’re doing this with our most global outlook ever, which allows us to accelerate our speed to market on new franchises and use the scale of Viacom to provide even more creative solutions and resources to support all our international regions.”

The upfront showcased Nickelodeon Australia and New Zealand’s success over the past 12 months and the strong consumer products portfolio currently dominating shelves at retail. PAW Patrol continues to break records globally ensuring it remains the #1 pre-school property with kids everywhere after winning the 2018 Licensed Pre-School Property of the Year at the Australian Toy Association’s Product of the Year Awards on Sunday night. Following a year in the Australian market, Rusty Rivets has been seeing phenomenal success both on-air and in retail. The series introduces pre-schoolers to the maker movement and the Spin Master range of toys allows kids to replicate the building techniques they’ve seen on the show. 2018 will be another big year for Rusty Rivets with more new episodes and an expanded licensing program hitting retail from June. Kingston said the Nickelodeon network would be screening 700 episodes of new and returning series this year.

Ben Cox, vice president and general manager of Nickelodeon Australia and New Zealand, presented on the success of the brand within the Australian and New Zealand markets, including the phenomenal growth of the brand beyond linear television. “As the strongest kids TV brand in Australia, we pride ourselves on continuing to create immersive real-world experiences for our audiences, expanding the brand’s footprint far beyond the television screen. 2017 saw brand partnerships with P&O, Victoria’s Falls Creek, Cricket Australia and more. In 2018 we’ll continue to strengthen these existing relationships while adding new experiences for our fans.”

Claire O’Connor, vice president, consumer products and retail marketing Asia Pacific, highlighted that 2018 will be an even bigger year for the brand. “Nickelodeon currently has the largest and strongest slate of pre-school programming we have ever seen. The popularity of our properties on Nick Jr. in Australia and New Zealand has helped drive incredible growth for our consumer products business. In Australia, in the next 18 months we’ll be launching three brand new shows with consumer products ranges – 2018 is going to be another huge year for our brands.

2018 will bring the launch of two brand new pre-school properties to Nick Jr., Sunny Day and Top Wing. Pre-schoolers join Sunny, a 10-year-old master hairstylist and entrepreneur, as she goes on exciting new adventures in her seaside town of Friendly Falls in Sunny Day.

Top Wing follows a team of eager young birds as they work together to help their island community, go on amazing adventures and earn their wings as full-feathered rescue birds. There will be a new product line inspired by the show debuting at retail in the US this year, followed by international markets, including Australia, next year.

MTV continued its engagement with millennial fans through live events, brand integrations and consumer product lines showcasing a brand that resonates more than ever with Australians. Ben Richardson, senior vice president and general manager of Viacom International Media Networks Australia and New Zealand, highlighted: “2017 was a huge year for MTV Australia and New Zealand, and our goals for the MTV consumer products business in 2018 are all about deepening the relationship with our audience by creating on-trend products across fashion, technology and fitness.”

Richardson spoke about the strength of the Nickelodeon retro brands and the power of JoJo Silva. “You can’t but help catch her infectious positivity.” He also spoke about merchandising JoJo bows (10m+ sold!), how Nickelodeon is sliming the world and the success of the MTV Beats & Eats initiative.

Together with Haven Licensing, NVCP concluded the evening with a special presentation recognising key retailers and licensees.