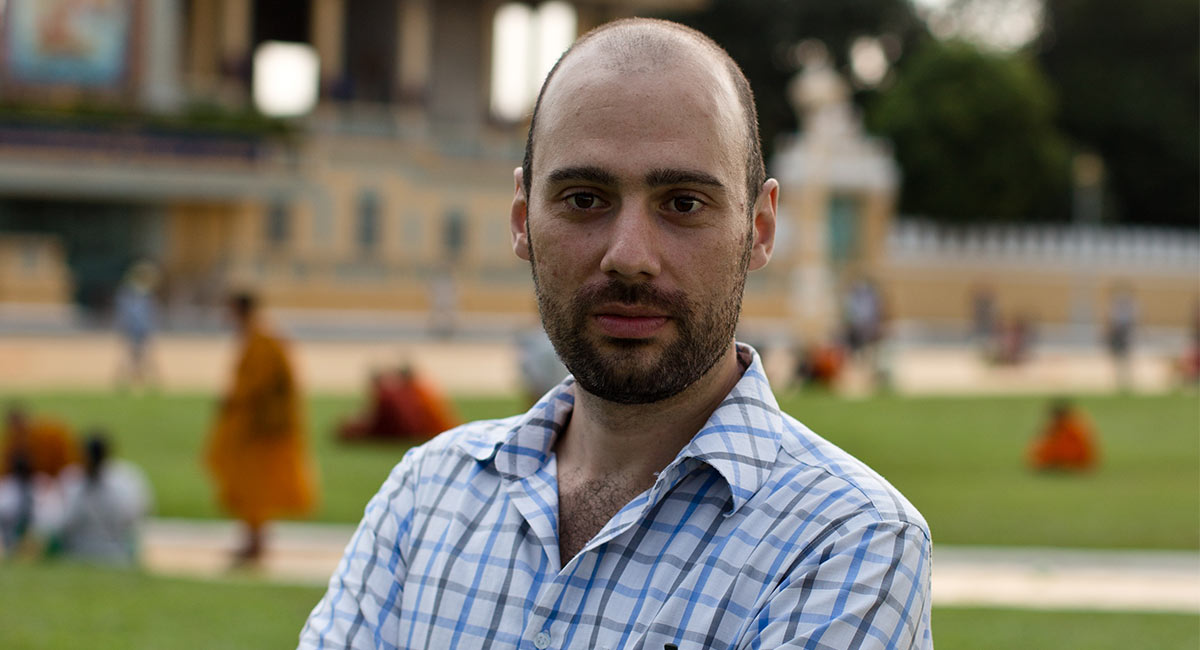 Strangio was initially drawn to Southeast Asia after holidaying in Vietnam and Laos in 2003.

Just over 10 years out of Melbourne Uni, journalist, author and expert commentator Sebastian Strangio has carved out a thriving niche as a Southeast Asian media maven.

“Since 2008 I have established myself as a leading writer on events in the region, and my articles have appeared in publications including Foreign Policy, The Atlantic, The New York Times, The Economist, Nikkei Asian Review, Al Jazeera, Forbes Asia, The Diplomat, etc,” he says on LinkedIn.

“I’m also the author of the acclaimed book Hun Sen’s Cambodia (Yale University Press, 2014), an examination of that country’s history since the fall of the Khmer Rouge regime in 1979.” He’s also a leading commentator on politics in Cambodia and Myanmar, and his views have been quoted by major media outlets.

At Melbourne University, Strangio was one of four co-editors of Farrago, together with Jessica Friedmann, now an author and editor in Canberra, Jonathan Brent, and Gillian Terzis, now both content strategists at Facebook in San Francisco.

Having finished university in December 2007, Strangio headed to Cambodia and in March 2008 signed on at the Phnom Penh Post as sub-editor and reporter, then became deputy news editor in 2010, then left the Post to go freelance in 2011.

He also wrote the Hun Sen book that was published in 2014 by Yale University and was reviewed by many of the majors, including The Wall Street Journal, which said, “It’s a remarkably well-researched, astonishing portrayal of Cambodia’s own Fidel Castro, a folksy, self-styled godfather and his thugocracy.”

Strangio was initially drawn to Southeast Asia after holidaying in Vietnam and Laos in 2003.

“I became interested in Indochina and began reading a lot of about it,” he told Mediaweek. “That drew me into the subject. Cambodia recommended itself because, unlike Vietnam and Laos, it had a free English-language press and hence greater opportunities for aspiring young journalists.

“During my first trip to Cambodia in 2006, I had seen the Phnom Penh Post on sale and later saw it cited frequently in books about the Cambodia of the 1990s. In my mind it was surrounded by an air of adventure and exoticism, so I set my sights on it.”

At the end of 2007, Strangio called Michael Hayes, then the owner of the Post, asking for an intern job and getting one of Hayes’s famous lines: “Sure, but I can’t pay you.”

Strangio says, “I was fine with that. In the end it worked out in my favor. A few months prior to my arrival, Michael had sold the paper to new owners, who were readying to relaunch it as a daily newspaper. There were plenty of jobs going, and I found myself in the right place at the right time.”

While Strangio thrived in the job at the Post for three and a half years, freelance called.

“After a few years in the churn of the daily news cycle I had become tired, and was eager to get out and stretch my wings as a journalist,” he says. “In my last year at the Post, I had made reporting trips to Bangladesh and Thailand, which whetted my appetite for the freedom of freelancing.

“After a year or so of freelancing, I planned to pursue work with a newspaper, or with one of the wire services, and even interviewed for a couple of positions. But I was reluctant to forego freelancing, which was enabling me to read and travel widely on my own schedule.

“By the time I started seriously seeking out a full-time position, I was offered the contract to write Hun Sen’s Cambodia, which took me in a new direction.

“My vague journalistic ambition had always been to write a book, so I leapt at the opportunity to submit a proposal and, when that was accepted, eagerly threw myself into research and writing.”

Since September 2016 he’s been research affiliate at the Carolina Asia Center at the University of North Carolina, focusing on contemporary Southeast Asian politics and the political and economic effects of China’s rise in the region.

There’s also a new book in the offing, again to be published by Yale and tentatively titled In China’s Shadow, which will look at the ways Chinese power is transforming Southeast Asia.

In August, he will move back to Southeast Asia, to Chiang Mai, Thailand with his family, to finish researching and writing the book. No doubt, more freelance journalism will emerge.

Summing up his journalism career, Strangio ducks the tag of meteoric rise.

“I think meteoric overstates it a little, but I suppose I have been lucky in my career so far,” he says. “Being a journalist involves a knack for being in the right place at the right time, something that applies equally whether one is hunting down a story or advancing one’s career.”