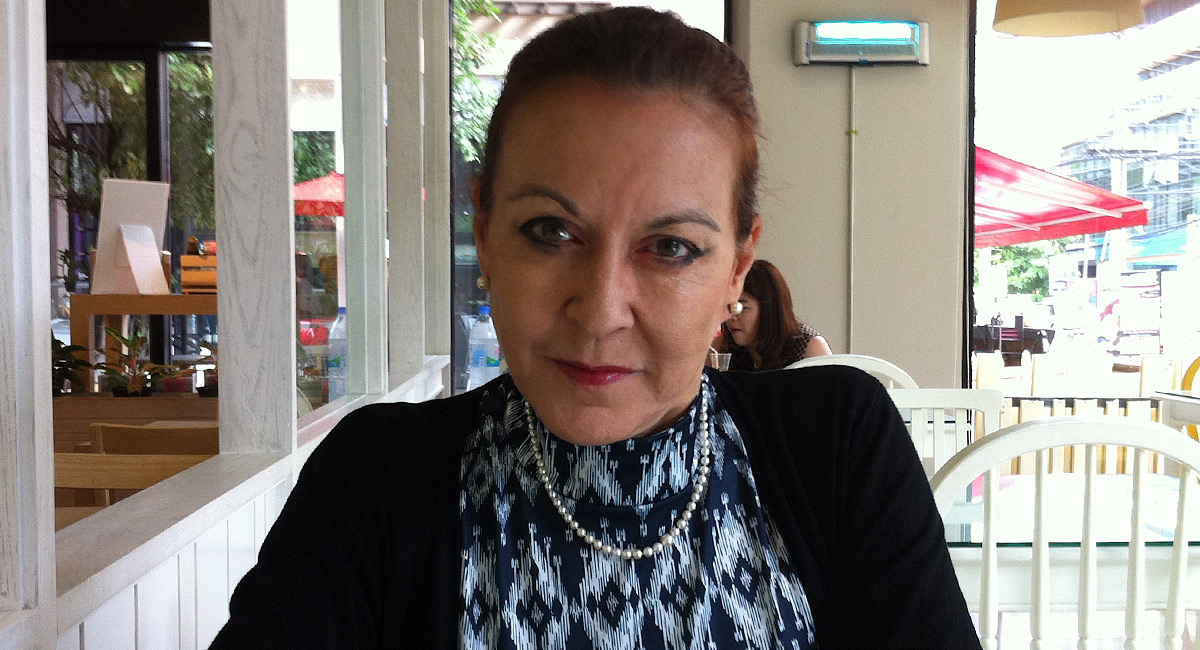 ‘I guess as a veteran ‘hackette’ I do miss print media’

Perhaps it’s typical of the life of self-described “hackette” Gwen Robinson – chief editor of Nikkei Asian Review – that she gave Mediaweek her career details while on the hop between Tokyo, Bangkok, Chiang Mai and the Myanmar backblocks.

Robinson – also senior fellow at the Institute of Security and International Studies at Thailand’s Chulalongkorn University – was born in Japan to a Japanese mother and an Australian father, both journalists. At age six she moved with her family to Australia, where she was educated in Sydney and later, in Canberra.

Her published bios mostly deal with her career beginning in the 1990s, when she was an editor-writer at the Nikkei Weekly in Tokyo, then North Asia correspondent for The Times of London. From 1995 to 2013, she was an editor and correspondent at the Financial Times, including bureau postings in Japan, Southeast Asian, New York and Washington, and an eight-year stint in the FT’s London headquarters, as the paper’s Comment editor and news editor of FT.com .

But the 1980s were her formative years, and she tells Mediaweek that early in the decade she was the youngest writer on the now-defunct National Times under Brian Toohey‘s editorship.

“I had gained a DFAT grant for young Aussie journalists to familiarise themselves with ASEAN, and went around the region in 1984,” she says. “I then convinced the National Times to send me to Manila on a modest retainer in 1985, and covered the 1986 downfall of Marcos.”

When the National Times closed, Gwen stayed in the region, freelancing.

“I then moved briefly back to Sydney,” she says, “worked for a while with Four Corners, and also ABC generally, and then to Bangkok in late 1987 where I worked for numerous publications including the London Observer, Canberra Times, Asia Pacific Defence Reporter, San Francisco Chronicle and Economist Intelligence Unit – I was a regular correspondent for its Inside Indochina newsletter, and covered the opening up of Vietnam and Cambodia.”

So what was a young Australian journalist doing hacking – successfully – on the Asian beat?

“I suppose with my mixed east-west heritage, I had a natural attraction to Asia,” she said, adding that the peak of her Asian gig was in the late 1980s, when she moved to Bangkok to freelance, working for up to a dozen outlets.

“I had a wonderful time doing it,” she says. “Met amazing people and wrote a lot of stories. I think it gave me an extraordinarily wide base, I became a journalistic jack of all trades, covering all manner of subjects, because my livelihood depended on it.”

But by late 1989, after nearly two years in Thailand, she became interested in re-engaging with her Japanese roots.

“My father, Peter, as a long-time journalist and later editor of the Australian Financial Review, had been closely involved with Japan as a correspondent in Tokyo and then as editor,” she says.

“When I moved to Bangkok, I met the then-Nikkei correspondent in Thailand, and a few other Japanese journalists. The Nikkei subsequently offered me a job to work on its plan to relaunch the old Japan Economic Journal as The Nikkei Weekly, a broadsheet that the company eventually hoped it could turn into a daily.

“The offer was tempting, and in 1990 I moved to Tokyo to join the Nikkei Weekly.”

Robinson left that job in 1993, and shortly after joined the Financial Times, where she worked for almost 18 years.

When she left the FT in June 2013, she planned to quit journalism and join Chulalongkorn University’s think tank. But she still had contacts with Nikkei and coincidentally, the day she quit the FT, a former Japanese colleague from her Nikkei days called and asked her to help set up the Nikkei Asian Review, a weekly magazine and around-the-clock website.

She has now been with the Review for just over four years and the publication has earned regional regard.

She points out that the Nikkei group has differentiated itself from mainstream Japanese media by being the only Japanese group to have acquired 100% of a key western media organisation, the Financial Times, while also taking stakes in other media outlets, such as Monocle magazine.

She says, “A factor behind the Nikkei’s acquisition of the FT in July 2015 was the group’s desire to learn from the FT’s ways of covering the world and of doing business.

“Nikkei has made no attempt to change the way the FT does things. Rather the influence is the other way: there has been a huge push within Nikkei to move the organisation to a more ‘western style’ of editorial and business management.

“In practice this means adopting a more ‘digital first’ strategy, devolving more decision-making to key editors, and trying to encourage more cooperation and integration between English- and Japanese-language sides of the operations.

“Overall, though, I’d have to say Japanese media is still known for a more cautious and rigid approach towards news, commentary and business coverage than mainstream western counterparts.”

While the weekly magazine is an important part of NAR’s identity, she has moved into the brave new world of online media, bidding a fond farewell to the old days of print dominance. “I guess as a veteran ‘hackette’ I do miss print media, as it used to be,” she said. “And I still love reading physical newspapers, particularly on planes and when I’m in transit.”