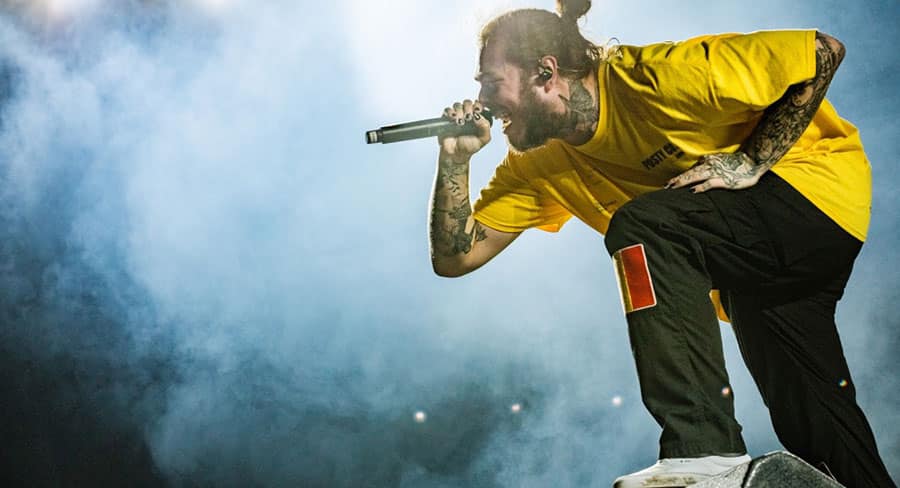 With a sixth week at #1, Tones and I is just one week away from a significant ARIA milestone. Her single Dance Monkey is now equal second for most weeks a #1 on the ARIA Singles Chart by an Australian female solo artist, joining Kylie Minogue’s I Should Be So Lucky (#1 March 1988) and Merril Bainbridge’s Mouth (#1 May 1995). If Dance Monkey can hold at #1 for another week it will equal Kylie’s Locomotion (#1 August 1987) record of seven weeks on top. A month-long Tones and I national tour starts next Friday in Adelaide and ends with a special homecoming night in Byron Bay.

Just one song debuted on the chart inside the top 50 this week – Circles, a track from Post Malone’s new album Bleeding, which was released on Friday. The song is Malone’s ninth top 10 entry and the fourth track to chart from the new album this year.

A handful of songs slipped into the top 50 from lower down the chart:

Taylor Swift has proven hard to nudge from the top of the album chart on previous releases, but this week Tool managed to dislodge her new album Lover from #1 with its first album in 13 years, Fear Inoculum.

The album is only the band’s fifth in a long career. Tool took over the album chart just last month when their previous releases flooded the chart after being released to streaming platforms for the first time.

Swift spent a second week on the album with Love at #2.

While there was little new release action on the Singles Chart, the Album Chart rarely disappoints, and there were nine new releases debuting top 50, four of them in the top 10.

The rest of the new arrivals are:

#3 Tones and I with The Kids Are Coming EP. The six-track release features Dance Monkey, two other previous releases and three new tunes.
#4 Lana Del Ray with Norman Fucking Rockwell! The US singer-songwriter’s previous four albums have all peaked at #1. Bit of work ahead for NFR if it is to keep that record intact.
#6 G Flip with About Us. The debut album from the Melbourne singer-songwriter and multi-instrumentalist Georgia Flipo features all the singles she released during the past two years.
#13 Lil Tecca with We Love You Tecca. The US rapper’s first mixtape and his first Australian chart action.
#19 Montaigne with Complex. The second album from the Australian singer-songwriter-musician after her first peaked at #4 in 2016.
#21 DZ Deathrays with Positive Rising: Part 1. The fourth album from the dance-punk trio from Brisbane who are touring Europe this month. They are playing shows in Australia during October.
#40 Ash Grunwald with Mojo. The 12th album or EP since 2002 from the prolific Melbourne blues musician.
#43 Paul Kelly & James Ledger with Thirteen Ways to Look at Birds – a mix of folk-rock and poetry reading inspired by birds, with sing-songwriter Paul Kelly and composer James Ledger leading the way.