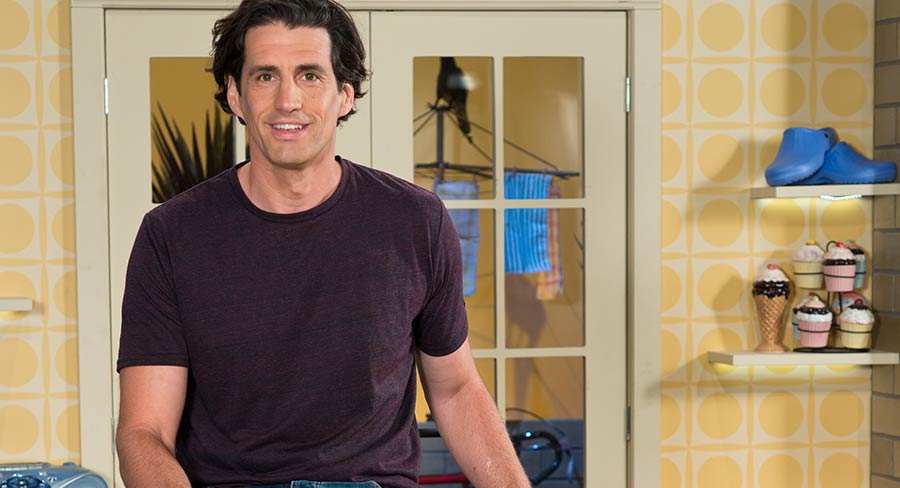 After dominating the TV first quarter of 2019 with Married At First Sight, Nine has reset its sights on Q2 with Hamish Blake and Andy Lee the major initial drawcards.

Although the radio-turned-TV stars work better together, Nine is lucky enough to be able to get the triple play this year with each star featuring in their own series before they come together later in the year.

Blake was first to air this week as the host of the new Lego Masters with three episodes in its initial week.

Lee follows on Wednesday night with the second season of Nine’s version of Talkin’ ’Bout Your Generation.

See also:
‘It’s going to get messy!’ Shaun Micallef on Your Gen season 2

Asked about how he was finding working on various projects these days after focusing on radio for so many years, Lee told Mediaweek: “It feels very grown up.” [Laughs]

The second season of Talkin’ ’Bout Your Generation has all been finished which means Lee’s focus in now on Hamish and Andy’s “Perfect” Holiday.

Talkin’ ’Bout Your Generation is hosted by Shaun Micallef with Lee, Robyn Butler and Laurence Boxhall the team captains.

Despite this being the second season of Your Gen, Lee said it still feels pretty new. “The pleasant thing about this season…and I hope it comes across onscreen…is that knowing each other better after the first season, makes this new series a lot stronger. Andy Lee with his Your Gen colleagues and guests from the first episode – Angourie Rice, Christian O’Connell and The Veronicas

“It is a little like playing board games with couples you have just met. You tend to not be as competitive. When family and friends are playing, the snide remarks are better, there is more at stake and there is a bit more fun.”

Lee is coming to grips with being the Gen Y captain after years of being on of the hottest young things on radio and then TV. “Thank goodness I didn’t just slip into Gen X. Imagine being Robyn Butler [Gen X] – that would be awful. I also know that for people sitting on the other side [with Laurence Boxhall Gen Z] they are eventually going to take Hamish and my jobs. I try to give them as little encouragement as possible, telling them TV is way too hard and they should give up.”

While each team captain has a guest from the same demographic each episode, watch out for episode four this season. The guests that week are Red Symons, Pete Rowsthorn and Tina Bursill. “We had a bring your baby boomer to work day,” explained Lee. “The oldies do get their opportunity. It was a very long record because we had to stop for naps and afternoon supper.”

He indicated that having two livewires in host Shaun Micallef and Rowsthorn running amok that episode makes for a great TV.

Lee said he was lucky this season with some great Gen Y guests. “We went from Brendan Fevola one week to a Veronica the next. We had both Veronicas and they were very entertaining with their bickering and competiveness. Watching them fight with each other and then a few minutes later, like many sisters, having forgotten all about it, makes for fascinating viewing.”

Talkin’ ’Bout Your Generation is Lee’s first major regular solo role. He admitted he and Hamish get offered many things. “We have made a career out of saying no,” he said. “A lot of those shows have never seen the light of day. Occasionally some shows we look at and go, ‘Glad we didn’t do that.’ There has only been one show that we said no to that went on to be a fantastic show. And I think we might have made that show worse to be honest.” He declined to share with us what that was!

“We love making our own shows, that’s what gives us the most excitement,” Lee said, indicating he is not about to sign up to work on more solo projects. “Working with Radio Karate – [with creative and business partners] Tim Bartley and Ryan Shelton – is where we focus our energy.

“When other opportunities come up they have to fit them into that and that is why we haven’t said yes to many.

“We had a bit more time in the past two years with the break from radio and less travel.”

While Nine’s Travel Guides has rightfully been getting plaudits for drawing big audiences to a new genre, the show is by no means the first to successfully exploit a combination of fun and travel. Hamish and Andy have been doing it for years and will do again later this year.

“Our show will be very different to Travel Guides,” explained Lee. “There is always a fascination with travel, as there is with food. While food has been done to death, with travel there are always more places to go and more people to meet. In more remote places people are doing unique things to create their own fun and that is what Hamish and I like tapping into.”

While True Story is having a breather in Australia, the format is living internationally with Tim and Ryan looking after business with regard to that format. “It’s work that Hamish and I try to avoid,” said Lee. “We don’t like admin.”

They are also deep into pre-production on Hamish and Andy’s “Perfect” Holiday. The team set off later in May to film the episodes. He was reluctant to reveal where they would be heading.

Lee continues to appear semi-regularly on radio with guests spot on Triple M’s Kennedy Molly drive show. He also still records a weekly Hamish and Andy podcast which he says remains so much fun. “We always knew we were going to miss radio and we feel like it is our natural habitat – chatting to each other in a small soundproof room. We love the feedback to the podcast we are getting from listeners here and overseas.”

One of the guests on the first episode of Talkin’ ’Bout Your Generation is new Gold 104.3 breakfast host Christian O’Connell. The former London DJ credits/blames Hamish and Andy for helping him make the move to Australia. We asked Lee how he felt O’Connell has been adapting to his new home.

“He is going well. He’s a natural broadcaster and I’ve been a fan of his for a long time. He still needs to learn to talk about AFL in a convincing local manner…he will get there. We have a lot of time for that breakfast show, partly too because Jack is part of the team.” Jack Post, aka Caklin’ Jack, was part of the Hamish and Andy team for a decade.