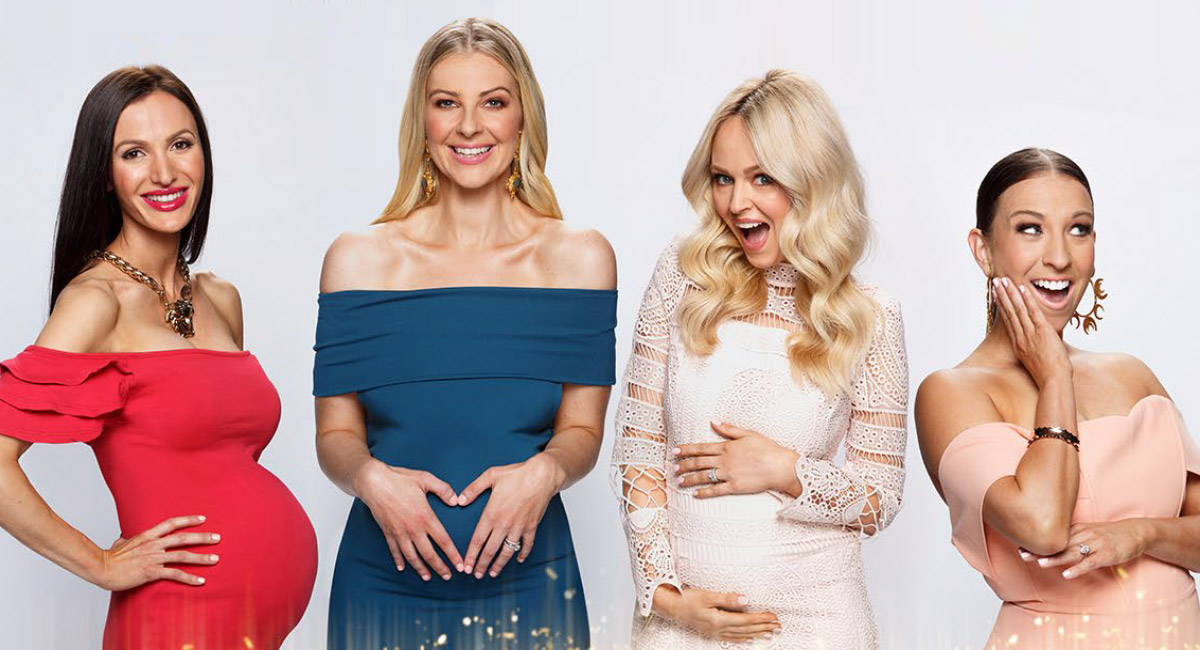 Once upon a time, in a land far, far away (Adelaide suburbia), a (self-proclaimed) queen called Maria DeGeronimo (well, this is a cartoon), prepared for the birth of her impending princess by putting a crown over her (ridiculously expensive) cot and stuffing her (walk-in wardrobe) room with designer clothes (Versace, D&G, Boss, Chanel and many more in what could be the greatest product placement show of all time) bought clothes for child up to the age of 14 (yes, really)!

Because Queen DeGeronimo appeared to have no friends, she did what any modern girl would do and reached out to three total strangers called the Yum Mums… on Instagram. Together with her mother Margherita (who appears to be angling for her own spinoff show called Gruesome Grannies), they began planning the biggest Burberry (product placement) Baby Shower of all time by looking for inspiration… on Instagram. Margherita screamed at one pic and declared that her daughter must NEVER have a baby shower with a yellow theme because that would make everybody look like chooks (although nobody seemed to notice that Margherita was wearing a yellow dress while saying this).

Meanwhile, the Yum Mums decided they had nothing better to do (except prepare for the births of their own babies because in an incredible fairytale coincidence, all three of the “friends” were also pregnant!) so they decided to fly from Melbourne to attend the baby shower even though they would know nobody. Next week, will any of the mummies’ husbands speak? Or are they just there to hand over cash to buy “push presents” (i.e. diamond rings) for their wives’ vaginas? The End.

Interesting programming for this huge new show given it must premiere up against the grand final of House Rules on Seven. Maybe the strategy is to deliberately start it in the middle of school holidays to hook the kids in, and that’s smart, because without them, this won’t fly. I haven’t seen the first episode yet but the promos are impressive. It looks like Gladiators for a new generation, but on steroids in a bigger outside set. Getting the odd celebrity in (The Footy Show’s Beau Ryan and The Bachelor’s Tim Robards) should be fun and spare us from a spinoff show Australian Celebrity Ninja Warrior.

This is being advertised as the TV premiere of the big screen movie that was released into cinemas at Easter. But given this broadcast only runs for 20 minutes, this must be just the Australian bit as the famous pig and family travel to the Outback, throw boomerangs with a kangaroo called Kylie, and then learn about coral on the Great Barrier Reef. The rest of the movie was padded out with regular 10 minute episodes you would see on TV but even then, it still struggled to reach a one-hour running time. But for some kiddies, this was their first time inside a cinema so hopefully they will enjoy watching it again on their laptop where this will surely be popular on iview.

Jimmy McGovern is the genius who created Cracker and then helped shape Redfern Now into one of the greatest Australian dramas of all time. His last TV series was the British Australian co-production Banished, which lasted only one season amid claims it ignored the indigenous population that our first convicts undoubtedly had to deal with.

So now he is back to more depressingly familiar turf with this BBC drama about a priest, played by Game of Throne’s Sean Bean. Sadly, it is rather similar to The Street, another of his Northern-based series which aired here on Showcase and was tough going. McGovern clearly has a point he wants to make about today’s society and the way it leaves the vulnerable poverty-stricken and prone to doing disastrous things, but until he finds a way to lighten the load with a laugh or two, this is getting too big a cross to bear. And while this first episode features the gorgeous Anna Friel, she spends most of the episode sporting a bloody eye and a face covered in bruises. Grim and grimmer.

All Round to Mrs Brown’s – 8.30pm Thursday on Seven

Activist actress Pamela Anderson, tennis coach Judy Murray and singer James Blunt drop round to Mrs Brown’s house in this latest incarnation of the wildly successful Irish sitcom (which has also spawned a feature film, stage show and huge-rating Christmas specials). Similar to The Kumars at No. 42 (and our local version Greeks On The Roof with Effie), this will only appeal if you find Mrs Brown funny but given Seven is now licking its wounds over the badly received Behave Yourself, it needs a good laugh.