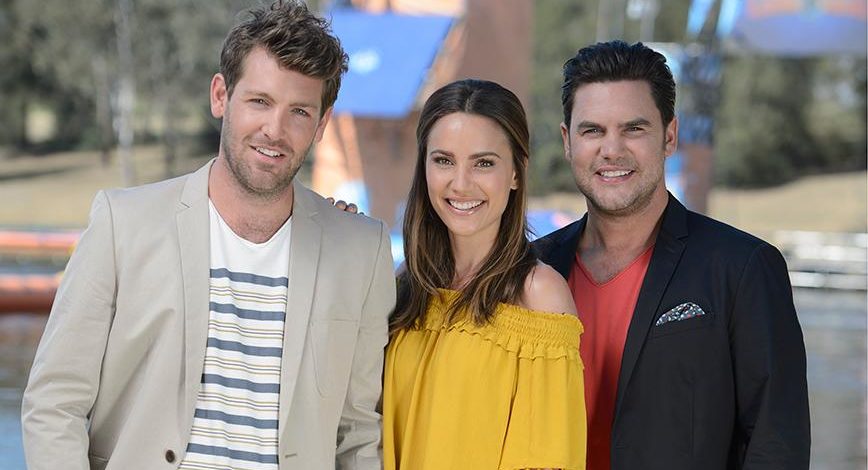 Congratulations, Seven – here we were thinking Yummy Mummies would be the worst show of 2017, but nobody realised you still had this little gem gathering dust on the shelf. Despite being filmed last year, and before Australian Ninja Warrior, this is going to come across as a cheap rip-off as pairs of idiots slide down inflatable water slides while the hosts yell out “Cannonball”. And that folks, is the entire show.

Wonderland cast members Tim Ross and Ben Mingay are another pair or idiots who will never host another TV show after this, and may indeed find trouble getting acting work too. This is so bad I just assumed it must be a school holidays non-ratings period but I have been assured this is not the case. But is Seven trying to burn it off as quickly as possible? Hell yes – now everybody yell “Cannonball”!

No previews for this on the ABC media site but this week its religious program looks into the LGBTQI rights movement. What perfect timing, and a perfect host with the gorgeous Julie McCrossin of Good News Week fame at the helm. As a 78er herself, meaning she was in the first Mardi Gras Protest march, her interview with another 78er, Peter Murphy, should be very enlightening. Oh, and by the way, SBS, after years (and years) of young hosts squealing inanely because it was their first Mardi Gras parade, maybe it’s time to put someone with some actual experience in the chair for the 40th anniversary next year. Julie McCrossin, I hope you get a call soon.

The Beeb has always been good at honouring its comedians with entertaining biopics. And with news just in that Game of Thrones star Aidan Gillen will portray Dave Allen next, it’s perfect timing to watch this interesting take on Carry On icon Dame Barbara Windsor. Some UK viewers were nonplussed with this unconventional approach to tell her life story, as Babs (Jaime Winstone) reflects on her life, with ghosts of her past, in a crummy theatre at the arse end of her career (just before EastEnders took her to the top again). And at one stage, the real Babs pops up playing herself, just like she did in 2000 in the telemovie Cor Blimey which focused on her love affair with Sid James.

Will & Grace – streaming from Friday on Stan

How brilliant is this going to be? 16 brand new episodes 11 years after it ended – so forget about that ridiculous flash forward finale because, just like the new eps of Roseanne coming soon, that ending never happened and will be addressed in the first episode to get it out of the way. The only other info we know is that Karen’s maid Rosario is not in it (actress Shelley Morrison has retired), Grace has divorced Leo (Harry Connick Jr) and is back living with Will, and guest stars Bobby Cannavale and Minnie Driver are also back, along with a famous new one – the more-than-LGBTQI friendly Michelle Obama. Can. Not. Wait.

Ten million viewers were enthralled by this true story council estate kidnap drama when it screened in the UK and I can’t figure out why. This is one of those kitchen sink dramas to slit your wrists to but with just two episodes, at least it’s brief. One can only assume that the English will always watch anything depressing as long as the cast is quality – and it really doesn’t get any better than lead actress Sheridan Smith from Mrs Biggs and Cilla. There is nothing glamorous about her role this time round, but she is superb, as always.