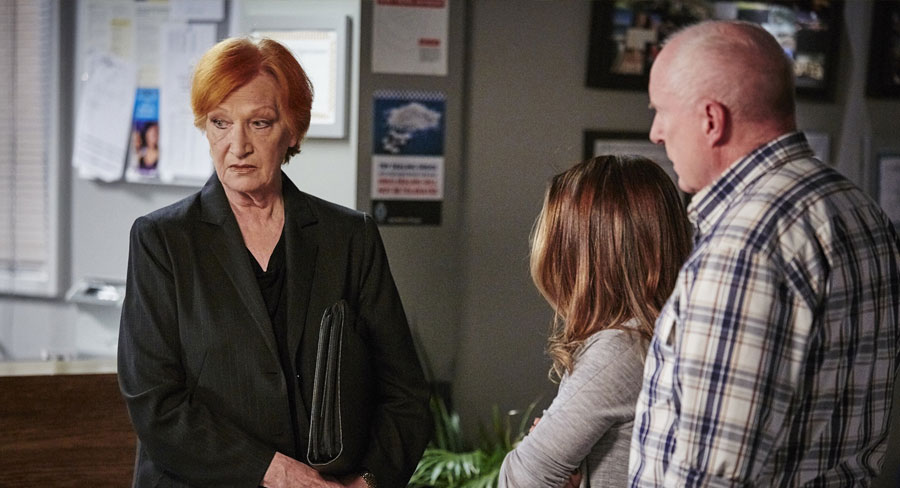 Cornelia Frances always thought she got cast as no-nonsense, tough, scary women because of her hair colour. That meant she was typecast, but that also meant years and years of constant work in four iconic TV series. Yes, there were periods of unemployment, but she always saw the lighter side of it, even naming her autobiography “And What Have You Done Lately”, which was a nod to enquiries from others actors, and customers who would wonder why she was sometimes working at a winery.

Her breakthrough role was in 1976 on The Young Doctors. From the very first episode, when she gave young nurse Jo Jo Adam (Delvene Delaney) a good dressing down, Sister Grace Scott became a force to be reckoned with. The character could have been a one-dimensional authoritarian but Cornelia Frances’s skill was always in showing the vulnerable and lonely side of her ladies. Sister Scott became a bitch that the audience were secretly rooting for, and she needed that sympathy given years of being tortured at St Alberts Memorial Hospital by terrible men who raped her or left her at the altar. Falling down that elevator shaft, however, was strictly her own fault.

In the 80s, Frances popped up on another Grundys soap, Sons and Daughters. Somebody needed to be able to stand up to Pat the Rat (Rowena Wallace) and that turned out to be Barbara Morrell, who went on to marry Patricia’s former husband and became Barbara Hamilton. Staying with the Seven Network, her next iconic role was in Home and Away playing Morag, the sister of Alf Stewart (Ray Meagher). Being a judge also meant that Morag was able to be called back again and again over the years, given Summer Bay’s propensity for attracting delinquents.

Amazingly though, there was one other milestone in her long career when she parlayed this character type into hosting The Weakest Link. Most quiz show hosts are themselves, but this format required Cornelia to play to her type yet again. And yet anybody who met her in real life knew that she was the opposite of these TV personas and was actually a warm and funny person. So to all of her fans, and everyone who worked with her over the years, what a loss she is to the TV industry.

Mystery Road hit cinemas in 2013 and was the best Australian movie of that year. Three years later it spawned a sequel, Goldstone, and now Mystery Road is on ABC TV and iview as a six-part TV series. Like the movies, it has another all-star cast (including Judy Davis, her husband Colin Friels playing her brother, and Deborah Mailman and John Waters but not hooking up like they did together in Offspring). And thanks to director of photography Mark Wareham, it remains visually stunning to watch, especially with its constant use of aerial shots looking down onto the parched countryside.

For me, the second movie veered just a little bit into unbelievable territory, but this new TV mystery seems more grounded and it really grabs your attention right from its opening frame. Based on the movie-length opener (combining eps 1 and 2), this could be the best Australian drama of the year.

Racism is at the heart of every Mystery Road story. Detective Jay Swan (Aaron Pederson) is treated warily by his own people because he works with whitefellas, who in turn treat his methods of working with suspicion. Given the ABC’s commitment to diversity, it is no surprise they decided to adapt these movies into a series.

What is really surprising though, is the speed at which America’s ABC network cut Roseanne Barr loose after a racist tweet. The Disney-owned, family-friendly network cancelled its highest-rating show within a few hours and all Roseanne re-runs were also pulled off every TV network and all streaming services. Locally, TEN and ELEVEN followed suit, meaning Australian fans of the show will never see the rest of the rebooted series.

• Cancelled! So how many people were actually watching Roseanne in Australia?

Roseanne’s mouth has regularly got her into trouble but the speed at which she has been dethroned is dizzying. Couldn’t the show have sent her away or killed her off, like when Valerie Harper was sacked and her sitcom Valerie became The Hogan Family? A Roseanne-less show called The Connor Family would still have John Goodman, Laurie Metcalf and Sara Gilbert, which is still one hell of a cast, or is Roseanne too huge of a presence to even consider moving forward without her? Roseanne’s comment was abhorrent but I am sad to see her show wiped from history. For all her wacky conspiracy theories and bad jokes, she has always been a contradiction and an enigma, who used her sitcom to educate fellow rednecks and Trump supporters about left-leaning issues such as gay marriage, trans rights and America’s substandard healthcare system.

Would an Aussie ever get fired today for making a racist remark like Roseanne did? Eddie McGuire made a tone-deaf joke about Adam Goodes and King Kong in 2013 and yet he is still hosting his radio show. And since then, he has also returned to the AFL Footy Show alongside Sam Newman, another entertainer who has survived numerous misogynistic and blackface moments.

Recently, an Aussie media outlet, with the help of some 1980s comedians, was complaining about living in a too-politically correct world. But until a massive entertainer like Roseanne suffers the same fate down under, they can all rest easy. They should, however, consider themselves warned. Because it won’t be a mystery if some big mouth gets kicked to the road one day. Until then, just watch Mystery Road.

Top photo: Cornelia Frances plays Morag in Home and Away