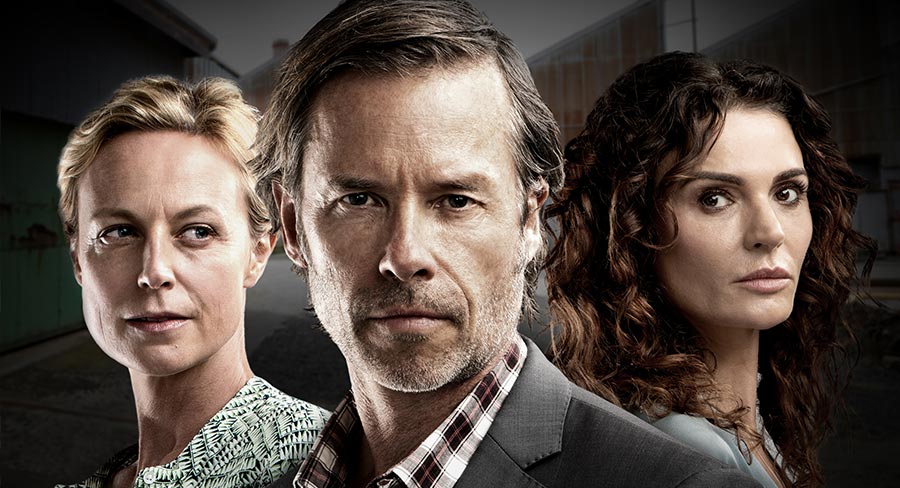 ‘It is a wonderful time for established writers, a difficult time for younger writers.’

In the second part of our look at the new season of ABC’s Jack Irish, Mediaweek spoke with writer/producer Andrew Knight. He is a longtime collaborator of producer Ian Collie, who we have also featured this week. As well as their work on Jack Irish, the two collaborate on Rake. When Mediaweek spoke with Andrew Knight recently he was about to depart Canberra after a day of action to promote the Make It Australian campaign.

When asked if he’d been lobbying, he replied, “Lobbying and drinking. It was good to catch up with people, even if there were many whose names I couldn’t remember.”

As to the effectiveness of the Canberra visit, Knight said: “It was terribly pleasing that there both Liberal and Labor politicians at the event who gave us their time and were very receptive. I really felt they were listening. Whether that translates to something I don’t know. I was impressed by both sides of the House in that they were both overtly supportive.”

Knight is a very busy and much in-demand screen creative, and he told Mediaweek he very much loves working on Jack Irish. “I do it with a lovely bunch of people. The writing department boasts Matt Cameron, who also produced this series, plus Elise McCredie and Andrew Anastasios. They are all friends and Guy Pearce is a friend as well. We also have the best crew of really top film people who also love doing it. “I just love the cast and I have worked with Marta Dusseldorp a thousand times. I keep saying I won’t do another one…” [Laughs]

Knight wrote two episodes in this second season as did Cameron. “Elise and Andrew also each wrote one.”

When asked about taking on the dual roles of writing and producing, Knight commented: “I’m now nudging 200 years old and the weight of production gets to me after a while. I love just the writing part. I hate not having some sort of final creative input into a series.

“I don’t demand total control, but I like to be able to give opinions and argue my points. If I am committed to a project I usually want slightly more than a writing role.”

Jack Irish had a writing room with the four writers in there for some considerable time, Knight explained. “We try to work out how the series will play. As a group we come back later and argue each scene and make changes where necessary. Elyse and Andrew had just as much clout in that room as we do.

“Writers rooms can be horrible, but this had just a lovely feeling in the room. We enjoy each other’s company and we laugh a lot.”

It is an irony that drama can be more pleasing to work on than comedy, which can be oh-so difficult. “Oh god, comedy kills. I did sketch comedy for way too long. The thing about drama is that no one has a specific expectation. People may not like it, but they rarely hate it. With comedy there is a specific requirement to laugh. Everyone has a different sense of humour and everyone thinks they are funny. People can be perversely angry when you fail to amuse them. That’s why I have lapsed into [writing] drama with lashings of humour in it.

“The feeling of an obligation to always be funny is agony.”

There is plenty of comedy mixed into Jack Irish as Knight explained. “On ABC budgets we couldn’t afford to make a spine-tingling, chilling thriller. We have to use our money effectively and the best single way to do that is to have funny scenes in a pub which are conversational. Then we could spend the money on some slightly bigger action sequences.

“The audience seems to relate to the humour and how you step back in time every time you enter that pub or to the racetrack with Roy Billing or Aaron Pedersen.” As to the state of drama on television in Australia, Knight understands how the commercial networks are struggling. “There are so many gateways for content now and the advertising dollar is being spread very thinly. They are competing against people like Netflix, Amazon and Google who don’t have content quotas.

“The playing field needs to be more level.”

The ABC is currently home to most of the best dramas, with Knight admitting the broadcaster had been great to him.

Knight noted ABC managing director Michelle Guthrie joined the creative activists at their Canberra event and she said the broadcaster is looking to train new writing talent on longer-form productions.

“There isn’t currently a great opportunity for new talent. When I started with John Clarke [on the late 80s crime comedy series The Fast Lane] we got two series and we made a thousand mistakes, but we learned each time we did something.

“It is a wonderful time for established writers, a difficult time for younger writers.”

Knight keeps himself busy with both TV and movie work.

“I am doing a lot,” he said. “I am doing a film with Scott Hicks, doing a film in England and possibly another film in America.” His recent films include King of Thieves, The Cartographer and Ride Like a Girl to be directed by Rachel Griffiths. He did let slip he was also talking with Mel Gibson about another movie. The two worked together on Hacksaw Ridge. He is also currently adapting The Wedding Officer for Jocelyn Moorhouse and Revolver Films and has two television series in development for British television and two more here.

Working across different projects can be a challenge. “My mind is well and truly segmented,” laughed Knight. “I write according to mood. If I am flatter and feeling more dramatic I will work on something like Hacksaw. If I am amused by the world I will do Rake.”