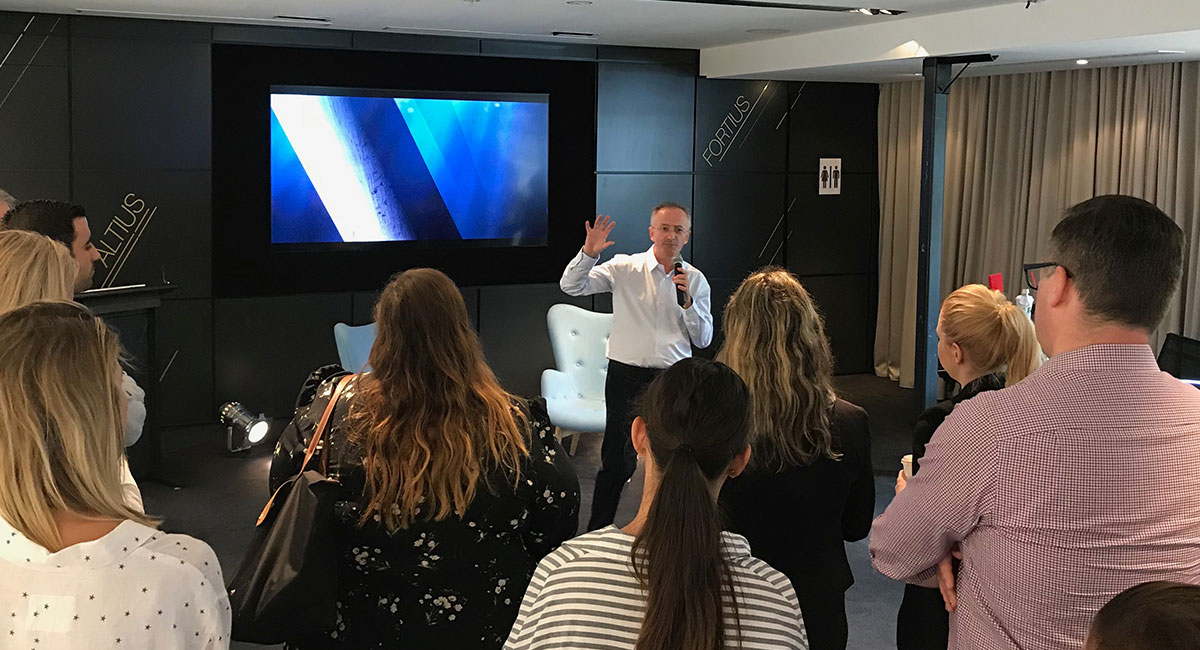 At a media briefing with Andrew Denton last week, he asked invited journalists to sit in the interview chair alongside him to ask their questions.

Here is a summary of some of the Q&As from the press conference.

Will people compare your new show to Enough Rope?

That ABC show was 10 years ago. People are 10 years older and there have been 10 years of stuff that has happened. Our challenge is to ask questions of the guests they will respond to genuinely. Toward the end of Enough Rope we thought we had probably done as much as we could.

Do you ever find an audience daunting?

Always… every audience. There is not a single show I have ever made where I don’t think at some point during the day, “God, I wish I wasn’t here… why am I doing this for a living?” I am always nervous. What really helps me in a show is not just talking to the guests, but talking to the audience in between interviews. I love that interaction and you just don’t know what you are going to get.

What is different from 10 years ago is the age of social media. It is easy to be destabilised by that because it is a powerful echo chamber. My way of dealing with that is not participating in it myself, although the show will.

I have worked with some very, very talented people, including our top comedians, who have very skilfully used Twitter.

But I have also seen the cost of that for them and that is not my personal way of doing things.” Life out of television

Television is a very exacting industry to work in. It’s professionally hard, it’s emotionally hard, it’s psychologically hard. Like most of the people I work with when I do it, I just throw everything at it. My decision to step back has always been a life decision.

I have always found when you do take time away you should just immerse yourself in something else. It is like a fallow field… you come back richer with a better crop.

I have enjoyed five years out of television.

Life back in television

I am now pushing into my late 50s and I’m really grateful to have a fantastic work opportunity and I’m taking it with both hands… and one slightly dodgy heart.

How do you deal with guests asking for restrictions on some questions?

Sometimes you can make a virtue out of that. One of our first guests on this series will be Robert Plant, who I have met before, and we were told one of his stipulations was he didn’t want to talk about Led Zeppelin or Jimmy Page. As it turned out he was fine about that. That made us think if he was not going to be comfortable about that, how do we get him into a space where he is comfortable.

How is your health?

I had surprise heart bypass surgery… it was definitely a surprise to me. As bad news goes it was the best news I could have had because essentially I am largely heart attack-proof for another 10-15 years.

I was told I could be very moody afterwards and maybe really struggle. To my delight and surprise I didn’t have a moment’s mood.

How similar will interview be to Enough Rope, which was loved by many?

The core of the show is the same – to try to have a great conversation with interesting people. I find the thought that many people loved Enough Rope mildly terrifying. With the new show we are starting from scratch and we have to earn people’s love all over again. People will be judging interview in many different ways – with the aid of social media, probably within seconds of the show starting.

Who is on your bucket list you are yet to interview?

There are many on that list. One of them is Rupert Murdoch – one of the most fascinating individuals that has walked the planet in the last century.

I would say “yes” to Donald Trump, but he seems shy. [Laughs]

On a show like this you never know who is going to surprise you and sometimes it’s not the big names – it can be somebody quite unexpected.

Are you a good interviewer?

On the pilots I have done so far there are none I would rate as a 10.

One of the criticisms I have garnered over the years, which always intrigues me, is that sometimes I am sycophantic toward my guests, which is about perception.

I always say that when you make a TV show you make three.

There is the one you intend to make, which is brilliant.

There is the one you do make, which can be anywhere from Enough Rope [a hit show] to Randling [not a hit show].

Then there is the third show, which is the one people see.