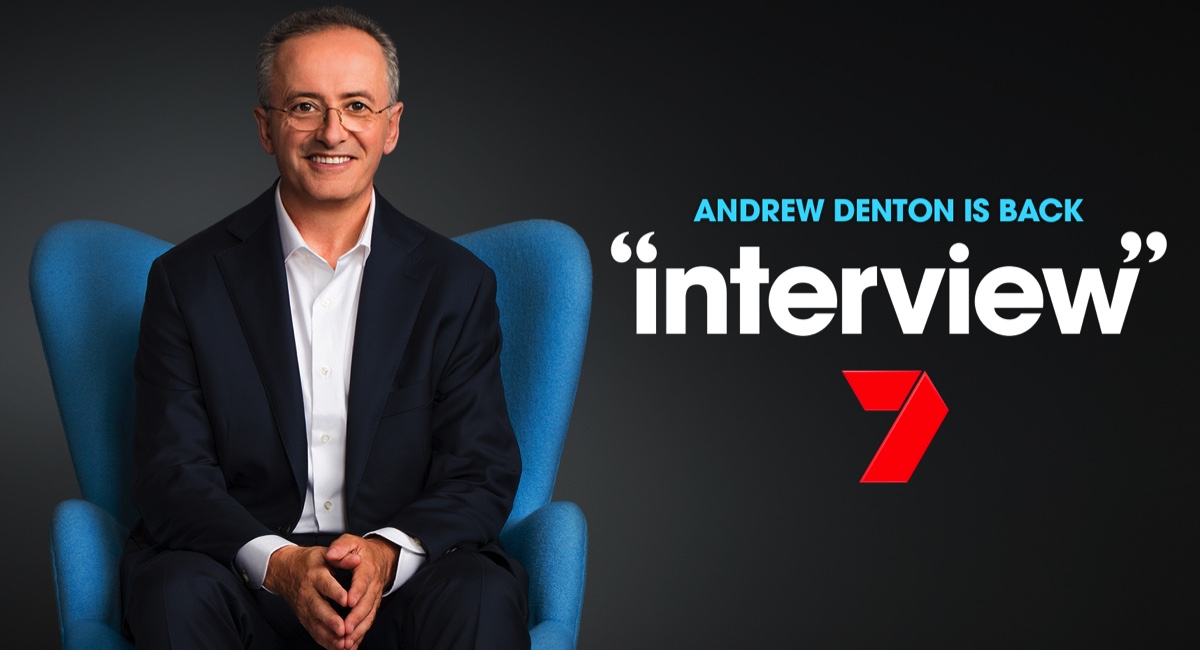 When: Launching Tuesday April 17 at 9pm
Guests: No reveal of who is on first, but Denton has already done interviews with Robert Plant and Ross Noble.
Episodes: No reveal yet of how long it will run, but expect more than 10 weeks, but less than 40.
Production company: Legacy Media

Andrew Denton is returning to television after a few years in the media wilderness. He has landed back at the first commercial network he worked for after leaving ABC TV where he hosted Blah Blah Blah, The Money Or The Gun and Live And Sweaty.

For his interview venture, Denton has formed a new production company called Legacy Media along with partners Jon Casimir and Peter Thompson.

Jon Casimir, who left his role as ABC TV head of entertainment to work again with Denton, said there had been lots of talking about interview and that it felt great to be actually doing it.

“When we came to Seven just over a year ago we explained there were a few things about the show that were very, very simple.

“One of them was this: Two people, two chairs, one conversation, no gimmicks. That is the formula for the show. We are not going to do anything incredibly complicated, but something we think is quite simple.

“We are going to do that because we think there is a gap. We could be wrong, but we feel there is a gap in the marketplace right now.

“We feel the world we have moved into is a shouty place. Our politicians shout, our social media is full of people shouting – often as soon as they can every morning – and a lot of TV programs shout at you. It is a very noisy world we live in.

“We won’t mind the odd bit of controversy, but we are not going out looking for it. It could be glib to say this, but we would rather look for the things that unite us rather than divide us. What is the humanity of the people we are talking with? What are the things that connect us?

“We wanted to make a simple interview show and that is why it has a simple name. We spent months on that name and there was a whiteboard with other alternatives on it. Some were slightly smartarse, but we decided to say what is just on the box in the spirit of being clear and simple, and wanting to have a conversation with the Australian public.” When Andrew Denton speaks about the new format, he notes first and foremost it is about entertainment. “It doesn’t work if it is not entertaining and entertainment can happen on many levels. It can be laughter, it can be anger, it can be passion and that is what I have always been going for in interviews.

“Even though I am perhaps best known for Enough Rope, all my career, back to Blah Blah Blah, has been about interviewing. When we have been doing some pilots for interview I have found myself sitting opposite the most extraordinary range of people and I am constantly surprised to hear them say the things they tell me.

“We do a lot of research for our interviews for obvious reasons. Firstly, because we want to work out what is the great story about this guest. It is also a mark of respect for that guest. The research provides the framework for a great conversation, but the truly great conversations are the ones that go totally off that framework. They are always the moments I am looking for.

“Seven is giving us a great opportunity with great support and great space to seek out all manner of people to put in the chair. What a lot of people are expecting and looking for is huge names. There will be huge names, but often they are not the great guests.”

“I am finding it is taking me a while to get back up to full speed. We don’t assume that because that show was successful this one will be. We have to earn the trust of the audience again and the trust of guests we want to come on the show.

“The really challenging guests are those I may strongly disagree with, who may hold a totally different world view to me. In this very shouty age where we have weaponised offence taking, that will be one of our biggest and most important challenges – to put people on the screen we may strongly disagree with, but to be able to try and understand at least why they think the way they do.

“This is a very bold experiment. If things aren’t working we are going to bring a fair bit of cooking and renovating into episode three and Pete Evans may be hosting by episode four.”

This is the first part of Mediaweek’s Five Days Of Denton.