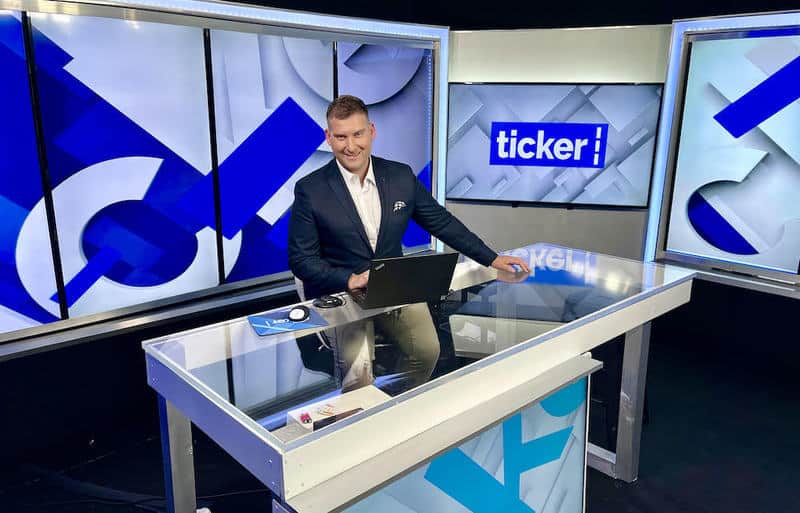 Launched 16 months ago by the former Sky News Australia reporter and bureau chief Ahron Young, Ticker has managed to find a sustainable business model that enabled the streaming and on-demand news service to navigate the challenges thrown at it by Covid-19.

As CEO and managing editor, Young has built a team of young, enthusiastic presenters and producers who work out of a custom-built facility in inner-Melbourne Richmond.

Ticker has been online since August 19, 2019. “When we launched we knew what we wanted to be, but everything was all over the place with regard to the business model,” founder Young admitted to Mediaweek as he prepares for a short Christmas and New Year break. 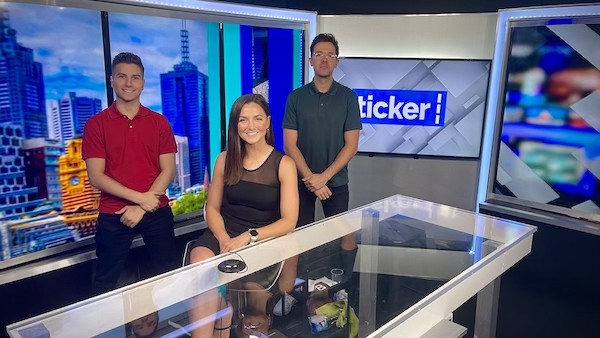 Young will be coming off presenting news hours to focus on expanding the business. “I will still host segments and breaking news, but no longer hosting a daily news shift,” he said.

This week Ticker welcomed Nova 100 newsreader Ash Gardner to the team (on top of her role at Nova 100 as breakfast newsreader). She’s filling in for McLean this week and will be involved next year too. “Ticker is looking forward to building the relationship with Nova and Ash Gardner in 2021,” said Young.

Another talented contributor is entrepreneur and AFR rich lister Fred Schebesta (below), who launched finder.com.au, he co-hosts Ticker Ventures with Adrian Franklin every week. Franklin is also hosting segments about cryptocurrency and investing for millennials. 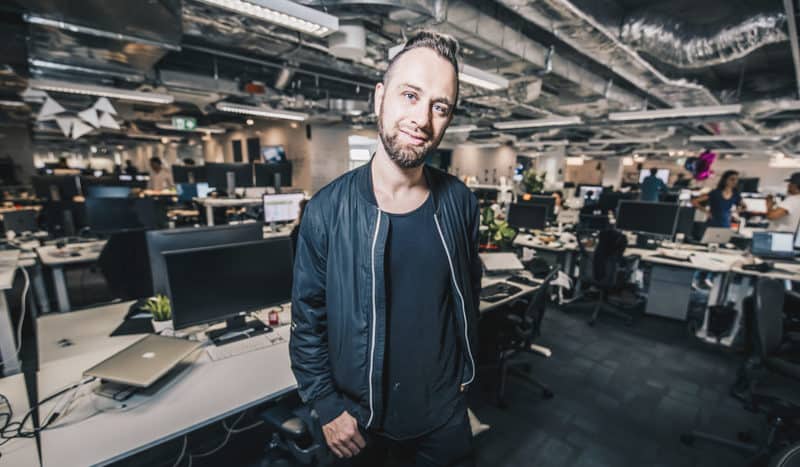 Anthony Lucas (pictured with Gardner and McLean) has joined as breaking news reporter.

They have been doing something right. Ticker started with Young and a couple of parttime assistants, but now the company boasts a staff of 20 with more to come.

“We learnt very quickly early on that people were not going to pay for a new streaming network. It is fine for the likes of Disney which has been around for a long time, but when you are brand new you need to be accessible which is the path we went down.

“We also quickly learned that people wanted breaking news as they could get opinion elsewhere. We also pivoted towards the international market. When you are online, what’s the benefit of only focussing on one market or territory?” 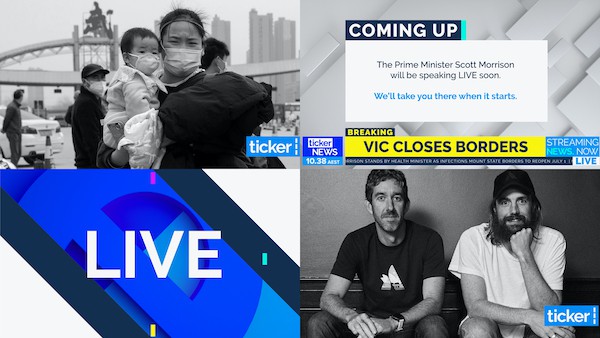 Asked to define the Ticker business model, Young mentioned multiple revenue streams. “The two I really focus on are partnering with generally medium-sized businesses that get behind our programs. We have branded sponsorship with the sponsor’s logo on air the whole time. The other thing we do is have a lot of news bulletins from 8am through until 5pm Monday – Friday. Those bulletins feature specialists who come on Ticker.

“We then offer opportunities for those people to reach their audience with their message. A little like how advertorials are important to morning shows, we do independent interviews with business owners – today we featured Amaysim and Optus – and some of those people take out packages where we target their audience using social media. We have found people respond much better to editorial interviews where someone is asking an insightful question, rather than just running an ad.”

“We use Google Analytics to make sure the content we are serving up is the content people are looking for. We can create video really fast with our team of presenter, producer and social media producer. We put breaking news content on-air within seconds and we can beat the major networks pretty much all the time. If you watch the Ticker Twitter feed you will see we are first before they are. We have stripped away all of the production problems that can get in the way.”

Ticker quotes some big audience numbers – a monthly reach over 4m – with Young explaining that was because they are clever with the use of social media. “Right from the outset we have been aware Ticker is an on-demand service as well as a live network. With offices closed for much of this year, we couldn’t rely on people having Ticker sitting in the background. We have worked hard to identify what people wanted – from breaking news, business, technology, climate change or entertainment – we focused on our audience and what they are after. It is one thing to have written content, but video coming up in peoples’ Facebook or Twitter feeds works wonders.” 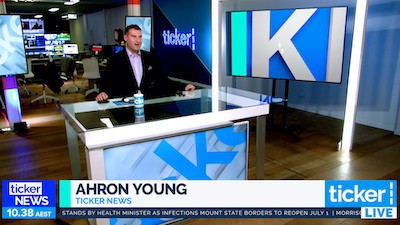 Young explained Ticker is careful not to launch something until it has been paid for. Ticker is ambitious about international opportunities too. “We have grown massively in the US and India,” Young said. “We are finding when people in those countries want to talk to the Australian market they are coming to Ticker.”

The US expansion will be helped by a new partnership with the NewsPlayer+ platform. Young: “This platform brings together the world’s best news channels and we will be on the same platform as Al Jazeera and Sky News UK. We have always had international ambitions and we plan to open Ticker offices around the world in the coming years.” Ticker is working at further partnerships, with some to be unveiled next year.

Young said this stems from his days at Sky News. “We didn’t have our own camera crews for many years, we had to come up with ways to source footage. There is so much video available from different sources.

“Ticker has grown so fast that we have really focused on exactly who we are. Ticker will be on air for 16 hours a day in 2021 – Australia’s first streaming news and business network. Breaking News on top of the hour, free and live.”

On the business side, Ticker now has an Advisory Board – people who know business and media very well.

Jed Bertalli, commercial director, told Mediaweek: “Over the past few months we’ve seen significant growth in direct viewership and engagement across all platforms, plus a huge number of downloads to our applications which results in even more eyeballs.”