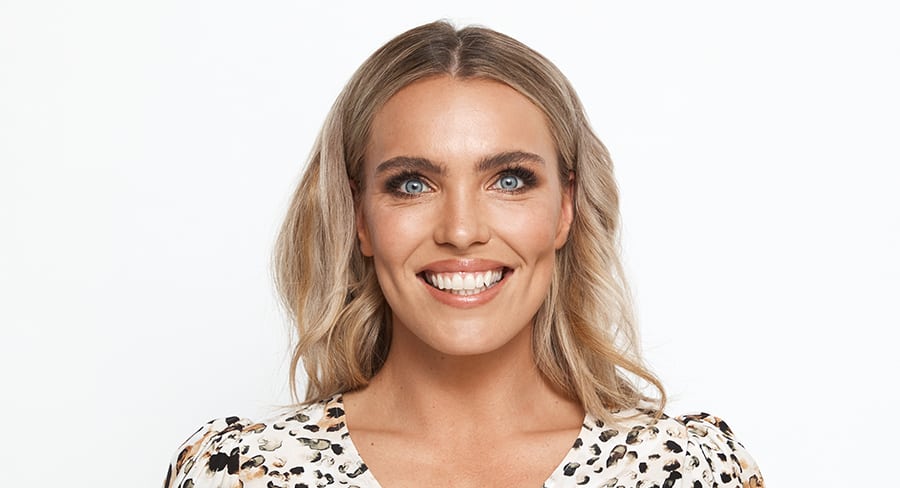 With both the AFL and AFLW seasons underway for 2021, it’s a busy time to be involved in footy. Seven commentator Abbey Holmes won’t only be working on the sidelines this year though, strapping on her boots to join the Hawthorn Hawks VFLW team as well.

Mediaweek spoke to Abbey Holmes about commentating games, returning to the field, and whether she’d be up for another season of Australian Survivor.

Holmes says that the transition into the commentary space came easily after spending her whole life around sports.

“I’m a footy-head first and foremost. I’ve got a die-hard footy-loving family, they’re Adelaide supporters being South Australians, so I basically had no choice in the sense that that was all I knew. I would, at that point in time, play netball on the weekends and my dad was president of a footy club, and that was our weekends day in day out when I was younger.

“I kicked 100 goals, I was the first woman in the country to do that and was just thrown into TV and radio interviews from that achievement. I haven’t studied journalism or anything like that, but it’s simply through my love of the game, my knowledge of the game, and through personally playing the game that has really lead me to where I am now.” 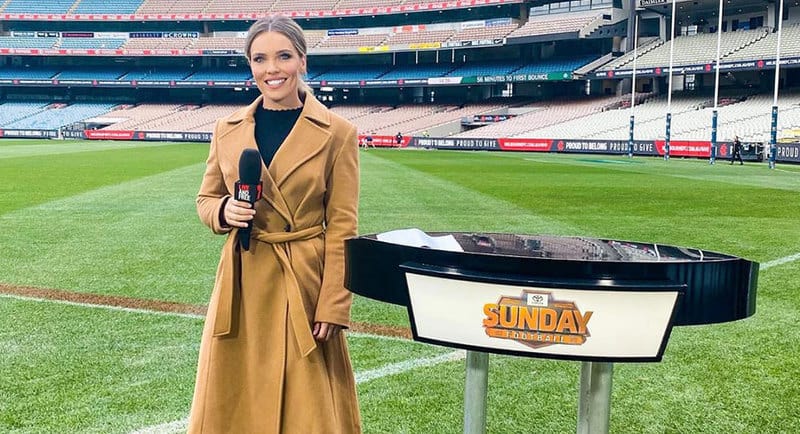 Working in the Darwin bubble

When the Covid-19 pandemic shut state borders all over the country, the AFL competition relocated into a Darwin bubble. Holmes was a part of the bubble after an isolation period and says that despite the chaos, it was worth it to be involved.

“I was very lucky last year in the sense that when football vacated Melbourne I kind of identified the fact that I didn’t think it was going to come back any time soon. I got out of Melbourne and did a 14-day isolation on our family farm in rural South Australia – which I loved, I had 450 acres to isolate on, so I was very lucky. Then after I completed that quarantine I was able to work in the SA, NT, QLD triangle completely freely.

“I was one of the only presenters that Seven could send out to travel last year because I got out of Melbourne. I felt like I was on a plane every second day, to be honest, between those three states and territories. It was a crazy year, everybody did so well and sacrificed so much to ensure that the competition went ahead and we were able to get a Premier in Richmond by the end of the season. It was a crazy, crazy year but I was really stoked to be a part of it.” 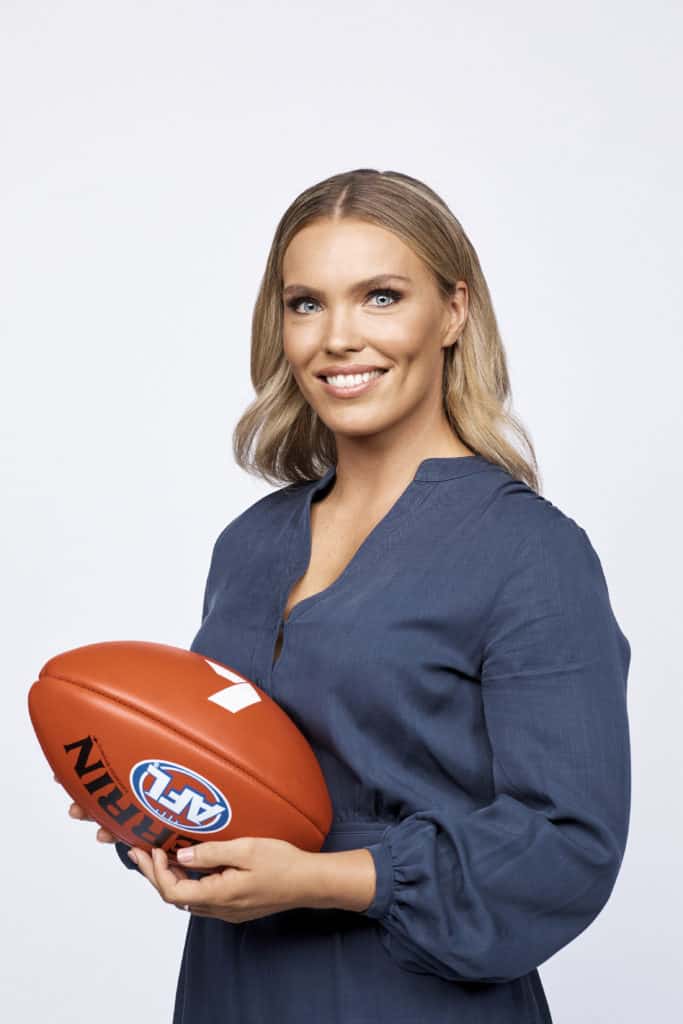 After two and half years since she last played footy, Holmes is joining the Hawthorn Hawks VFLW team for the 2021 season.

“I’d always wanted to go back and play but I wasn’t sure that my body could handle it, I’ve got a pretty dicky knee at the moment. But Bec Goddard, who was actually my coach at the Adelaide Crows for the first couple of years of the AFLW, she’s now the coach at Hawthorn. So she picked up the phone a couple of times and said ‘come on Abs, come and have a run.’ I hadn’t really thought about playing VFLW this year until Bec made that call.

“Hawthorn is at a really exciting stage in the women’s footy space, in that they’re pushing for a license in the AFLW, so it’s great to be a part of that and really try and help the younger girls who want to be there when that happens.”

Holmes will be keeping up with her commentary duties as well as her playing schedule.

“It’s going to be a pretty hectic time with work, let alone trying to pull on the boots and juggle my playing commitments as well. But I’m a very go-go person, I never stop really. I’m used to the pressures and hectic lifestyle around my work and footy, so I wouldn’t have it any other way, but it is going to take a bit of time management. We’ll make it work.”

After appearing on Australian Survivor for both season four and the All-Stars season, Holmes says she’d jump at the chance to give it another crack.

“You always feel like you have unfinished business if you don’t come away as the top survivor. It’s annoying in that sense because particularly in season four I did 46 out of the 50 days and was so close. But having the team sport background really did help me – I’m obviously a competitive beast and treated those challenges as I would crossing a white line on a footy field.

“It was really tricky in the sense that I’m used to coming from a team environment where everything is about playing your role in order for the team to be successful, whereas when you go into the game of Survivor, it was completely different. It was like I was playing an individual sport like tennis or golf where you’ve really just got to rely on yourself out there, I didn’t even have a coach or anything telling me what to do. So I really struggled with that side of things.” 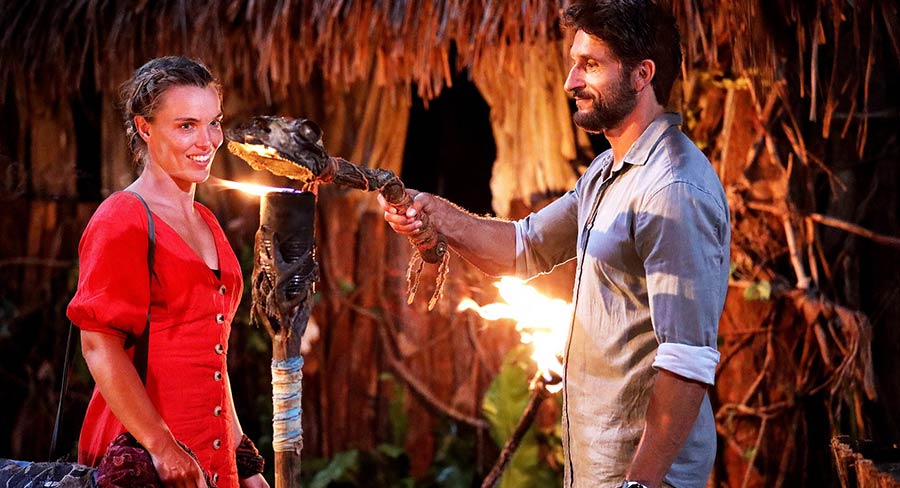 With Survivor sending its castaways to outback Queensland this year, Holmes says it’s a great opportunity to promote Australia.

“I’m so excited that Survivor is going to be here in Australia this year. Everybody’s had to adapt to the current global situation and make things work within our four walls of Australia, and I’m all about promoting everything that this amazing country has to offer.”