“We have about 10 major local show launches to come, despite having to shuffle dates around for Covid.”

With Network 10 reporting on its first half ratings performance today, chief content officer and EVP of ViacomCBS Australia and New Zealand Beverley McGarvey told Mediaweek: “The important thing for 10 is how do we continue our momentum in the back half of the year. Due to Covid we have all had to modify our schedules a little bit. The good things for us is that we still have Bachelor in Paradise, The Bachelor, The Bachelorette plus The Masked Singer and Junior MasterChef to come.”

After noting first half growth in both The Project and 10 News First, with five major reality formats plus Gogglebox, HYBPA? and the return of The Living Room, McGarvey is very confident about the future.

“We have about 10 major local show launches to come, despite having to shuffle dates around for Covid.

“The only thing that we don’t have is a second cycle of Australian Survivor which we were thinking about. We will still be screening five 7.30pm franchises in the second half and also have The Living Room returning at 7.30pm Fridays.

“We have started casting for The Amazing Race Australia, but it probably won’t be available until next year because of various border closures. The series will show off how amazing Australia is which will be the right time to do that.”

In her new role, McGarvey has more responsibility for driving revenue than previously. “Our sales team is doing a really fantastic job in what has been a really challenging environment. They are punching above their weight and are helped by the success of MasterChef. All the content coming in the back half is very established and our clients know it and want to be associated with the programs. The Masked Singer is an easier property to sell in its second year after people saw the format and just how well it did with audiences of all ages.

“We also have some sport in the back half including the Melbourne Cup.”

McGarvey also mentioned the subscription TV brands MTV and Nickelodeon which she noted also help strengthen 10’s under-50 proposition. Two brands that have also been linked to 10’s forthcoming third multichannel. McGarvey said that new fourth channel will be contributing share to 10’s network numbers some time in the second half. Presumably an announcement can’t be far away. 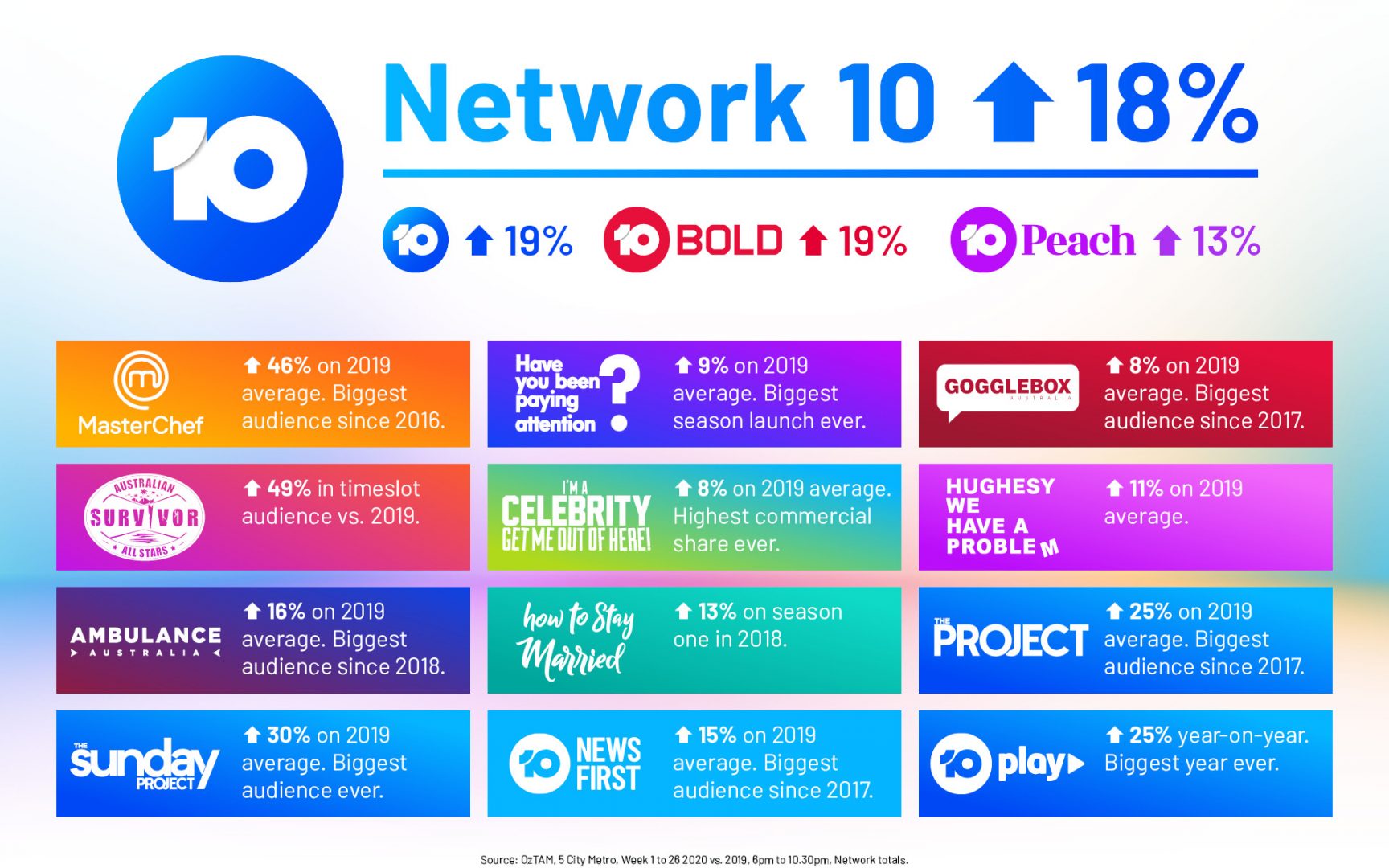 Network 10 has achieved its biggest first half commercial shares in nine years, capturing a bigger share of total viewers and viewers aged under 50 and in the key demographics of 25 to 54s, 16 to 39s and 18 to 49s since 2011.

Network 10 and Channel 10 experienced the biggest growth across the first half of any network or channel in Australia year-on-year.

What needs to perform better?

McGarvey has always been frank about what could be working better at 10. There is still a list, although it’s smaller than it has been.

“The 6pm slot has been a real challenge for us. The 6pm News is performing better than we have been doing in recent years and it has been consistent which is important. It is also helping The Project at 6.30pm.

“An area where I would like to see some growth in the second half is Friday and Saturday nights. The new episodes of The Living Room will do well. What I have seen is really fun – the team is so lively and have such great chemistry.

“We have in recent weeks seen some Saturday night growth thanks to The Dog House which is the best-performing show on a Saturday night we’ve had in years.”

The success of a stripped-down MasterChef The returning contestants have been driving the success of MasterChef this year as it posts its best overall numbers in five years. Some nights there has been little at stake with no outdoor team challenges, cooking for crowds or celebrity chef visits. Keeping it simple has been working a treat.

McGarvey: “Because of Covid we have had to stop a lot of regular features and everything has had to happen in the MasterChef kitchen. Covid has forced us to go back to basics, giving us more time to see the character of each of the contestants, see their relationships with each other and it has all worked in our favour.

“At the beginning of the pandemic it was all quite challenging for us all as we tried to get our head around the changes. It forced us to be creative and the innovation has led to some new things the audience has loved.”