Digital will continue to be the key growth driver in Australia

Zenith has forecast a slight downgrade, with ad revenue for 2017 in Australia now estimated to grow by +2.9% (versus +3.4% in the prior forecast). While the revenue forecast is behind 2016’s growth, it is still above the overall economic growth forecast for Australia in 2017. Here are the highlights from the Zenith report:

• Digital will continue to be the key growth driver in Australia, with an estimated revenue increase of +10.4%. It is anticipated that digital revenue will account for over half of all billings in 2017 (52% share of spend versus 48% in 2016).

• Out of home continues to perform well off the back of increased inventory, digitisation and tech development. Radio and cinema are stable while the print format continues to be impacted by the shift to digital.

• TV is sorely missing the federal government election spending last year, but is also under pressure from falling audiences as more revenue shifts to video in line with changes in consumption.

• Overall, sectors contributing the most volume in terms of ad spend growth include Automotive, Retail, Alcoholic Beverages and Technology, while Government, Media, Real Estate, Travel and Food have declined. 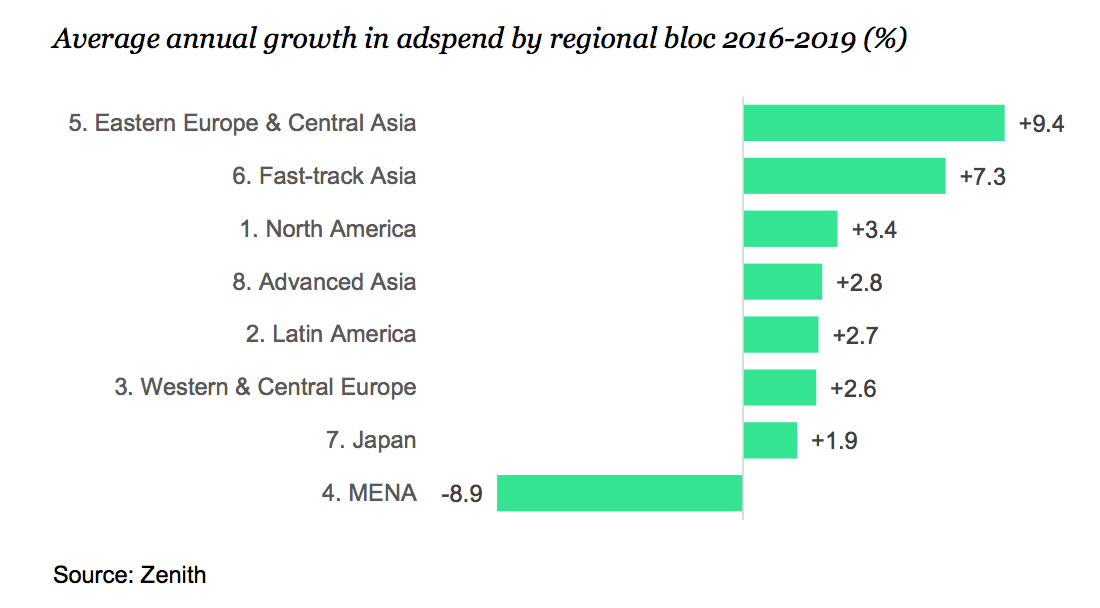 • Paid search and classified are still growing, but are lagging behind

Paid search was the largest internet advertising channel until 2015, when it was overtaken by display. Much of its recent growth has come from innovations in mobile and location-based search, and future growth will come from adapting search ads to voice-activated personal assistants like Siri and Alexa. Expenditure on paid search totalled US$78bn in 2016, and we forecast 10% annual growth to 2019, when it will reach US$103bn. Growth in paid search will therefore lag behind growth in total internet advertising, which will grow at 12% a year.

Classified advertising – advertising on dedicated web pages without editorial content, often for cars, house and jobs – was an important part of the early internet, but its share of total internet expenditure has been shrinking for many years as users have turned to free listings, auction sites and other substitutes. In 2016, advertisers spent US$17bn on internet classifieds, and we expect this total to rise by just 7% a year to US$21bn in 2019.

• Television and online video consolidate their lead in brand advertising

We distinguish between television and online video advertising because they are distributed differently, generally sold differently and categorised differently by third-party agencies that monitor advertising expenditure. But for many consumers they are beginning to blur together as smart TVs and other devices deliver internet content to households’ main TV sets.

Advertisers are also finding that it makes less and less sense to plan television and online video separately – they work best as complements rather than substitutes. Television supplies reach, while online video offers targeting and personalisation. Together they are becoming more important than ever to advertisers seeking to build brands. Stripping out classified and search – which are essentially direct-response channels – television and online video accounted for 48.5% of expenditure on brand advertising in 2016, up from 43.7% in 2010, and we forecast their market share to rise to 49.3% in 2019.

We forecast that global advertising expenditure will grow 4.0% to US$558bn by the end of 2017. This is down fractionally from the forecast of 4.2% that we made in June.

Next year we forecast 4.2% growth in global ad spend, boosted by the Winter Olympics in Korea, the football World Cup in Russia, and the midterm elections in the US.