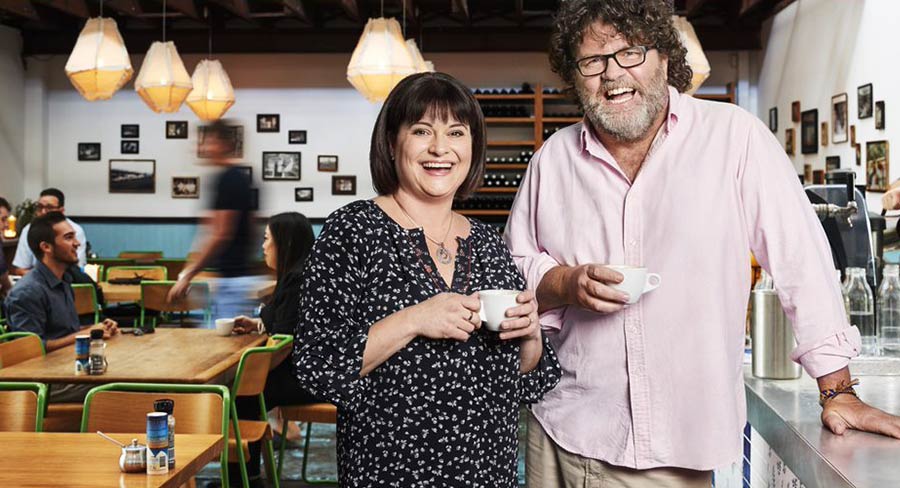 “It’s a small media community in Perth and we all know each other.”

It’s not ideal to take some sickies on your first week in a new job. But that’s what Russell Woolf did this week as he returned to WA radio co-hosting breakfast at ABC Perth.

Woolf’s co-host Nadia Mitsopoulos hosted the show solo on Tuesday and Wednesday after Woolf was laid low with a virus. When he spoke with Mediaweek he explained he was pretty keen to be back on board for Thursday’s OB at Kings Park.

We told him not to stay away too long as Mitsopoulos sounded pretty good on her own.

Woolf was in his mid-20s before a light bulb went on in his head telling him he should be in radio. “I was never quite sure what I really wanted to do until then,” he told Mediaweek from his sick bed and under heavy medication. (His answers have been edited accordingly!)

Woolf promptly enrolled in a radio course at WAAPA (Western Australian Academy of Performing Arts). He spent one year working in the family business until the next enrolment and soon found himself volunteering at Curtin Radio.

For the last six weeks of the course he found paid work at the ABC. “This was the early 90s and I was given the chance to work on the Country Hour which was iconic radio. It was brilliant and we worked on equipment which has long since disappeared from the industry.”

He then started his radio journey, with a first full time gig in Esperance, WA with RadioWest. “It is the most magnificent place you will ever visit.”

Next he moved to Kalgoorlie with RadioWest, which was marginally closer to Perth.

Woolf eventually made it back to Perth and got a job co-hosting ABC Perth afternoons with Verity James for his first metro gig in 2000.

After Woolf hosted afternoons for two years he was given the chance to host ABC Perth drive. “I did drive in Perth for nine years during which time the ABC moved buildings.

“After drive I took some time out. To keep my skill levels up I did Saturday morning breakfast for a year. My wife then took a job in Minneapolis and we moved there for just over three years.”

Last year Woolf returned to fill-in on Perth breakfast. He hosted during a big week for the ABC as he explained:

“On the Monday Michelle Guthrie was sacked, on Tuesday Peter Bell (the breakfast presenter I was filling in for) resigned and on Thursday Justin Milne departed.

“It was fortuitous that I was there that week. If I was away when Peter resigned I would like to think I might have been considered for the gig, but being there was handy.”

Woolf returned home to the US and was asked to apply for the vacant breakfast role and management subsequently appointed Woolf and Mitsopoulos.

As the new hosts started their new show, Woolf’s wife was still in the US.

“The relationship has never been better,” he laughed.

Woolf’s wife is a much-in-demand specialist who works on environmental approvals with mining companies.

The new Perth breakfast team – seven of them in total – began planning in earnest earlier this month.

“I looked around and thought ‘this is a fantastic team’. I know everyone really well and am confident in all of their abilities having worked with them closely in the past.”

Woolf said the ABC had a brief for the show to cover four hours – 6am to 10am – but the team was allowed to mould the program to suit what was needed to fill those hours.

As with other ABC metro markets, the show breaks for news bulletins and AM.

“The show is of course very local. We want to hear from Perth people about what is happening to them and finding those good stories is key to success in Perth.”

Woolf said there is no fortress Perth mentality though and people there don’t have a chip on their shoulder. Although in the next breath he reminded Mediaweek how WA carried the Australian economy for many years.

Woolf knows his new co-host Nadia Mitsopoulos well and is thrilled to be working with her. “For much of the time I was presenting drive, Nadia was producing mornings with Geoff Hutchison. [Hutchison now hosts the ABC Perth drive show.]

“It’s a small media community in Perth and we all know each other.”

Woolf reeled of a long list of people his knows well having worked with them earlier in his career from Steve and Baz at 6PR through to many of the commercial radio breakfast hosts working for ARN, SCA and Nova.

If a commercial radio station hired Russell, it would almost be obliged to call him Woolfman in the Morning. However it is a nickname he’s never been lumbered with.

“I am friends with Lawrence Mooney and I like Moonman. I would definitely be Woolfman at Breakfast or Woolfman in the Morning [he starts howling].

“A lot of people think I have a made up name for radio, which really pisses off Dennis Howard Woolf, my father.

“I do get Woolfy a little bit from some callers.”