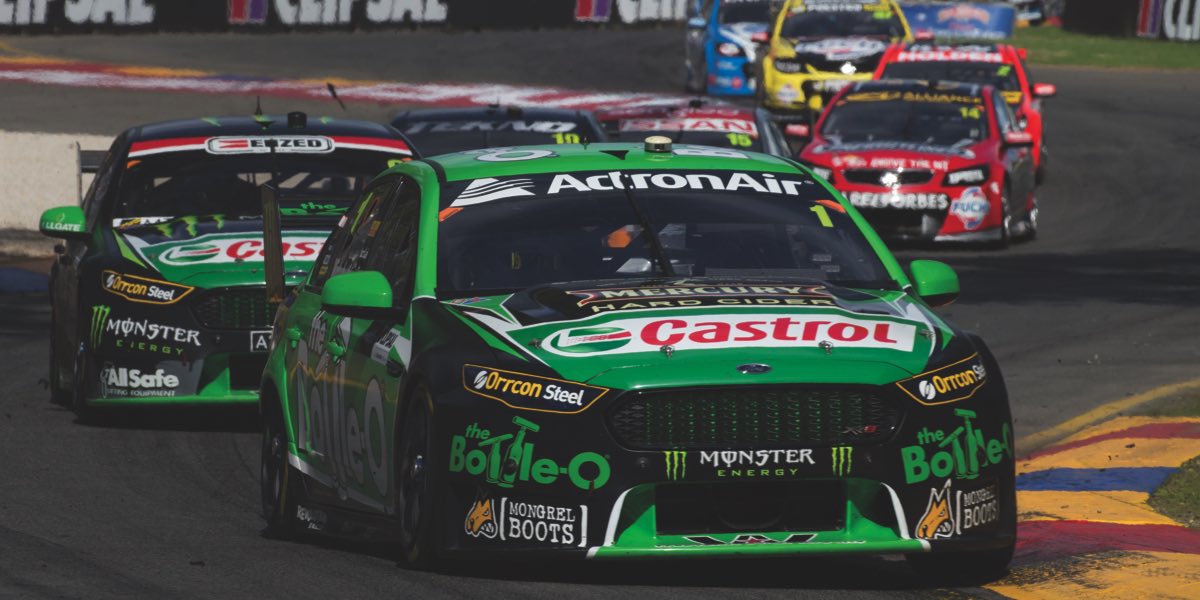 The chief executive of one of Australia’s biggest sports was not wrong when he told Mediaweek that people are often surprised and sometimes staggered by the size of the sport.

Visiting the first race of the 2016 season as a guest of broadcast partner Fox Sports, I was late for our interview with the sports executive because it took me so long to navigate the route from the entry gate to the V8 Supercars (V8SC) truck that is his mobile office on event weekends. Along the way you pass grandstands filling with fans, a huge stage where Icehouse was doing a sound check and an almost endless row of tents and caravans offering everything from BMWs to Foxtel packages to every fast food imaginable.

James Warburton has been the CEO of the V8 Supercars operation since 2013. The sport started its 2016 season with one of its biggest weekends of the year – the Clipsal 500 meeting in Adelaide. The showcase events of the weekend are two championship races of 125 kilometres each on Saturday and then one championship race of 250 kilometres on the Sunday.

“If you look at our 16 race meetings we attend [including the Formula One which is a showcase event], we have just on 2m attending. Of that annual total, Adelaide accounts for just over 250,000. We replaced the Formula One in Adelaide in 1999. Since that time the South Australian Government [which partners with V8 Supercars for the Adelaide event] has calculated around $490m of economic stimulus and 4m racegoers.”

While motor racing has traditionally been held on outlying race tracks, Warburton noted for many of the V8SC weekends, they bring fans closer to city centres and make it a core offering for different cities around Australia. Alongside Adelaide, the other biggest events include Gold Coast, Homebush and Bathurst.

Later this year the competition will move to Kuala Lumpur for the second time, this time racing through the city centre for championship points after an exhibition event last year.

“We generate our income through ticket sales, sponsorship, sanction fees from governments and tourism bodies, and of course media rights.

“In conjunction with our broadcast production partner Gearhouse, we are one of the biggest employers of production people in Australia.”

Most of the race meetings feature wall-to-wall TV coverage across three days. At Adelaide coverage was on Fox Sports across four days, with live and highlights coverage on TEN too.

As well as mounting the car racing events across the weekend which include Supercars and a couple of other classes, V8SC offers lots of other entertainment events to ticket holders from a collection of cars from classic Hollywood movies through to the massive rock concerts staged after the Saturday and Sunday competition.

As for international growth plans, Warburton notes it will always be an Australian series that races a couple of times internationally each year. “Asia is the sweet spot for us for both the time zone and the cost of freight. We need two 747s to transport all our gear for a weekend and if we start travelling too far the costs get too high. Malaysians really love V8 Supercars. Thailand is another country where they really love their motorsport.” 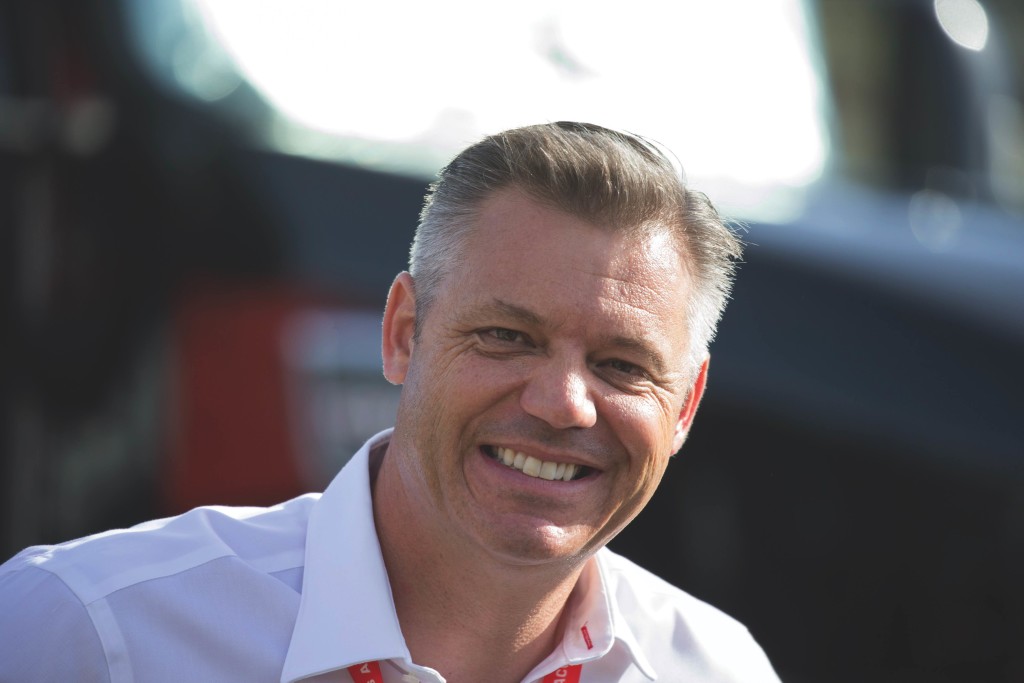 Before taking on the higher profile role of a TV executive, James Warburton worked as marketing director of Hyundai before joining Universal McCann (UM) where he worked as managing director.

It was a good time for the media agency with account wins including the Federal Government and Coles.

Warburton was then hired by Lachlan Murdoch to run Network Ten. A court case managed to delay his move, but after he arrived he lasted in the role 12 months, not being able to lift the ratings as quickly as the board had hoped.

Warburton was appointed to CEO of V8 Supercars in mid-2013.

Working with his media colleagues

Whenever there is speculation about senior media vacancies, Warburton’s name is usually on the list. However he seems to be having fun where he is. He still sees some of his former TV colleagues.

“I seem to get written about when I have lunch with David Leckie.” His years at Seven ended with a court case aimed at stopping him moving to Ten. Warburton had a partial win and Leckie gave evidence, some of it called ‘’defensive, imprecise and garrulous’’ by the judge.

Warburton calls Leckie the best boss he has ever had. “I completely understood what Seven did and why they did it. It wasn’t personal.

“Within several months of leaving Ten I was working with them again on the rights attempting to do a new deal. We work with Seven now on the Bathurst 12 Hour. I still talk to all of them.

“[After leaving Ten] I was back seeing Hamish McLennan [Warburton’s successor at Ten] about the media rights soon after departing.

“There were no problems with Lachlan Murdoch [then Ten chairman] about getting permission to take the V8SC role [which meant ending his gardening leave early].

The sport manages its own digital activity and pumps out a massive amount of content from its team across the year. “We have almost 700,000 Facebook followers and we are only second in sharing rate to the AFL.

“Our v8supercars.com.au is the second most-trafficked automotive website behind carsales.com.au. The commercial opportunities for partners there are enormous.”

The sport has been without a naming rights sponsor for a number of years, but that is about to change revealed the motorsport boss. “We will announce a naming rights partner in a couple of months. That five-year deal will start in July this year. The last one we had was Telstra’s Bigpond.

“We also have the opportunity for every single race to be sponsored like we have with the Clipsal 500 Adelaide. We then have official partners in various categories in everything from fuel for the vehicles to beverage rights at the events.”

The business annually turns over north of $100m with events in every state and territory plus New Zealand and Malaysia this year. The sport’s respective government partners measure the total annual economic stimulus at $250m. It is estimated that the business returns about $24m EBIT.

Warburton noted the strength of the sport nationally, commenting that while NRL and AFL were the leaders in their respective states, V8SC is a strong number two in those markets.

“We distribute all of our profits back to our owners, Archer Capital, and the teams.” Archer Capital owns 65% and the racing teams own 35%. The teams are paid a fee to ensure they have enough money to race.

“The botched TV deal in 2013/14 put the sport on its knees,” recalled Warburton of Seven’s final rights package. “One of the most important things for any code is the television deal. Getting our [current] deal across the line had underpinned the sport until 2020.”

For 2016, V8SC’s media production team has been working closer with its domestic broadcast partners Fox Sports and Ten Network. “What we have decided to do is to give it a seamless integrated approach to deliver one feed from the start of the weekend to the finish. This was our first weekend with that and we have been getting good feedback on it.” Ten will use its own commentators at different points across the weekend, but for the racing they will take the Fox Sports hosted feed. Viewers might have noted a cleaner graphic look with simple V8SC branding.

IMG distributes the TV content globally. “We are in 97 countries with a viewing potential of 275m homes. We are in the US, through Europe and across Asia.” Warburton indicated there is room for those international TV audiences to grow.

Warburton said there was never any real concern from the organisation or the teams with the initial ratings from the Fox Sports coverage. “About 70% of our TV audience comes from the six major events that Fox Sports and Ten simulcast. We believe our audiences will grow. The rounds that are exclusive to Fox Sports also get four hours of highlights on TEN and ONE.

“At the end of 2015 we reported the numbers. When you compare to the audience Seven got for only the races in 2014 and what Fox Sports and TEN did, for the entire year we were down 200,000 viewers. When you look at everything we broadcast with the additional days and the additional content, we were up 13.3m viewers or 29%.

“That coverage turned a lot of fans to avid fans.”

“It was a very emotional thing for some. We were one of the last major sports to go from a FTA-only sport to a FTA and subscription television offering. The fans that I have spoken to that have taken up the subscription appreciate the offering with the HD and the ad-free race coverage. If people didn’t want to subscribe they had to learn where the highlights packages were.”

Fans were certainly getting the chance to watch much more. “It’s not just about V8 Supercars [when you get the Fox Sports package]. It’s about also getting NASCAR, Formula One, MotoGP, AFL, NRL and everything else they have got.”

Warburton also noted the sport has been helped by the Foxtel 2014 price cut and the new NRL deal with every match live. “We have huge duplication between our AFL fans and NRL fans.”