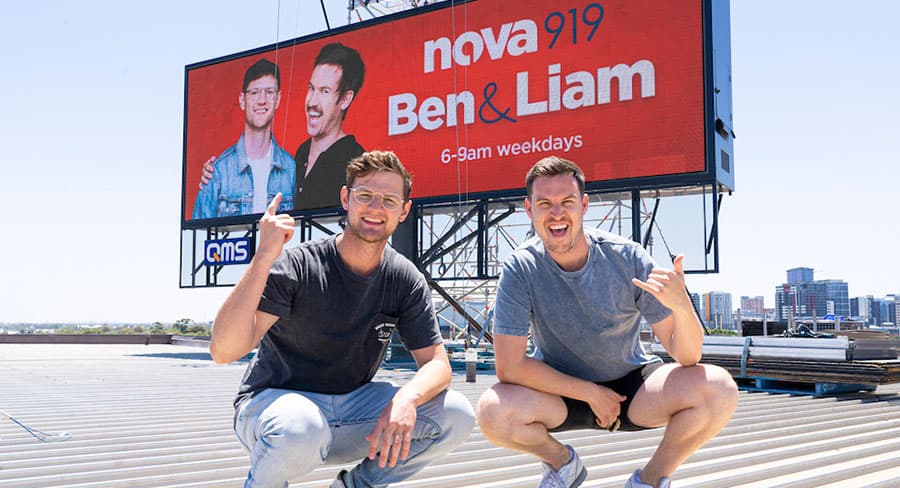 In a world radio first*, Nova 919’s Ben & Liam are taking their breakfast show to new heights with a broadcast live from a branded billboard, on top of a building in the Adelaide CBD, on Thursday 4 February.

A crazy idea, years in the making, Ben & Liam said they have always dreamed of doing their show from a billboard and now this is set to become a reality.

Ben & Liam: “We can’t believe we convinced the bosses to give us a billboard to do whatever we want. We thought instead of a picture of us, why not chuck our actual selves on there to give people the authentic experience.”

Ben Latimer, Nova 919 head of programming said: “I was a little worried when Ben & Liam came to me wanting creative control of one of our billboards, but I must admit I’m very impressed with the idea they’ve come up with. I can’t believe they’ve actually been able to make this happen and can’t wait to see how it all comes together.”

The Rydges South Park has also thrown their support behind the duo, providing the digital billboard on top of their building for the boys to suspend themselves from for the live broadcast.

Tim Kennedy, Managing Director of MediaNest said: “When Ben & Liam came to us with their crazy idea we wanted to do everything we could to make it happen. We pride ourselves on innovative solutions for our clients so it was an opportunity too good to pass up. We’re excited that with the support of the team at Rydges South Park and Nexstage that we could bring the idea to life.”

Ben & Liam will be suspended live from a billboard located on Rydges South Park, corner West and South Terrace. Listen to Nova 919 for all the action on Thursday 4 February from 6am to 9am and follow the progress on Nova’s socials.

Disclaimer – The Human Billboard is, to Ben & Liam’s best knowledge, a world radio first (or so they said)