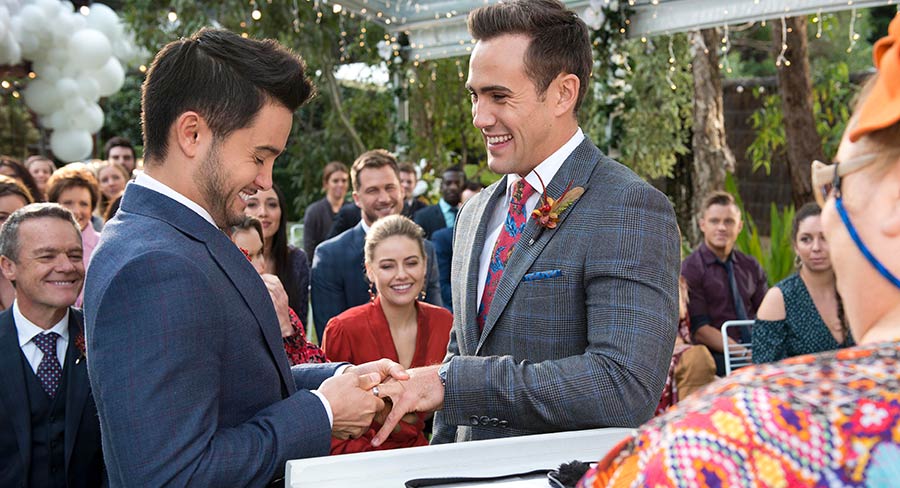 The wedding of David and Aaron will air tonight at 6.30pm and continues tomorrow on ELEVEN.

The day Ramsay St fans have been waiting for is finally here. David Tanaka will marry Aaron Brennan in an emotionally charged, iconic episode of Neighbours tonight at 6.30pm on ELEVEN.

The nuptials of David Tanaka and Aaron Brennan will be led by television and film actress, comedian, writer and one of the most prominent faces of the Marriage Equality campaign in Australia, Magda Szubanski.

Neighbours actor Matt Wilson, who plays Aaron Brennan, said: “We are both ecstatic to be part of this huge moment in Australian television. It stands alone as the highlight of my career thus far and to top it all off, we get to work with Magda Szubanski – please excuse my fangirl-ing.

“This storyline means a lot to me, to my friends and to all the fans we hear from on a daily basis who love Aaron and David. Thank you to the writers for giving us this opportunity.”

Neighbours actor Takaya Honda, who plays David Tanaka, said: “It is an absolute privilege to be a part of what is and will be a historic moment in Australian television.

“Hearing Magda would be playing our celebrant was fantastic news. What a perfect icon of Australian television and the LGBTQIA+ movement to share this moment with! Representation matters for us all, and I am so happy to be doing what I do right now.”

The wedding of David and Aaron will air tonight at 6.30pm and continues tomorrow on ELEVEN.